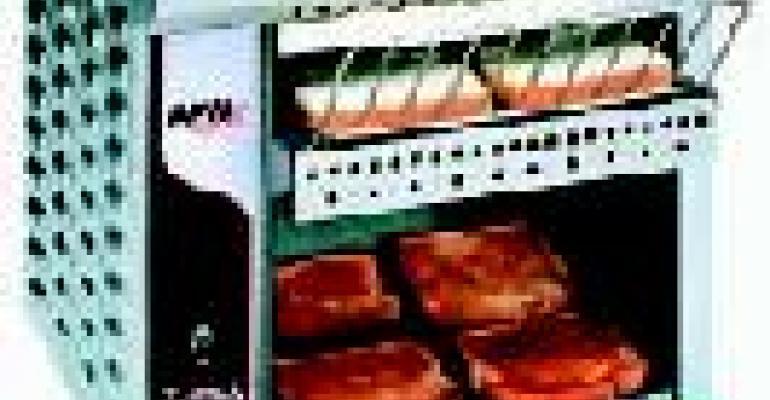 You're Toast Without A Good Toaster

Toasters are essential equipment for any operation that serves breakfast and sandwiches. As a foodservice operator you're looking for equipment that can produce a golden brown product as quickly as possible.

The most common toaster is the pop-up model, although the types used in commercial applications have considerably higher outputs— and prices, which can be as much as $1,100. The commercial model will toast faster and stand up to the wear and tear that will be encountered in a commercial setting. Controls, heat elements and overall construction of a commercial unit are made for heavy use.

A typical four-slice commercial toaster weighs between 18 and 20 pounds and is made of heavy-duty components and stainless steel. Domestic models only weigh between two and three pounds and have many lightweight plastic components. Although it may seem cost-effective to buy the home version, keep in mind that home appliances are generally not permitted in commercial food operations.

Conveyor Toasters. If your toast volume outgrows the pop-up unit, you'll want to consider a conveyor model. Conveyor toasters are popular in many places where volume is high or bread sizes vary. Conveyor toasters are generally larger in size and rated for a higher toasting capacity. Typical capacities as rated by the manufacturers are between 250 and 380 slices per hour for a four-slice pop-up machine and 400 to 1200 slices per hour for various conveyor models.

However, manufacturer ratings are based on ideal conditions and probably aren't practically achievable. Rated capacities do not take into account loading and unloading time, varied bread sizes and other variables and they're also based on using drier day-old bread, which toasts faster. As a rule of thumb, estimate toaster needs based on about 70 percent of the manufacturer ratings. If your volume expands into needing a conveyor unit, note that the cost difference between a basic conveyor and a fast pop-up unit isn't significant.

Any pop-up or conveyor toaster can produce acceptable product. To determine the toaster appropriate for your needs, look at the features offered and the associated price. We'll examine some of the features you may want to consider.

If a pop-up toaster is in your capacity range, consider whether a unit with mechanical or solid-state controls better meets your needs. A unit with mechanical controls uses a timer for toasting, so you'll need to shorten toasting time when the toaster is already hot from previous toasting. On the other hand, a unit with solid state electronic controls adjusts toasting time and temperature, creating uniformly toasted product batch after batch without changing the doneness setting. The price for solid state technology, as you might expect, can be half the toaster's cost.

Many plug-in toasters are available in either 120V or 208/240V versions. If the toaster's location may move around from time to time, a 120V model may be appropriate. If you can plan for the larger voltage, a specific location for the toaster can be advantageous. Typically, but not always, the higher voltage unit may produce up to 25 percent more slices of toast because of the higher wattage heating elements associated with the higher voltage. If you go with the 120V model, be sure the outlet is a dedicated circuit. If on the same circuit with other outlets, the high amperage of the toaster may overload the circuit.

Vertical or Horizontal? There are two types of conveyor toasters, the vertical model that traditionally toasts by having the product in direct contact with a heated plate, and the horizontal conveyor that toasts without direct contact. Typically, conveyors are used in higher production applications, and many can alternate between toasting buns or bread. There are also some specially made units for bagel toasting.

Typically, the degree of doneness on conveyors is determined by the speed of the conveyor, which is infinitely adjustable. Some can be set for either front or rear delivery, meaning that one employee can load the unit while another uses the toasted product to make a finished sandwich. A few conveyor toasters are gas fired rather than electric heated, allowing for what may be a more economical energy source. Keep in mind, though, that even a gas-fired toaster needs an electrical connection to operate the conveyor.

If you plan on toasting a mix of products such as English muffins, bread, rolls and frozen waffles, a conveyor toaster may be the best bet. The cost of conveyor toasters generally starts at approximately $900 to $1,000 and increases quickly, but if flexibility and capacity are needed, conveyor toasting may be the proper choice. If more than the basic conveyor unit is needed, some of the features you can expect include more precise heat control. Some have separate controls for the top and bottom elements that can be good for toasting different products. Another feature in some units is a "cool touch" exterior. Also, some of the conveyor toasters introduce a fan in the unit to distribute heat more evenly and toast quicker. These units are similar to convection ovens in producing fast results.

The Pop-Down Toaster. There are two other types of specialty toasters you may want to consider. One manufacturer takes an interesting spin on the popup toaster—the pop-down toaster. The pop-down toaster uses a less complex mechanism to drop toast onto a receiving tray under the unit rather than the conventional mechanism on a popup model used to raise the toast. The pop-down feature means that time is not lost removing toast from the slots before reloading, and toast does not sit in the toaster drying out if not removed immediately.

Contact Bun Toasters. If speed is of the essence in your operation, a contact bun toaster may be what you need. These toast-ers are the fastest made but are very expensive. They can toast a bun in 10 seconds. This speed is beyond the need of most operations and so is the cost.

If you treat your toaster well it should serve you a long time. Toasters generally should be kept in dry locations and not be in areas that get sprayed down for cleaning. Toasters with electronic controls are especially prone to damage from water. Also, like any piece of equipment, toast-ers need periodic maintenance. Oiling motors in conveyor models will help extend the life as will keeping the heating elements free of built-up debris. Even with good preventive maintenance, expect that parts such as heating elements and lifting mechanisms will need to be replaced every two to four years. As with most any equipment, if you treat it well it will treat you well for a long time.