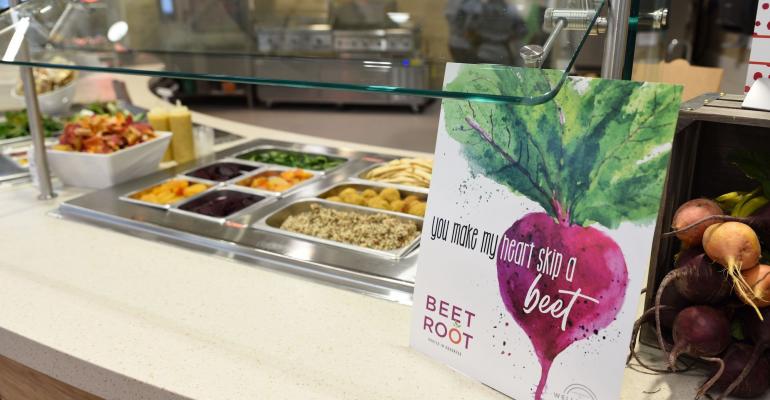 Morrison Healthcare has been recognized with the 2020 Best Concept Award in the Best Menu Concept category for Beet Root, which leverages the nutritional advantages of the root vegetable in the concept name to give client locations in the healthcare market a brand that is not only distinctive and unusual but appealing from both flavor and a health perspectives.

Beet Root has its…er, roots…in a previous Best Concept winning initiative from Morrison, its plug-and-play micro-concept program designed to turn traditional cafeteria spaces into food halls by rotating a series of quality menu brands through a servery to provide variety and menu excitement. Over the past two years the company, a unit of Compass Group North America, had developed 15 popular food-hall-trend-based rotating brands through this program that were launched on a bi-monthly basis throughout its more than 800 accounts across the country.

“As the demand for and trend toward plant-based proteins continued to advance through commercial restaurants to fast casual dining we paused and thought could we put the ‘plant’ back in plant based,” explains Jeffrey Quasha, CEC, CCA, ACE, corporate executive R&D chef for Morrison, who developed and rolled out Beet Root in conjunction with Kevin Dorr, Morrison’s vice president of retail solutions. “Could we takeover an entire station in our cafes with just an on-trend plant-based pop up that was packed with flavor, easy to execute, features IDP Produce and uses 100% of the vegetable—that is, ‘root to stem’—so there is no waste? The answer was an astounding yes!” 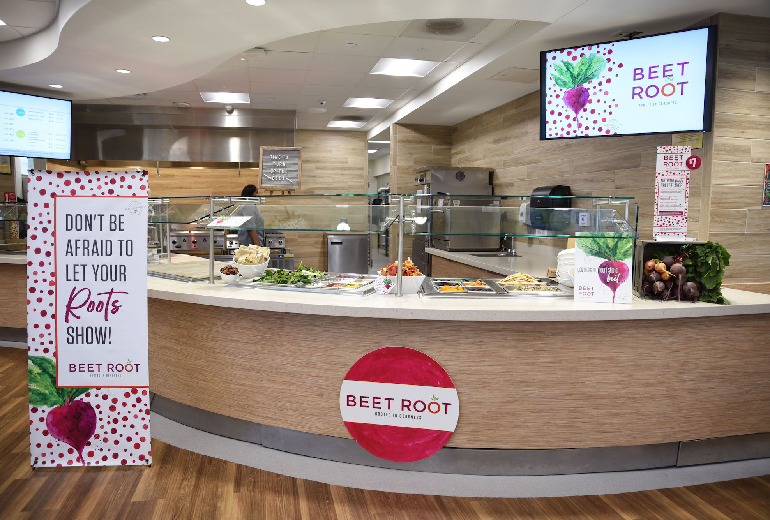 Quasha and the Morrison retail R&D team actually ended up creating six vegetable brands that featured vegetables ranging from not just beets but other nutritious veggies such as carrots and cauliflower. Beet Root launched in November of 2019 at Roper Saint Francis Hospital in Summerville, S.C. and then went live in over 850 accounts across the United States. Beet Root and the other vegetable brands will also be anchoring a new Food Hall concept that launched earlier this year at the Mayo Clinic and is headlining veg-forward stations throughout the Kaiser System on the West Coast.

Beet Root from inception to adoption had an R&D cost of $4,000, with marketing costs around $2000 and in-unit kit costs of $150. Morrison also produced training videos for the concept on how to roast and peel beets and an in-unit time lapse video on how to stage and set the stations.

Quasha reports receiving a call early in Beet Root’s rollout from a Morrison associate who said that he had peeled beets for eight straight hours trying to keep up with the demand of the Beet Root Station, a personal testimonial that supports statistical data showing rotating brands such as Beet Root produce on average a 34% increase in day part sales over the previous year data.

“Still, we didn’t initially design Beet Root or any of the vegetable brands with the intention that they would be huge profit boosters,” Quasha stresses. “We felt that we needed to demonstrate the power of the plant by delivery an amazing product that was not only nutritional, but environmentally and socially responsible. To us that was right thing to do not only for our staff but also for customers and clients.” 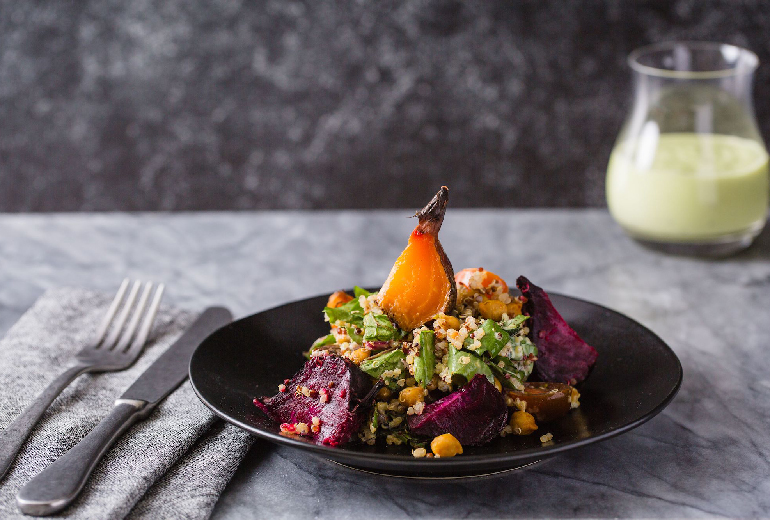 Roasted beet and grain salad using the beet greens as a base, one of the dishes served at Morrison’s Beet Root station concept.

Beet Root was also supported with a social media campaign on Instagram using the #eatitupmhc hashtag that allowed the retail marketing team to receive instant feedback from the field to judge the accuracy and success of the program.

“Powered by WellPower [Morrison’s wellness and sustainability platform], we’ve developed a root to stem concept that helps take advantage of all the goodness beets have to offer,” Quasha says. “The stalks, leaves, stems and skins provide distinct textures and tastes to each recipe.”

The recipes were designed initially to target the vegetarian, flexitarian, paleo, cross fitter, whole sum and veggie loving crowd, Quasha says. “We wanted to tear down the stereotype of a typical restaurant veggie plate that included whatever vegetables the chef featured that day plus mashed potatoes. Taking a huge step out of box and putting the plant back in plant based is not only the right thing to do nutritionally but also for the environment,” he adds. The risk of creating and launching an all-vegetable, no protein food hall style concept that is root to stem is truly news and noteworthy and just right. Not to mention, we’re doing our part to help reduce food waste by utilizing every part of the produce. There’s a reason for everyone to hop on the beet bus!”