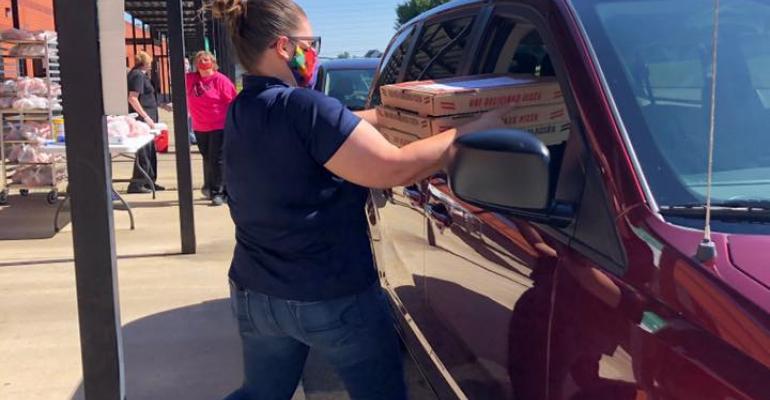 Houston County Schools
Pizza Pick Up Night, held over three different dates, not only allowed the district to turn a $30,000 loss into a $125,000 revenue gain but built community relations and promoted the quality of the school meal program.
Onsite leaders>FM Best Concepts

Best Concepts: Pizza Pick Up program made the best of an emergency situation for school nutrition program

The Houston County School System developed and rolled out a pizza pick-up initiative when the coronavirus pandemic hit last spring that not only made use of stock on hand but also benefitted and encouraged students, families and the community.

Reacting to a crisis by finding a different way to carry on with the mission is admirable but reacting by turning the situation into a major positive is something else altogether. And that was what the nutrition services team for the Houston County Schools in Georgia did when it turned hundreds of unused cases of pizza left in storage when COVID forced the district to shut down into a community-building initiative that also saved the department tens of thousands of dollars. It is for those reasons that Food Management named the Houston County Schools’ Pizza Pick Up Night program recipient of the 2020 Best Concept Award in the Best Special Event category.

When the Houston County Nutrition Services team left for the day on Friday, March 13, 2020, they had no idea that the district would shut its doors that weekend for the rest of the school year. That decision was made by the district on Sunday the 15th, and the department’s leadership team came to the office on Monday to finalize plans to reorganize service beginning the very next day, March 17th.

Related: Best Concepts: Chartwells’ Mood Boost teaches the connection between how students feel and what they eat

After several weeks of operating under the Seamless Summer Option for COVID-19 by making use of several USDA waivers, they sat down to address several other issues that had arisen, namely that of the inventory that was housed in the schools. Items such as whole pizzas had been ready for regular service in March but were no longer practical for current serving conditions.

It wasn’t a minor matter, 411 cases of pizza sat in the district warehouse and another 324 cases at individual school sites, in total representing a sunk cost of nearly $30,000 and a waste of more than 35,000 meals. How to get rid of it? Well, how about a drive-thru pizza night, it was suggested. 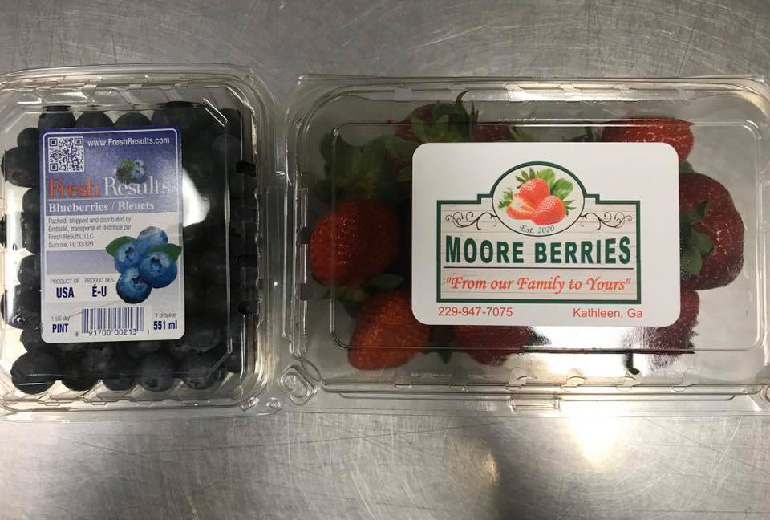 “While initially dismissed, it became obvious that we should give [the pizza] to the community,” recalls district dietitian Lauren Koff. “Families needed this. Waivers were in place to make this possible. And so it came together all at once. We decided on four distribution locations and pizza shuttled to these hubs. We figured out how much food we needed to count eight reimbursable meals per pizza and make it convenient for our families.”

To build out the planned pizza meals, the team reached out to its dairy distributor to get half gallons of milk, to its produce distributor to secure bulk bags of carrots and to local farms, three of which ended up supplying strawberries, blueberries and peaches, developing a mutually beneficial relationship with the district in the process for the future.

“We had help bringing in pizza boxes to package a 16-inch pizza using a smiley sticker to attach cooking instructions and food safety guidelines to freshly folded boxes,” Koff adds.

To promote the initiative, the Houston County Schools community relations department put out a press release, the nutrition services department posted on Facebook and “the word spread like wildfire,” Koff says. “A local newspaper picked up the story and a TV channel came to include us on the evening news.”

Houston County has a population of less than 160,000 people while its school district enrolls about 30,000 students, yet within 24 hours, the initial Facebook post reached nearly 50,000 people and was shared almost 700 times.

Pizza Pick Up Nights ended up being held on three separate occasions, each serving more pizzas than the time before and clearing out the inventory, in the process turning a possible $30,000 loss into nearly $125,000 in revenue.

“The outpouring of support has been phenomenal,” Koff says. “Families shared photos of their kids with their meals spread out in front of them, commented about all for the wonderful fresh fruit and one even said the pizza tasted great on the grill. This was a big help to families during this time and we are simply happy to help.”

In addition to saving the department budget a big financial hit and serving families while building-community relations, Pizza Pick Up Night also sent a positive message about the quality of the district’s school meal program, Koff notes.

“We let our customers know that the pizza they raved about was the exact same thing we serve in the schools,” she says. “If pizza is on the menu, this is what you get. We are glad you liked it! Hopefully these families see the benefit of our program and the quality of our products and we will have earned more customers once school is back in session.”