Earlier this year, University of California Davis Health (UCDH) was featured by FM as an Innovator of the Month for its success in supplying so much of its food ingredient needs from local sources. That ongoing initiative has now also earned the healthcare facility’s dining program a 2022 FM Best Concept Award in the Best Sustainability Concept category.
Onsite leaders>FM Best Concepts

The local procurement program at University of California Davis Health has been named winner of the 2022 FM Best Concept Award in the Best Sustainability Concept category.

Earlier this year, University of California Davis Health (UCDH) was featured by FM as an Innovator of the Month for its success in supplying so much of its food ingredient needs from local sources. That ongoing initiative has now also earned the healthcare facility’s dining program a 2022 FM Best Concept Award in the Best Sustainability Concept category. (For a photo tour of the program, go here.)

UCDH sits in an enviable geographic location, almost within touching distance of Northern California’s bounteous agricultural regions. That advantage has been increasingly leveraged by the man who oversees dining at the healthcare facility.

Executive Chef Santana Diaz joined UCDH in 2017 with a mandate to bring a more “farm-to-fork” emphasis to the program and was well into implementation when COVID hit. However, rather than an obstacle, the pandemic has actually helped illustrate some of the advantages of local procurement and working with smaller providers, as they have proved more reliable and resilient than some national vendors.

That’s in addition to the advantages local product has in terms of freshness and quality, something that has allowed Diaz to overhaul both retail and patient menus to emphasize more scratch preparation using high quality ingredients. 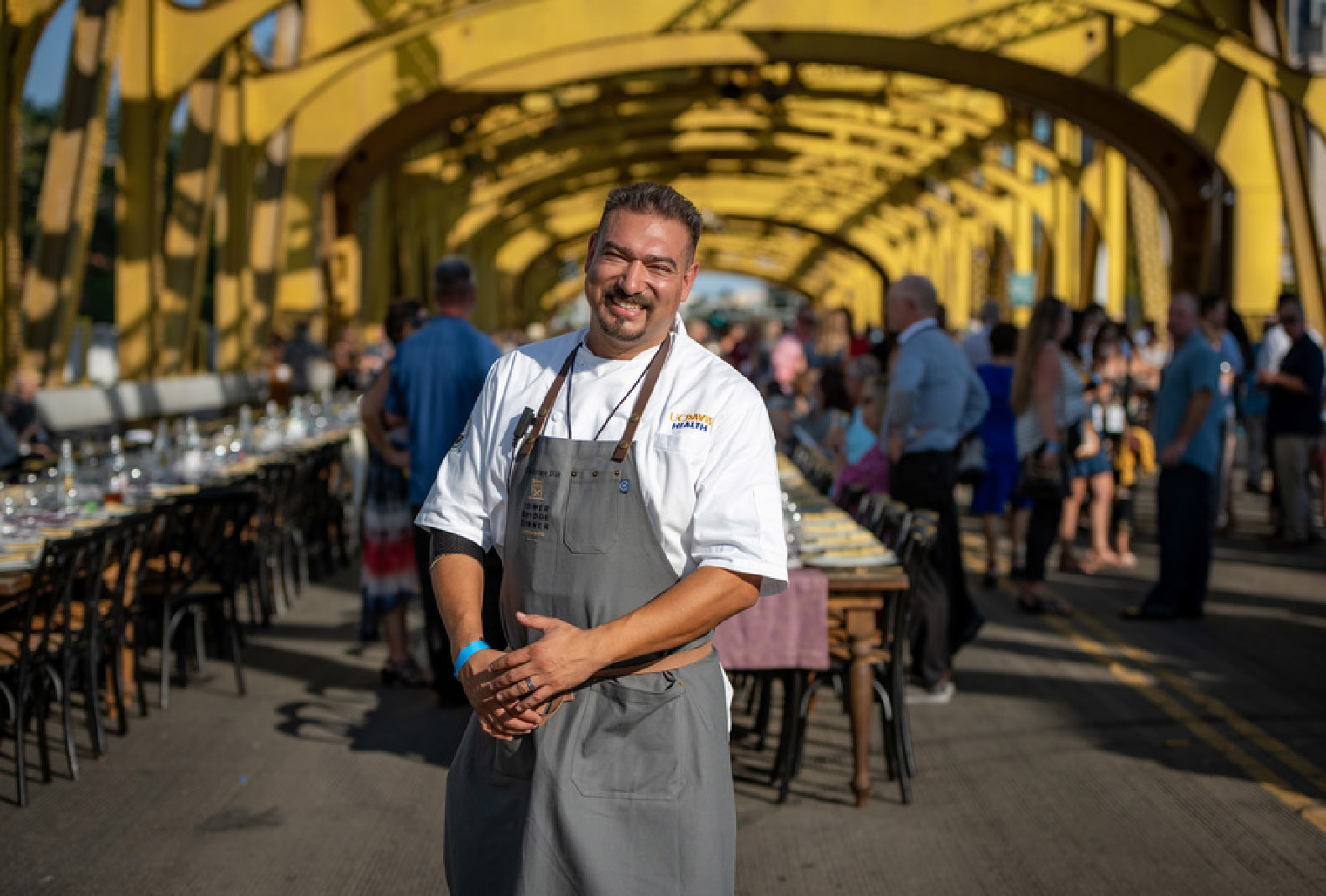 Chef Santana Diaz took over the dining program at UC Davis Health in 2017 and has since been building a model of how a major healthcare facility can operate with significant levels of local product sourcing and seasonal menus based on what’s available from those local sources.

It’s not a small endeavor as the dining program serves about 6,500 meals a day in total.

Currently, UCDH gets up to 80% of its produce needs from local sources, contingent on seasonal (quarterly) menu adjustments to take advantage of what is fresh at different times of the year. A company called Produce Express aggregates products from hundreds of farmers in the state for the UCDH dining program, and also supplies some needful products not grown in California, such as bananas, that have been ethically grown and sourced.

“This way, if we are going to bring in bananas [from out of state], at least we know they are Fair Trade and/or organic whenever possible,” Diaz says

Beef served at UCDH is 100% organic and grass-fed, bought from local suppliers that source from several dozen California ranchers, while chicken is from a nearby Foster Farms operation and lamb from Superior Farms in Dixon, just a few miles away. Almost all of it is fresh, which also helps conserve water that would otherwise have to be used to force-thaw frozen product if space in walk-in coolers isn’t available. 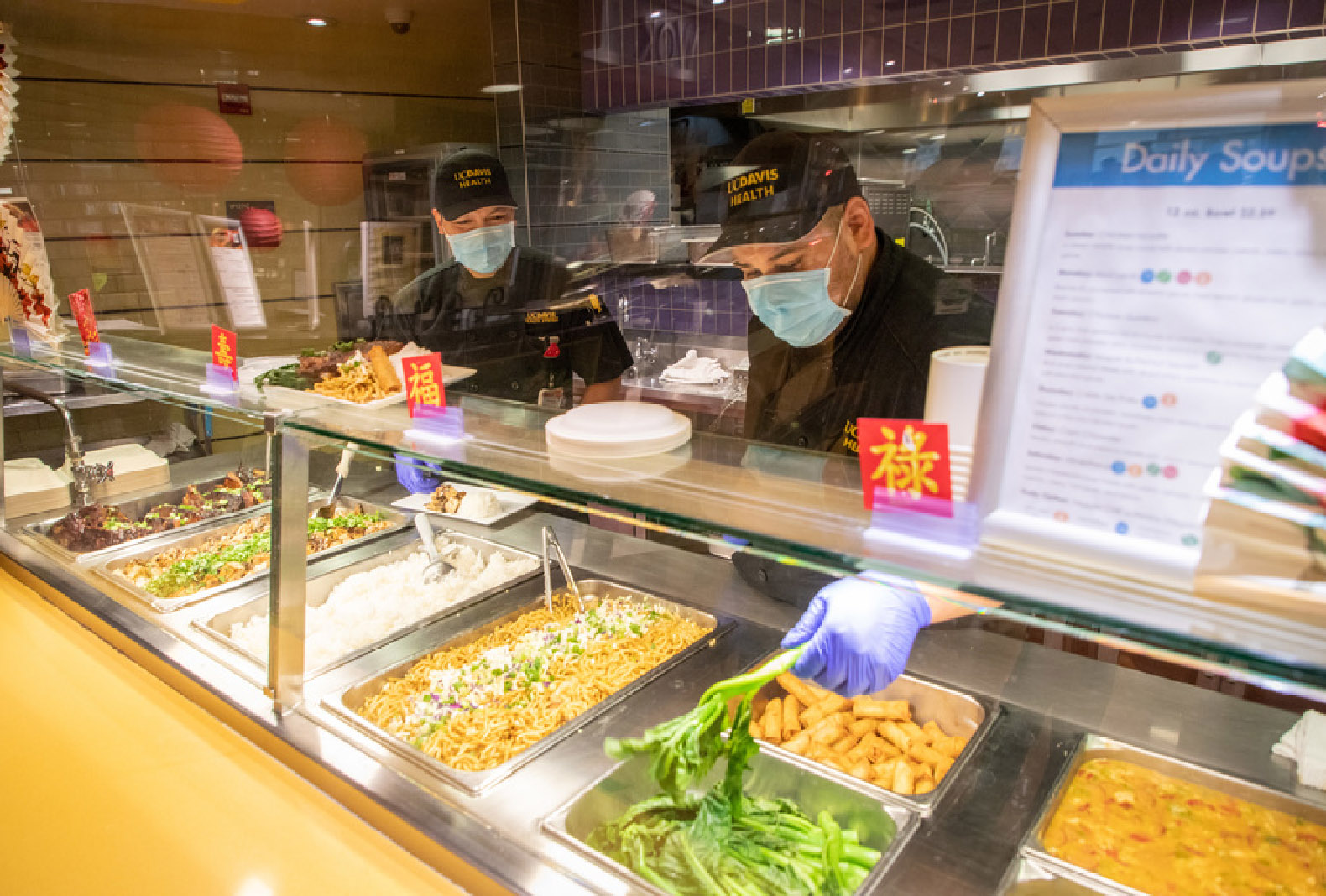 The dining program at UC Davis Health has seen an overhaul in the past four-plus year in procurement approach and menu compositions to emphasize local products and scratch prep.

“That’s thousands and thousands of gallons of water just poured down the drain,” Diaz notes, “so we are mindful not just of food waste but water waste and overproduction waste.”

Managing waste isn’t easy given the unpredictability of what some 13,000 onsite employees may choose to buy on any given day from the various meal choices, and Diaz doesn’t want to disappoint anyone by running out of popular choices. One solution is to repurpose unused ingredients into other dishes for the following day, which is facilitated with staff-serve as opposed to waste-prone self-serve models.

Retail is operated out of three locations, and, with visitor restrictions now lifted, the program is getting back to pre-COVID numbers, Diaz notes, meaning about 4,000 transactions on average a day among the three outlets. That includes sales to overnight staff, as the Pavilion Café, the largest outlet, is open 21 hours a day, closing only between 1 a.m. and 4 a.m..

External customers are also adding business, as the food & nutrition services program has branched out to supply the food program for WellSpace Health, an interim care/outpatient facility located about two miles away, which represents an extra 160 meals for each meal period.

“We’ve been transitioning away from traditional ‘cafeterias’ to what are more like cafes, given the shift in the quality of food we’re trying to provide in our spaces,” Diaz explains about his retail dining approach. Wok and grill stations remain, but the salad bar is probably not coming back as it tends to generate a lot of waste, which is something he is determined to reduce, for both environmental and fiscal reasons. 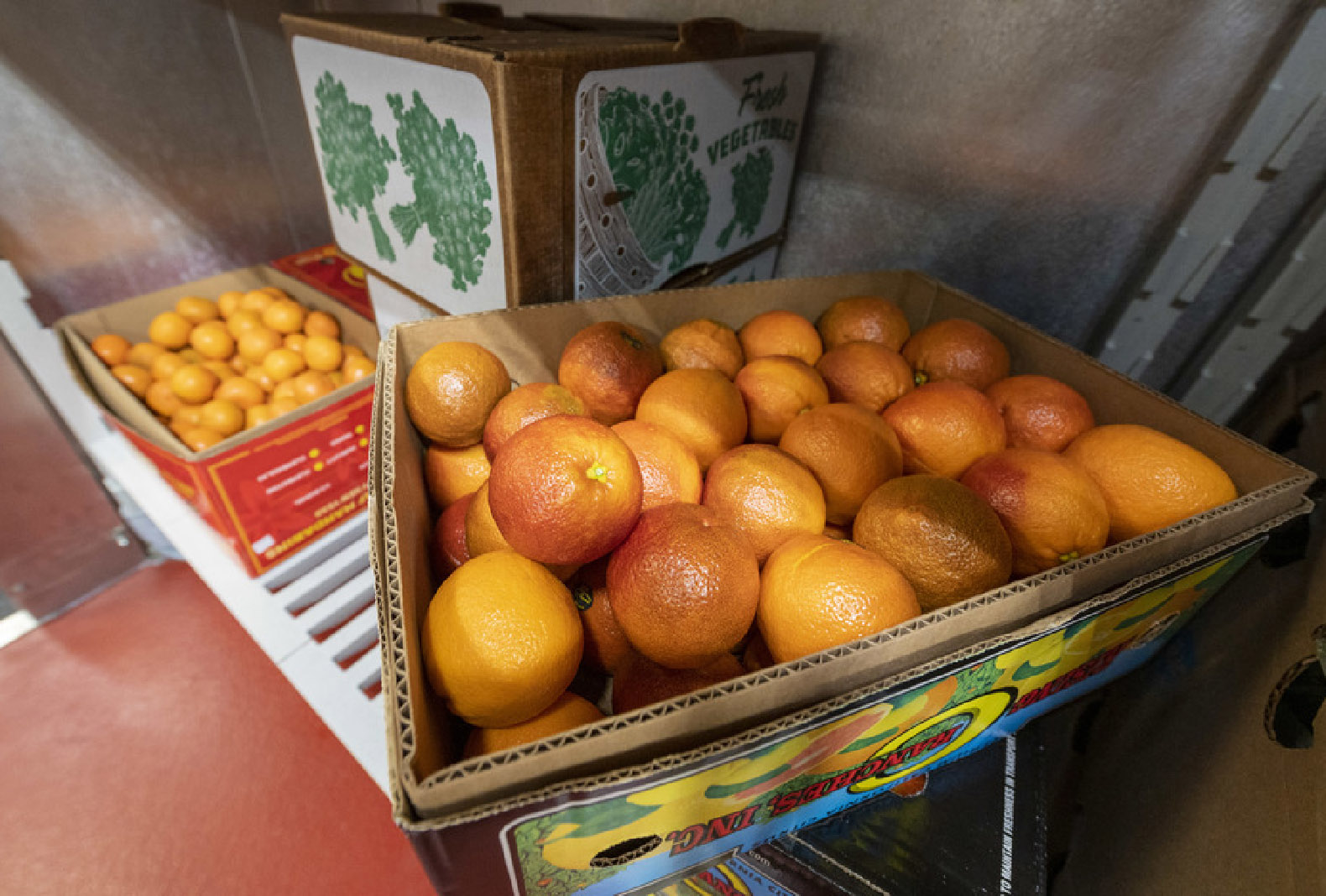 Produce from hundreds of individual farms is aggregated for UC Davis Health by distributor Produce Express.

“I’d rather be donating it than just throwing it away, but you can’t donate something that’s been sitting out for hours,” he says, “so we’re looking at a realignment of our food structure here.”

That realignment involves more staff composition of dishes as opposed to self-serve, with plenty of options that change daily. By keeping components behind the line, and thus “pre-consumer,” leftovers remain eligible for donation or repurposing rather than trashing. Meanwhile, staff doing most dish assembly controls cross-contamination and promotes quality. Food donations are made to local shelters through the COPIA program that works with DoorDash to transport the food.

Daily menus are based on themes such as Mediterranean or Indian, with a growing emphasis on plant-based alternatives. For instance, an Indian themed menu may feature a traditional tikka masala chicken but also a garbanzo bean and kale curry that is whole food plant based. 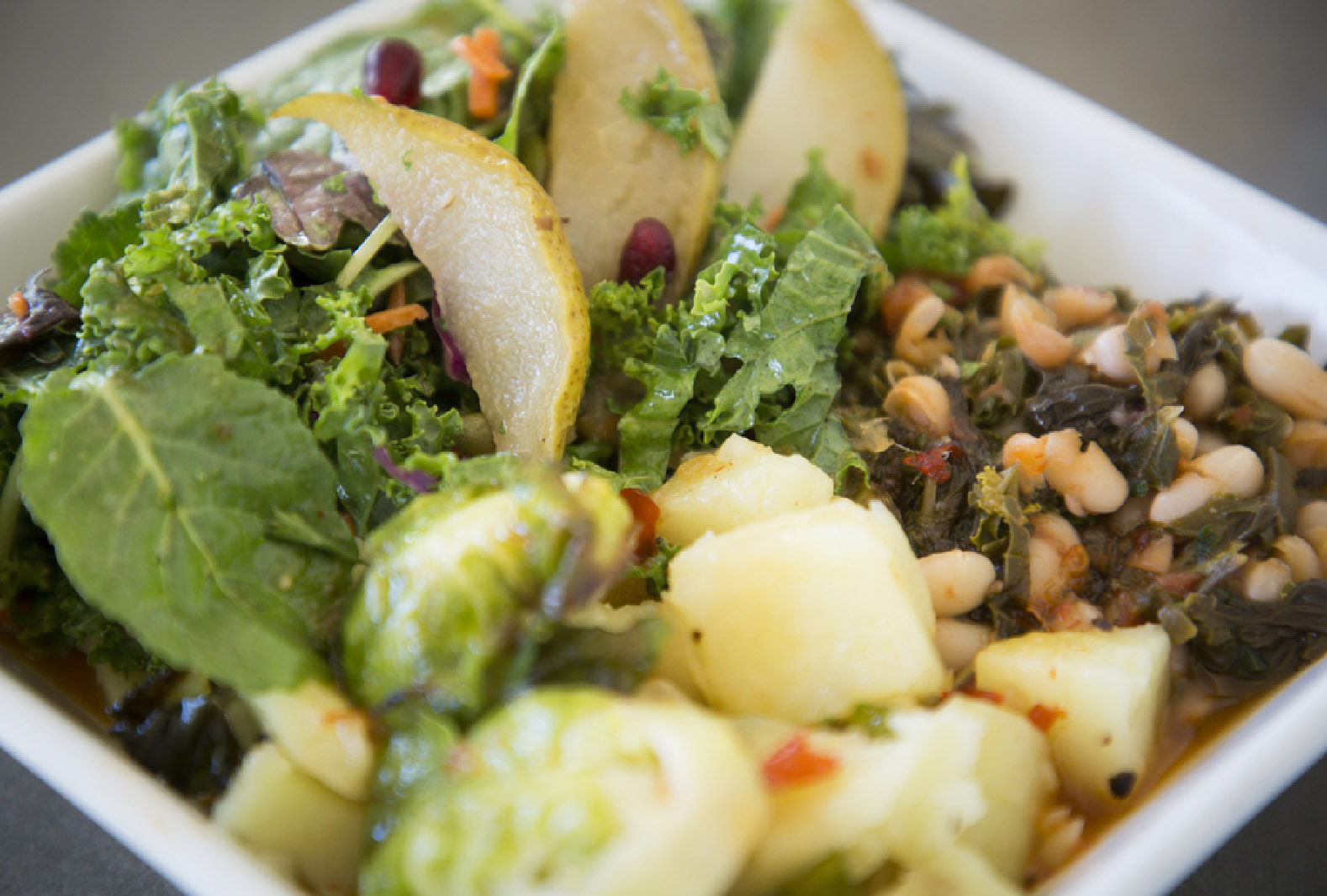 The menu not only prioritizes local product but is increasingly whole food plant based in accordance with the latest findings on the benefits of plant-based diets on individual health.

Patient dining for the 646-bed medical center means producing 1,700-1,800 meals a day, not counting tube feeding and other alternate nutrition services. Currently, the program operates on a traditional model, but plans call for the introduction of an on-demand room service approach with dedicated floor attendants who would get to know the patients on their floors and assist with ordering where needed.

To facilitate local product sourcing, Diaz says he tries to establish personal relationships with as many ranchers and farmers as he can, believing that “boots on the ground” personal observation of operations is preferably to simply taking the word of company representatives about a particular entity’s operations and practices.

“One of the reasons I like going on these [trips to farms and facilities] is to just to connect and see what they’re doing with the programs, and it helps me answer questions if someone asks me about the products we’re serving,” he explains. “This way, I can say with 100% certainty that it is what we say it is.”

Communications is also much easier with smaller suppliers, who can provide more timely and reliable information about what’s available and what may not be, letting Diaz and his team more accurately plan menus. Currently, he is dealing with the drought situation in California that his suppliers are already telling him will probably impact summer crops, especially water-intensive ones like melons, so planning for summer menus has to account for that.

“I’m still planning on things like summer squashes, but when it comes to fruit, it will get interesting,” Diaz observes.

Down the line, the foodservice program looks to grow with new outlets as UCDH is planning an expansion that is expected to eventually double its size. For instance, a new bed tower is slated to include a new bistro, while the massive Aggie Square project, which involves the university as well as the medical center, may include a large catering facility and community outreach program.

A lot of this is still in the planning stage, Diaz cautions, “but if all this moves forward, we would be looking to potentially double the size of our food & nutrition services footprint.”

The prospect of dealing with such volume hardly intimidates someone whose resumé includes serving as lead chef for Super Bowl 50 at Levi’s Stadium and as executive chef at Sacramento’s Golden 1 Center arena, where his success in developing local partnerships led to his being asked by UCDH administrators to take over the medical center’s dining operations.

It was a challenge Diaz couldn’t resist though he had no previous experience with healthcare foodservice, having worked in restaurants and clubs before his stops in the high-end sports/entertainment world. Now, four-plus years later, he is forging a model for how a major healthcare facility can operate its foodservice with an emphasis on local and seasonal product, benefiting not just dining customers but the community, where UCDH is an anchor institution that can also model the benefits of a healthy diet to staff, visitors and patients.

“Where else are you going to receive the best quality food?” Diaz asks. “At your local fast food place? Probably not. As for fine dining restaurants, they do a phenomenal job, but they’re not always looking at what’s the healthiest thing to serve. Look, I love butter and cream, though I don’t serve them as much as I used to. I’m classically French trained as a chef and culinarian, but if no one else is teaching you the right way to eat, shouldn’t you at the very least receive that level of care and quality of food in a hospital healthcare setting, when you need it the most?”