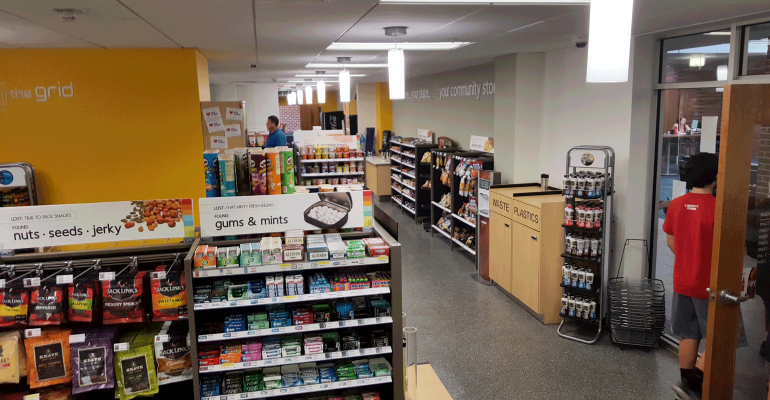 C-store supports the school’s community service mission by donating 1 percent of each sale to a charity chosen by the customer.

Opened simultaneously with five other restaurant concepts inside Liberty University’s new Montview Student Union, The Grid is a unique campus c-store in the way it supports the school’s community service mission not only through the donation of one percent of retail sales to local charities, but also by going one step further and giving each customer the choice of how the donation from his/her purchase will be used.

This not only involves each customer in the process of giving but also allows him partial ownership of the program. This sense of sharing is further bolstered by the community bulletin board in the store that provides an opportunity for customers and visitors to get the word out about local events, fundraisers and opportunities to participate in charitable giving.

The Grid’s centralized location on the Liberty campus also gives it a unique opportunity to serve customers from all campus demographics, making it an excellent place to showcase and test new products and ideas, from housemade gluten-free bakery items and healthy grab-and-go meals to innovative hot packaged meals and healthy recipe soups that customers can weigh in on by their purchasing choices.

The Grid’s central location also makes it ideal for external vendors to showcase their new and innovative products. Major suppliers like Coca-Cola and Frito Lay have already taken advantage of the space at the Grid to showcase promotions and new products prior to full local rollout.

Montview, on Liberty’s Academic Quad at the center of its campus, is connected to the main academic building, DeMoss Hall, on its first floor, which is where the Grid and the five other food concepts are located, along with a game room, computer labs and an eight-lane bowling alley. The dining concepts include the Mediterranean-themed Garbanzo, Woodfire Pizza, U Food Grille and its health-focused menu, Star Ginger Asian Grill/Noodle Bar and Argo Tea.

The concept mix is designed to meet the needs of customers who are challenged for time and need a meal or a simple snack in a hurry before returning to DeMoss. Returns from its first year of operation show that it has certainly gained considerable popularity, with as many as 175 customers an hour jamming its two-register operation at peak periods, with ticket averages exceeding $4.80.

In fact, in just its first six months, Montview’s foodservice array had already generated enough revenue to cover 80 percent of its $400,000 annual sales target, well on the way to some $750,000 in total sales for the year.

The new retail cluster with The Grid c-store is just one of a number of enhancements made recently to the dining program at Liberty. The school also rolled out a campus pizza delivery program last fall and earlier this year it expanded the reach of its gluten-free bakeshop to campus retail venues.

The school was also the first site to roll out Sodexo’s Simple Servings allergen-free dining station concept, which avoids any use of seven of the most common eight food allergens. The concept won an FM Best Concept Award in 2013.