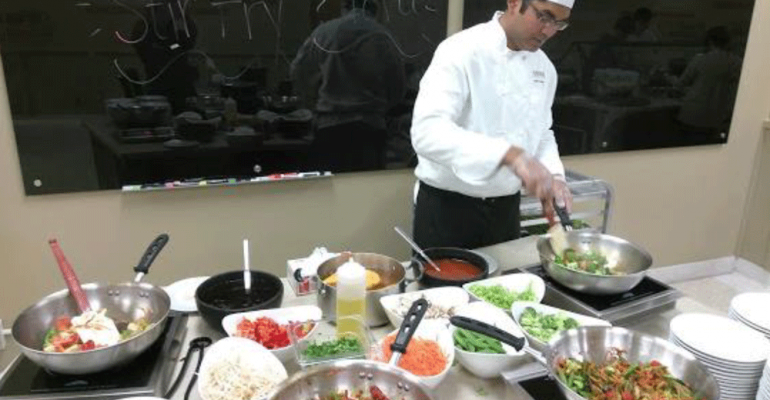 Repurposed dining rooms are now pop-up buffet-style restaurants in the evening where groups and individual meal plan holders can reserve space and avoid the lines and crowds at the regular dining halls.

How do you accommodate campus groups who wish to take meals together and reduce lines during the evening dinner crush?

At Purdue, the solution the dining team came up with was to repurpose two dining rooms off a location that had minimal use as a catering space and turn them into pop-up buffet-style restaurants at which groups could make reservations and to which individual diners could walk in as long as they didn’t exceed the capped attendance count of 220. The venues take meal swipes between 5 p.m. and 7 p.m. Monday through Thursday during the school year.

That means Faculty Fellows could plan to meet their students for a meal, staff could schedule meetings, learning communities could meet and students could participate in planned diversity and cultural activities, secure in the knowledge that they will be accommodated without fighting lines or jostling for tables.

The spaces, called the Gathering Place and 1North, were an immediate hit, capturing 8,482 meals in the fall 2016 semester, as board students were attracted to the no waiting in line, an upscale menu, fun activities and cultural and diverse meals and programming.

The spaces include a large-screen TV and feature menus that give students a distinct dining experience available only to meal plan holders. The menu changes weekly and includes a chef-attended action station.

Each week featured a different theme and its own menu. For example, Taste of India, which was the theme for the week of Sept. 12, included fare such as carrot-gajar salad, chicken biryani and a Bombay Bowl Indian curry bar at the action station. A couple of weeks later, Oktoberfest (the week of Oct. 3) had a menu with fare such as pickled beets, German potato and cucumber salads, potato soup, beer-steeped brats and peppers, braised red cabbage, spaetzli, potato pancakes and, on the action station, carved apple-glazed pork loin with wild rice and apple stuffing.

To initially publicize the concept, student brand ambassadors were hired to promote meals and events through social media and to communicate alternative meal options personally to the customers. They wore bright yellow “7 Extra Ways to Use Your Meal Swipe” T-shirts and also had “Ask Me How!” printed on them. Outdoor A-frame signs are put out each afternoon in rotating locations and posters in each dining court feature the menu of the week.

In addition, to engage the resident assistants, housing staff, Faculty Fellows and dining staff, complimentary meals were scheduled in the two weeks before the start of the fall semester so culinary staff could showcase their menus and programming opportunities could be explained.

The Gathering Place/1North concept is one of Purdue’s “7 Extra Ways to Use Your Meal Swipe” campaign, which was designed to lessen the load on the five dining courts in the face of an increase of 750 meal plans in fall 2016. Other components of 7 Ways included adding a meal swipe option in the evening to several campus retail outlets—including the food truck—the addition of takeout options at designated dining court locations and expanding dinner serving hours at the dining courts.