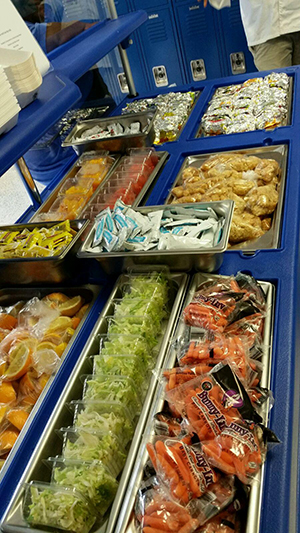 A set of three kiosk stations scattered around the building and a new c-store that supplement the existing cafeteria have enabled Hilton Head (S.C.) High School to avoid lunchtime participation losses after the school consolidated its staggered 25-minute lunch periods into a single 50-minute period that is designated as an “independent learning period” for all of the school’s 1,300 students.

In fact, the program has boosted reimbursable lunch sales to around 82 percent from the less than 75 percent it had been running previous to the program’s launch. In addition, a la carte sales have exploded, more than tripling to around $590 a day.

The longer period and the more conveniently distributed meal service points have not only alleviated pressure on the cafeteria but also helped make the time more productive for students, who can now confidently look forward to getting their food quickly before getting together on peer projects, studying and speaking with teachers. The single period also allows lunch to be scheduled for the middle of the day instead of scattered from mid-morning to mid-afternoon.

The kiosks and the opening of the c-store to serving lunch were solutions developed by Sodexo, which operates school meal service for the Beaufort County School District, of which Hilton Head High is a part, after the district announced its intention to change the lunch period schedule. As an added touch, each kiosk serves a different menu, making them mini destination restaurants. One offers hot sandwiches and the second cold deli-style sandwiches, while the third, which is a branded Street Eats concept (a branded Sodexo concept), has been rotating menus.

An initial foray into serving pizza off the carts was abandoned because “it was too popular” and overwhelmed capacities and caused operational inefficiencies, says Roberta Edwards, Sodexo’s general manager for onsite service solutions at Beaufort Schools.

“At first we wanted to go with our top sellers on the carts,” she explains. “The hot sandwich and deli carts both did very well. With Street Eats, we experimented to get the right mix, putting different menus out there each quarter.” The options tried over the course of the year at the Street Eats cart included chicken tenders, tacos and barbecue. Edwards says the rotating choices will continue this fall.

One extension of the cart program that definitely has been successful is deploying one at the high school’s front entrance in the morning to boost breakfast sales. “That was an idea that came from our student advisory committee,” Edwards says.

The school cafeteria also remains an option during lunch with pizza, salad bar and entrée stations as well as an a la carte smoothie station. Meanwhile, the c-store also has a la carte as well as reimbursable meal choices.