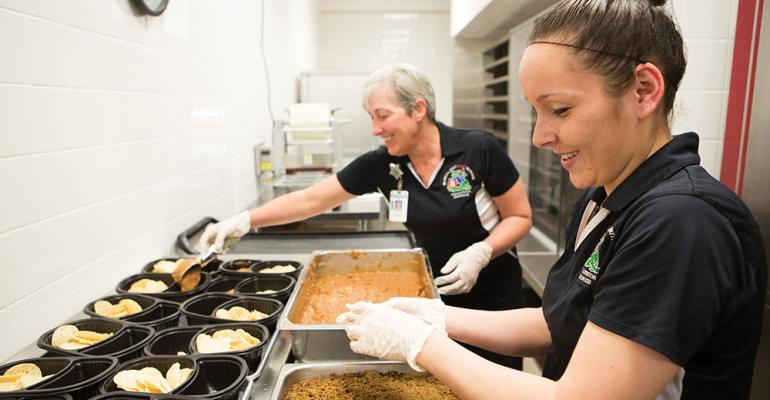 <p>Kitchen staff mass assemble the meal containers. Long-term kitchen labor requirements have remained steady, with meals per labor hour inching up from 20 to 22 between 2014 and 2015.</p>
Onsite leaders>FM Best Concepts

At Dickinson High School in the Dickinson Independent School District in Texas, the school’s 2,700 students all have a single lunch period in which they swarm the cafeteria from three directions every school day beginning at 10:40 a.m. This sounds like an operational nightmare and surefire participation killer, but, thanks to the SMART Lunch program, it isn’t. In fact, in the first six months since SMART Lunch was implemented in tandem with a single, hour-long lunch period, lunch participation has jumped 5 percent and the number of meals served (as opposed to a la carte) went up 13 percent.

With SMART Lunch, students can choose their prepackaged meal, plus sides, beverage and packaged condiments from 18 self-serve merchandising units, then pay (typically by punching in their six-digit code) at one of a dozen cashier stations. The whole process takes under five minutes. After that, they are free (with some restrictions) to disperse around the school to eat, attend scheduled tutoring sessions or club meetings or even do homework.

Meals are prepared beforehand in the production kitchen, then placed in USDA-approved polystyrene or polypropylene (depending on food temperature) trays and sealed with an air- and watertight, tamper-evident Mylar film. The individual trays are then placed in the appropriate merchandising units, which are heated or cooled depending on the type of meal being held. Large flat-screen monitors above each of the merchandisers display the menu item beneath.

The daily menu includes a choice of 18 entrees ranging from hummus, turkey wraps, fresh fruit and nut salad and yogurt to hot wings, burgers and roasted chicken. The hot food is packaged hot and remains that way in the merchandising unit, while packaged salads and other cold foods that have a longer shelf life are kept cold and held for sale during the week. The price of a full meal is $2 for cash students.
The concept was prompted by Dickinson High Principal Dr. Billye Smith’s determination to replace before- and after-school tutorials with more convenient lunchtime sessions in teachers’ classrooms. As traditional meal service and cafeteria design could not accommodate such a change, Lee and her team embarked on a rethinking of the entire production and service model, a process that eventually yielded the SMART Lunch concept.

The challenges they had to meet included a short implementation window, adherence to USDA regulations, fitting within budget constraints and meeting staffing requirements without adding labor hours, and that’s in addition to keeping participation up in the face of the new hour-long lunch period (which typically erodes participation), maintaining food quality and freshness and significantly boosting service and checkout times.

The project team (see sidebar for names and affiliations) only had from January to August 2014 to do its research, devise a complete foodservice and dining hall architectural plan, design, prototype and manufacture the merchandising units, build additional seating areas, select and test packaging, install new equipment, train staff and test and implement the new system.

The result: The challenge was met on all fronts.

As noted, lunch participation went up about 5 percent in the first half year of the SMART Lunch experiment, with an average of 1,683 meals served per day, as opposed to 1,600 in the same period the previous year. That translated to 11,373 more reimbursable meals sold.

District officials had worried that the transition to an hour-long lunch period might erode participation as it had in high schools in nearby districts where longer lunch periods had been implemented and which saw declines of 200 to 250 meals a day as a result. A similar result at Dickinson High would mean the loss of up to $142,000 a year in federal reimbursements (56 percent of the school’s students qualify for free or reduced price meals), plus an estimated additional loss of around $45,000 in a la carte sales as students are discouraged from making purchases by the cafeteria crowding.

If there were any worries about delays due to the volume, those have been allayed as most students can get in and out of the servery area within five minutes.

Labor costs have been controlled as the kitchen’s 19-member staff arrives at 5 a.m. each morning to cook and assemble the meals and load them in the merchandising units. They finish with production before service begins and most then move out to operate the cashier stations. Afterwards, cleanup is minimal, as dishwashing requirements have been reduced. Generally, once service is complete, employees finish and are off the clock in less than 30 minutes.

Meals produced per labor hour have inched up from 20 to 22 in the first six months, and a day’s meal is currently produced with 101 staff hours. In all, the new system saves half the labor compared with the previous traditional serving line system.
The department ended its first semester with SMART Lunch posting a program surplus of $18,000, which means that the project’s $1,698,374 cost would be paid down in approximately nine years if district enrollment growth projections are accurate and participation remains steady.

The packaged meals also eliminate questions about meeting federal meal requirements for reimbursement eligibility as each package satisfies the guidelines. That means no sending students back to get a component needed to fulfill the requirements.

Perhaps best of all, the students have embraced the concept and the convenience and flexibility it provides. So do teachers, coaches and band directors, who can schedule more activities previously confined to before or after school hours to lunchtime with confidence that students will have time to participate.