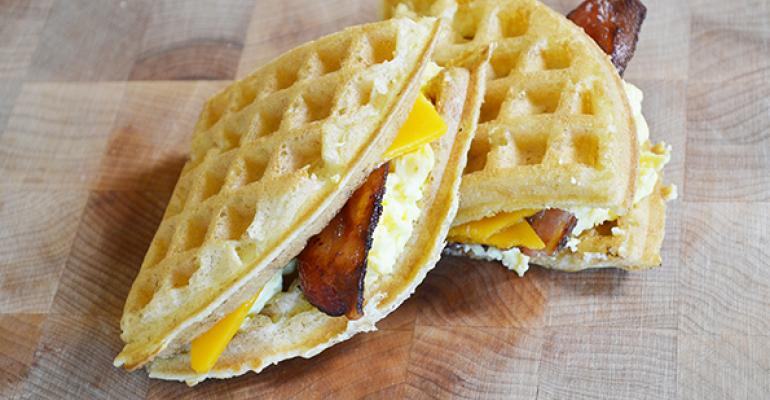 <p>Griddle Me This features a fresh-baked waffle toped with eggs, cheddar cheese and, in this pictured version, applewood bacon.</p>
Onsite leaders>FM Best Concepts

While quirky and innovative menu concepts are hardly unknown in food trucks, Ironsides Waffles presents a distinctive approach that is based not only on a somewhat unusual base ingredient—waffles—that is familiar to and popular with college students, but also one flexible enough to accommodate a wide range of menu choices from sweet to savory, with plenty of room for specials.

Though gaining in popularity across the rest of the country, food trucks are fairly new to the culturally rich dining scene in New Orleans and the concept of a "waffle" truck was altogether brand new to the scene, says Kari Solberg, catering & concessions manager for Sodexo at Tulane.

“What we offer in terms of sweet and savory waffle sandwiches is creative, innovative and thoughtful,” she explains. “Our Sidekick is a nod to the traditional chicken and waffles dish, while the Fowl Play, which contains duck debris, locally produced berry preserves, bacon and arugula, is a forward-thinking but Louisiana-style creation. It is the combination of our fun and creative menu, coupled with our involvement in social media and catering to the changing needs of our students that we are able to function as a dynamic concept on the Tulane campus.”

The concept was developed in-house by the dining team at Tulane University.
“We purchased a used bread truck and commissioned a company to strip it down and rebuild [it] with the equipment package to support the needs of the brand,” Solberg says. The truck is retrofitted with an oven, four-range gas burner, fryer, flattop, chargrill, steam table, make table and cooler, and it meets all city health and fire codes.

The overall cost to build the truck was $58,000, which included the truck itself, all internal kitchen equipment and the branding/wrapping.

“Financially, it cost less than a remodel of another brick-and-mortar location on campus,” Solberg observes. “Ironsides has served several needs on campus and has been very well received by our students, from our presence at the tailgate area for football season to pop-up appearances on campus when we have concerts and speakers, and our daily rotation on both uptown and downtown campuses.”

The truck debuted on campus the first week of September 2014 and the following February it also began serving the school’s downtown New Orleans campus. In addition, it makes appearances at off-campus events and caters private parties and has an active presence on social media sites like Twitter, Instagram and Facebook.

“We saw a need to not only service areas away from the center of campus, but to offer our students more variety and another dining choice,” Solberg says. “Mobility allows us to be where the students are, which adds an element of convenience as well as enhanced variety.”

Another added convenience is that students are allowed to take advantage of using their declining balance cards (WaveBucks) as a method of payment, thanks to wireless card readers on board the truck.

“We look at success in two areas,” Solberg says. “First, financially, Ironsides has delivered enough to support itself and break even, which is a tremendous success in year one. Second, the most important payoff has been satisfaction of the Tulane community, staff, faculty and students. As such, our effectiveness is measured through guest satisfaction and our own ability to ensure that those with few food options near them on campus now have yet another fantastic dining choice to serve them.”