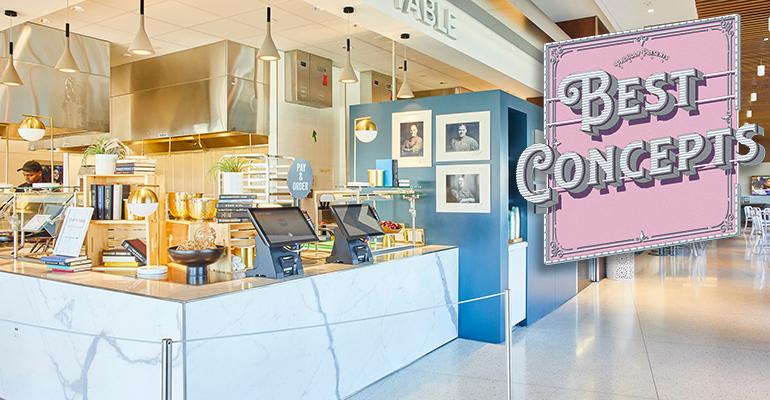 Best New Facility: The Café at Capital One headquarters/Restaurant Associates

A brand-new second café at this corporate complex is highlighted by a flexible outdoor venue that is a combination breakfast/smoothie/grill/ice cream/coffee/adult beverage bar depending on the time of day.

Located in McLean, Va., near Washington, DC, the headquarters complex of financial firm Capital One certainly stands out physically as its new 470-foot-tall office tower is the second tallest structure in the Washington Metro area, after the Washington Monument.

But what also makes the new Capital One headquarters tower prominent, at least for the company’s employees who work there and for those who appreciate excellence in onsite dining programs, is the new café that opened last summer in the building. Managed by Restaurant Associates (RA), it is the second café on the campus and is referred to as M2 internally to distinguish it from the existing M1 café. For a photo tour of the venue, go here.

M2 brims with amenities ranging from nine stations featuring a variety of cuisines and kiosk-based ordering and self-checkout technology at every station to a series of special Dining With a Chef meals at a marble community table behind the Chef's Table station. There’s also the Terrace Bar, which serves as a smoothie/juice bar during breakfast, turns into a deli during lunch and then becomes a regular bar for the late afternoon where associates can relax and socialize. 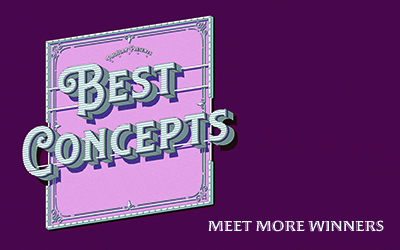 Designed by the RTKL architect firm and completed last July as an amenity for the new expansion of the Capital One headquarters, the new, market-style café features stations like Hearth and its customizable Mediterranean bowl dishes with skillet-roasted proteins, StrEATs with street food from around the world and Spice Market, which features spice-centric cuisines like Indian and Cambodian. The total seating capacity is 665.

When deciding on the culinary options for the café, RA carefully selected cuisine concepts that would enhance the overall campus dining experience, balancing out the stations already existing at the cafe in the adjacent building.

“Both cafes are fairly easy to access [for campus employees] but they do have distinctive brands,” says Nicole Hansen, RA’s regional director for the Tysons Capital One campus, “so anything you’ll find at M2 you won’t find at M1 with the exception of breakfast.”

The new cafe's menu, overseen by Executive Chef Bill Downes, who has more than 20 years of experience in restaurants and hotels, emphasizes RA’s commitment to fresh, seasonal and reasonable ingredient sourcing and scratch cooking. 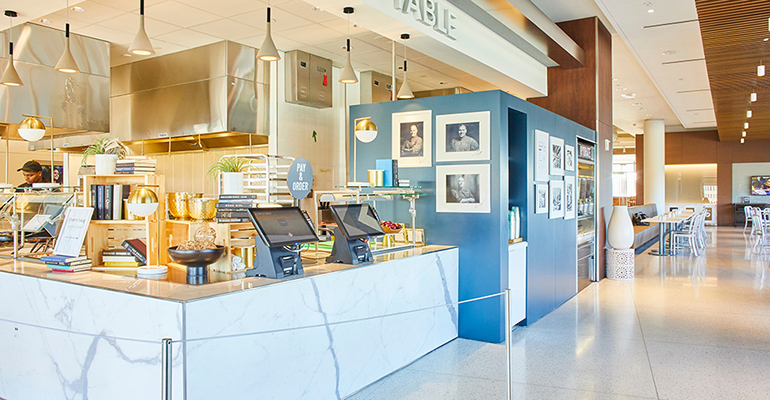 Lunch covers on the campus increased 70% in the last quarter of fiscal year 2018. While much of that can be attributed to a 65% increase in campus population, there’s no doubt the new options have also increased the attraction of the onsite dining option for all employees.

Capital One felt that having more than one café, especially if it offers different menus, would encourage more “casual collision” encounters between employees, Hansen suggests. 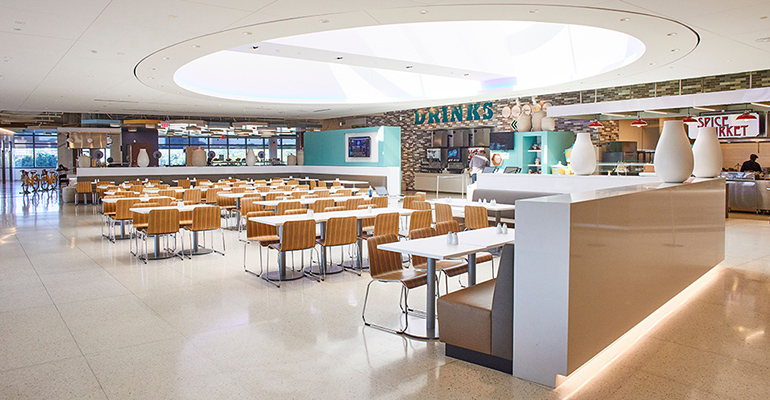 “It’s encouraging people to cross-pollinate between the two [office] towers because they didn’t want the towers to become silos” with little interaction, she explains.

The new tower also encouraged a 117% jump in year-over-year catering sales thanks primarily to a new conference center located just below the café, Hansen observes, “which was more than we anticipated from just the increase in conference space.”

Terrace Café adapts easily to its different daypart roles, going from serving breakfast items like avocado toast, breakfast bowls, smoothies and fresh, specialty juices such as Orange Zing (made with orange, carrot and lemon juice and ginger) in the morning and composed sandwiches at lunch, to transforming into an ice cream parlor in the afternoon and bar service complete with four beer taps and refrigeration capability later on. If weather permits, it can be opened up to an outdoor terrace that overlooks the rest of the campus.

Not surprisingly, “it is our most utilized real estate space,” Hansen says. 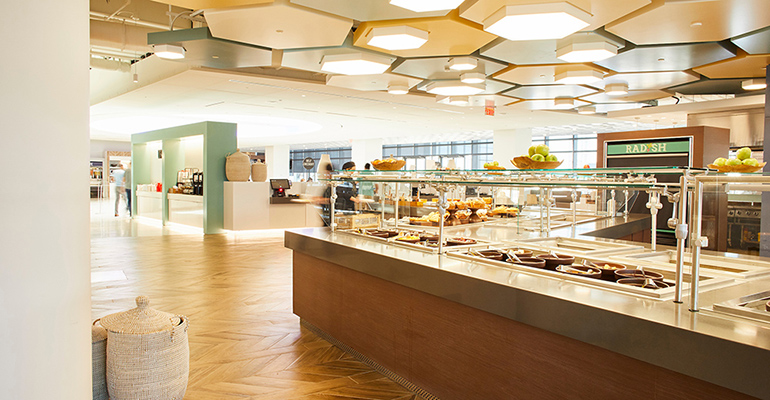 Chef’s Table hosts one of the more popular special events, a monthly Dining With a Chef meal that offers 20 guests an exclusive fine dining experience with either a staff or guest chef who discusses a topic of choice with the guests, from culinary inspiration, heritage and personal cooking stories to kitchen tips and tricks. Some of the topics have included the Persian New Year Nowruz and a Native American heritage celebration featuring a guest chef from the RA operation at the Smithsonian’s National Museum of the American Indian. 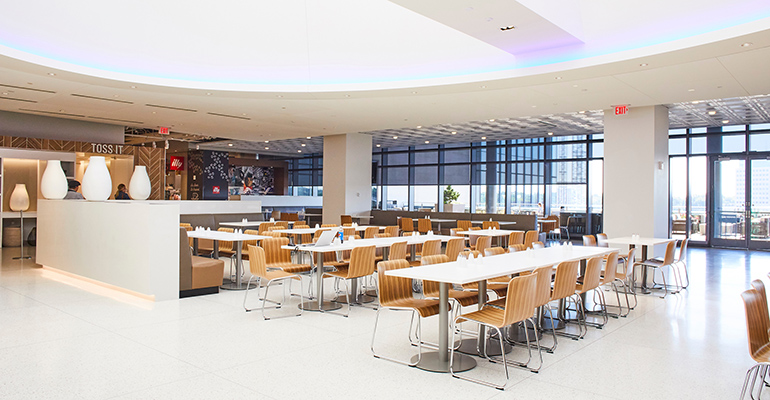 Other special events include a monthly dessert series at the Terrace Bar that has a rotating theme with whimsical titles like Sin-Amon Bun, Cookie D’oh and MYO Sundae, and monthly happy hours, also at Terrace Bar, with themes like Oktoberfest, Halloween, Champagne Pairing and Tap Takeover.

Also adding some variety and excitement is a weekly pop-up station that can appear around campus with a single cuisine focus.

“It’s typically something we don’t do at a station but something fun we want to [offer],” Hansen says.

Not only are the cuisine concepts in the café distinct, but each station also is designed differently from a visual and styles perspective to align with its culinary focus. For example, StrEATs uses bicycles as stanchions to go with its "street food" theme, Spice Market is decorated with a variety of spice jars to align with its theme and the exhibition cooking-centered Chef’s Table has framed photos of the staff chefs as well as behind-the-scenes kitchen photos adorning the walls.