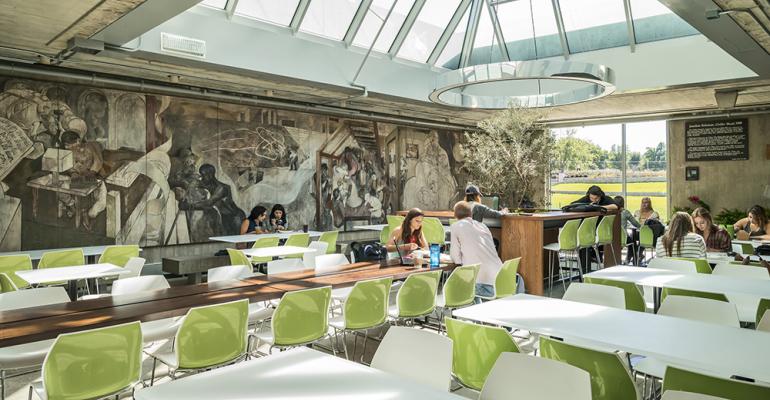 GALLERY: Best Renovation Concept: The Blue Wall at the University of Massachusetts-Amherst &gt;&gt;

A staple of campus life since the early 1970s, the Blue Wall is located in the Lincoln D. Murray Campus Center, the highest trafficked area of the University of Massachusetts-Amherst campus (originally a campus pub, it became focused on food after the drinking age was raised to 21 in Massachusetts in 1985). In preparation for the renovation, UMass Dining surveyed students to find out what was important to them when it came to food. The results showed a definite preference for healthier, local, more sustainable options.

“Students want to know where their food comes from, and they want to know how it’s prepared,” says UMass Dining Executive Director Ken Toong. “At the newly renovated Blue Wall, we show students exactly that.”

One of the signature features of the renovated venue is the presence of a key front-of-the-house item as a visual attraction at each station, either a signature piece of equipment or an appealing method of preparation.

“At Blue Wall, when customers of all ages come in they experience a fast-paced market environment,” says David Eichstaedt, director of UMass Retail Dining. “When they order a burrito, for example, they see a staff member making a fresh flour tortilla right in front of them on a showpiece tortilla oven, while another staff member is preparing beans on a four-burner range and grilling the steak on a charbroiler. When customers walk by the bakery, they see staff making everything from bread to pies. Customers love this. They are ordering food and being entertained.”

The move to renovate the Blue Wall was prompted by plans for UMass’ new Integrated Learning Center (ILC), which will be located next to the Murray Campus Center and would mean a significantly increased traffic flow—to some 2,300 students an hour—at the already somewhat dated dining facility that had not seen renovations for more than 15 years. At the time Blue Wall had only six rather static dining concepts, lagging the evolution of dining on other parts of campus in facilities, equipment and, critically, function.

“The Blue Wall had reached a critical mass,” Toong says. “A major renovation was needed to not only keep up with the changing campus, but to forge ahead and create a next-generation dining experience for the contemporary customer.”

The $19 million, 9-month overhaul project, completed in September 2014, was a major undertaking that reconfigured the 36,300-square-foot space by merging two formerly separate dining venues into a single operation with 11 dining concepts modeled on such commercial operations as Wegmans, Whole Food Market and Eataly.

The resulting space presents a casual urban dining experience that blends traditional and new elements. There are 22 points of sale to handle heavy crowds and tables are subtly angled in busy areas to encourage one-direction traffic flow.