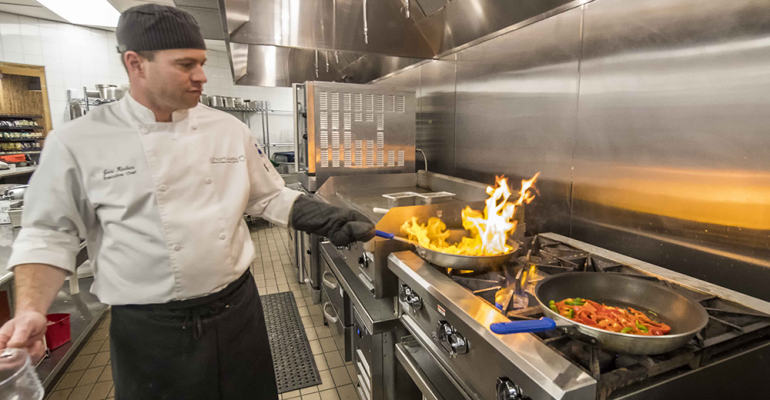 The New England Institute of Technology overhauled and expanded its existing student center/dining hall into a comprehensive communal space to accommodate a new residential student population and build community with the existing commuter student population.

More than a standard facility renovation, the New England Institute of Technology (NEIT) Student Center is a complete transformation of an outdated and inadequate structure that had already outlived its usefulness even for its original purpose—it was designed only to accommodate commuter students—into one that meets the needs of today’s NEIT for a campus communal dining/activity center. (For a visual tour of the facility, go here.)

“The need for this project was driven by the school’s new residential student program,” explains Marissa Lisec, project manager for Connor Architecture, the firm that contracted with NEIT on the Student Center renovation project. “The existing student center could not accommodate the increase in student population, and its existing design was also a reflection of its former purpose as a pharmaceutical office building.” 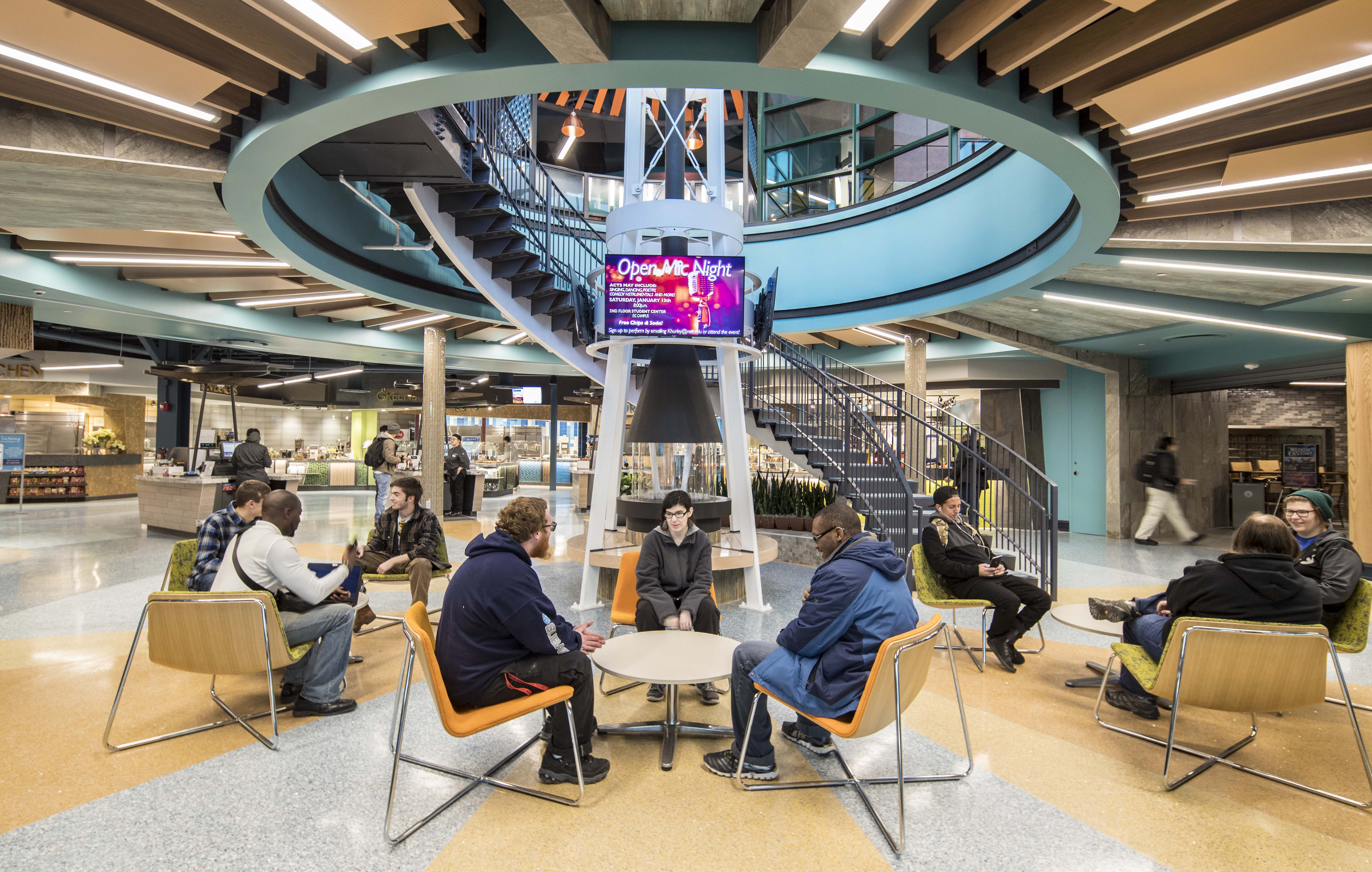 The renovated NEIT Student Center is now a campus hub for both commuters and the new residential student population.

Discussions for a radical upgrade to the facility began in May 2015 with a goal of not only creating a new dining program but also a student-focused social hub on campus.

“The goals were simply to expand the student life, provide more collaborative opportunities and provide a dynamic and attractive dining space for the growing campus,” Lisec says. “We created an interactive and engaging retail dining multistation platform where faculty, staff and students can come shop through a marketplace of choices.”

The construction itself was undertaken in two phases, with the first commencing in June 2016. Completed last September, it involved building a new student center and dining hall while maintaining the existing servery and dining space during construction. Phase II launched when the first phase was completed, and it involved renovating the existing space and transforming it into a new café/market place.

The results of all the effort and transformation are increased sales and participation in both the dining program and the surrounding student activities, Lisec says.

“The students needed a fresh, exciting space to meet, eat and socialize. By adding the unique dining seating zones, gaming, performing and office programmatic elements to the design, all these goals are met in one facility. The concept of having one space for both the commuting students and residential students was developed in order to create a more communicative and social environment.”

A big design focus, she adds, was to have spaces for commuter students to study and relax, and also to have an engaging gathering space for everyone on campus. 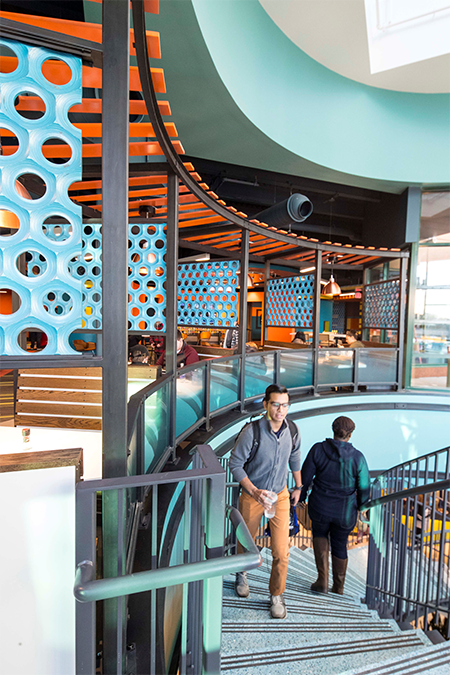 The multilevel Student Center incorporates both dining and social activity areas such as game rooms and performance spaces.

Both participation and sales have increased more than 70 percent since the inclusion of both residential and commuter students last fall, which swelled total enrollment at NEIT to 3,000, while customer satisfaction with the facility has risen to 95 percent overall.

“Since opening, not only has dining received more attention, the new student center lounge, hub space, sports bar and gaming spaces have all been heavily utilized, therefore creating a greater connection and increased productivity in student life,” Lisec reports.

Marketed as part of the overall campus expansion for residential life, the student center has become the heart of NEIT’s East Greenwich campus not only due to its location and services—it also houses student life and student services offices in addition to the dining facilities—but also because of the new collaborative atmosphere it creates for all the new residential and commuter students.

Each program within the building has its own design that relates not only to the school itself, but the character of the surrounding New England environment.

For example, upon entering the building, visitors are presented with a central communication tower from which the dining servery and seating radiate. The circular tower is surrounded by a fireplace lounge and includes a spiral staircase that wraps up to the student lounge on the second floor.

The servery itself is designed to evoke a seaside New England town and includes an exhibition kitchen, pizza/pasta station, deli/bakery, soup/salad bar, grill, breakfast station, cafe and market store. Dining is operated on the campus by Chartwells.

“The goal of the project was to give the school a cutting-edge design from a foodservice standpoint but also give the customer an experience of walking around a rocky New England seaside shore,” Lisec observes. “We emulated the shapes and forms of a cliff in the ceiling that surrounds all the stations, in addition using materials and textures on the stations and surrounding areas that would be found throughout New England.”

To carry the design story throughout the space, including the surrounding seating areas, the ocean floor was mimicked in the flooring pattern while the overhead structures were made to resemble boardwalks that break up the ceiling plane and create more intimate spaces for the sea of seating.

The need for a community space was met by having a mix of seating types and carving out a sports pub area that features stadium seating, gaming areas, ceiling mounted TVs and plenty of places to plug in to use a laptop, tablet or smartphone.

The second-floor student program area is meant to reflect an abstract version of circuit boards and gaming components, which ties back to the school’s focus on developing technology in the learning atmosphere. The space has as its central focus a stage for performances and karaoke or for students to gather and watch a sporting event. Radiating off the stage area are gaming pods where students can get together with friends and play video games.

On the flanking walls of the stage are areas for pool, ping pong, air hockey and foosball, which are separated by bright, colorful millwork screens and overheads, all designed to foster connections between residents and commuters.

The existing space renovated in Phase II of the project involved incorporating the same rocky shore motif continued throughout the seating spaces, with the boardwalk overheads over the booths and a mix of lounge and dining seating to give multiple options for those using the space. This space also houses the new and expanded student activities suite.