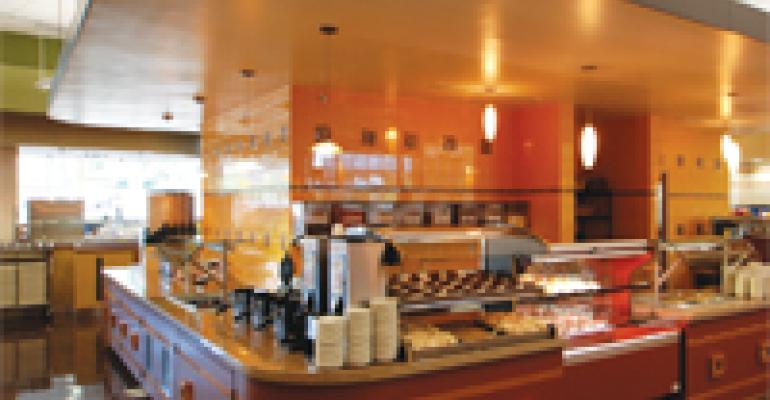 Consistently Ahead of the Innovation Curve

BYU's campus dining operation has been an industry leader for a long time. Under the leadership of Dining Services Director Dean Wright, it has literally re-created and elevated the scope, character and capabilities of dining programs on the campus over the last decade, a legacy that will last for years and which has provided a model for many other schools in the segment.

Among other ground-breaking innovations, BYU had been at the forefront of campus convenience retailing trends, especially with its pioneering Creamery on Ninth, generally recognized as the country's first real campus grocery store. Many of its retail operations, like the recently opened Blue Line Café in its new business center, have also set a standard for others to follow.

Last year, BYU opened its landmark Commons at Cannon Center dining complex, a five station multi-concept platform designed to reduce pressure on retail outlets and motivate students who aren't required to purchase meal plans to do so. It also represents a leap forward in the department's commitment to sustainability with its emphasis on local sourcing (including from the university's own dairy and beef herds), energy efficiency, composting and recycling.

And the innovations aren't over. Currently, BYU Dining is moving ahead with plans to open a series of market deli concepts designed for restricted nontraditional locations on campus where they can intercept traffic and add incremental revenues. The concept, called Blue Line Market and Deli, will be made possible by a planned opening this fall of a new, centralized culinary production center that will bring efficiencies of scale to meal preparation while allowing the scattered outlets to expand their offerings.

That BYU dining has achieved all this is impressive enough. That it has achieved it on a campus where the student population is older than is typical at most schools, and where only about six percent of the students are required to have meal plans, makes the department's performance remarkable.