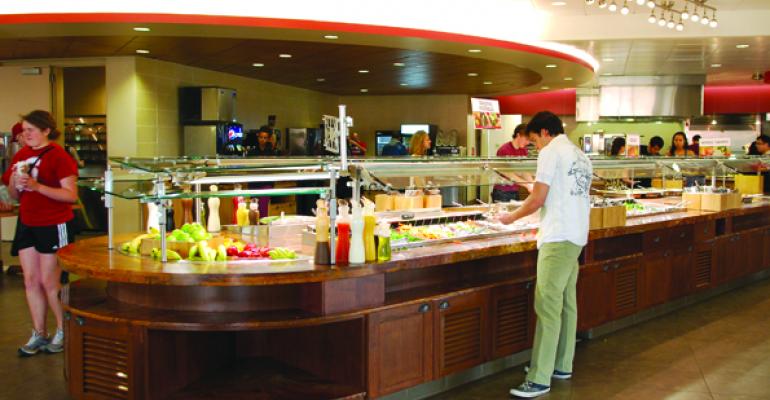 The dining environment at Stanford University traditionally consisted of dining halls in each residential facility. That certainly made them great community builders for the individual building populations. Unfortunately, it also worked as a significant force that tended to limit university-wide cohesion.

Enter Arrillaga Family Dining Commons, the first dining facility to be built on the Palo Alto campus in almost 20 years. It opened last September after seven years of development.

Was it worth the wait!

The 31,000-sq.ft., two-story building is designed to be far more than just a dining hall, even though it’s primary purpose is to serve as the home dining facility for students in two nearby residence halls. It is also about academic enrichment and providing a food- and wellness-focused student lifestyle center. 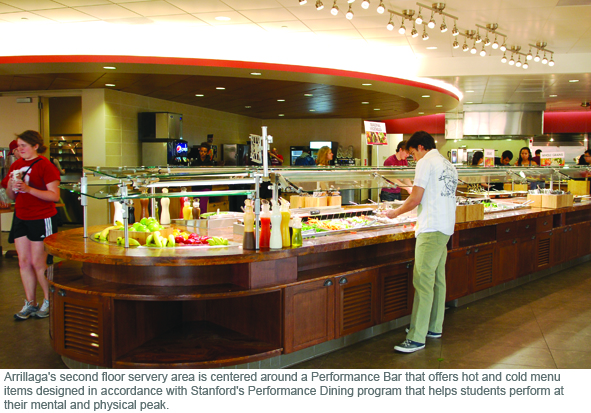 Cozy, soft seating on the first floor encourages staying and relaxing while large commmunity tables accommodate communal activities. A series of conference/study rooms (with state-of-the-art multimedia capabilities) facilitate collaboration. There are also options for those feeling non-communal, who have access to quiet, private places for study.

Flat-panel screens throughout the premises, meanwhile, broadcast news, sports and entertainment as well as demonstrations taking place in the culinary studio on the second floor. Those in the mood for skipping the video intermediary can look through the large viewing windows along a lobby wall into the onsite central kitchen, where real life meal production is efficiently under way both for the dining room upstairs and for other Stanford Hospitality & Auxiliaries operations (retail outlets, athletic concessions, catering, Stanford Guest House, other dining halls, etc.).

The central kitchen produces more than 12,000 meals a day using reallocated labor resources from across dining operations. Other campus dining halls are run by chefs de cuisine who develop about a third of each day’s menu for their specific populations, but their operations are streamlined by using the central facility for volume cooking and advance production with processes like cook-chill and sous vide.

Arrillaga also serves as a regional emergency center. The central kitchen can run for 72 hours on its own generator.

At Arrillaga itself, getting a meal is not a problem at any time of day since there is continuous service. While traditional meal times still account for most of its business, the mid-morning and mid-afternoon off-hours have been generating about 15% of its meal counts. 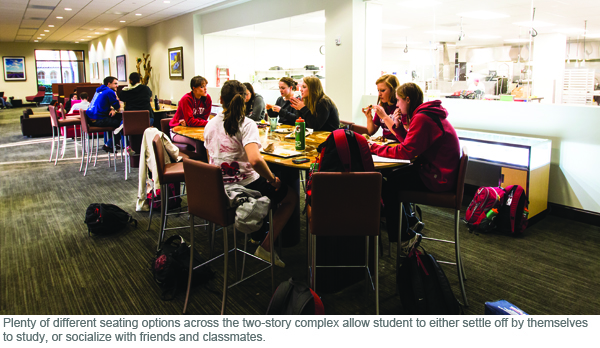 In the late evening, from 9 pm to 2 am, the dining hall opens its Dish at Arrillaga service, menuing both traditional favorites like pizza and wings as well as a Fit & Healthy menu. (To view of video of  Arrillaga, go to http://tinyurl.com/bpe2bzw.)

Performance Dining combines flavor and optimum nutrition to help students reach and perform at their mental and physical peaks. The program was launched in stages, with, for example, the “brain performance component” debuting around finals time to encourage participation.

The goal of Performance Dining is not just to provide healthful meals to students during their college years but to give them healthful lifestyle lessons they can use after they leave Stanford.

There is also a custom induction display cooking station with concepts that rotate each meal period. Next to it, a “Wall of Fire” station has a four-foot chargrill, a huge gas-fired deck oven for roasted meats and slow-cooked braised dishes and a custom-designed eight-spit rotisserie.

The success of the new facility can be seen in the numbers. Over a third of students on meal plans eat at Arrillaga daily, including an increasing number of graduate students, whose numbers patronizing Arrillaga climbed from 3,000 in its first month to 5,300 by March. Arrillaga has also boosted voluntary meal plan purchases by university staff, from less than 500 before its opening to over 1,200 by this past spring.

Originally slated to serve 500-600 transactions a day, Arrillaga has hit as many as 1,500 in a single meal period and about 3,000 a day. At the same time, Arrillaga has not displaced the existing residence-centered communal dining culture but complemented it. After an initial burst of curiosity about the spectacular new dining facility, counts have stabilized at a point where Arrillaga offers an alternative instead of a replacement for student socializing spaces.