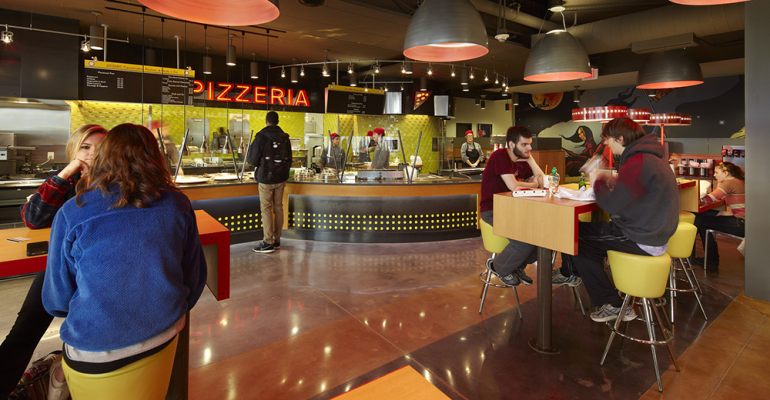 VT Dining
Atomic Pizzaria, in the Turner Place complex, typifies the look, feel and destination dining approach of dining at Virginia Tech as its pizzas are distinct from those of other campus pizza outlets, so each is a unique dining experience.
Onsite leaders>FM Best Concepts

One of the most innovative and successful college dining programs in the country, Virginia Tech (VT) uses a flex-based meal plan approach that gives users deep discounts of 50 to 67 percent on purchases at any campus dining outlet. These range from a traditional all-you-care-to-eat (AYCTE) residential dining hall—albeit one with an authentic Brazilian churrascaria station—to units of seven different high-profile national brands like Chick-fil-A and Jamba Juice and an array of in-house brands ranging from burger and pizza concepts and two food trucks to a Japanese steakhouse and a wood-fire char grill station.

For a photo tour of the program, go here.

The result has been a meal plan participation rate of nearly 19,000, which is double the number of students residing on campus (9,471)—and that figure that doesn’t even include another 7,000-plus students with Dining Dollar accounts only, which give them a 5 percent discount at campus dining centers. As only students living on campus are required to purchase meal plans, VT Dining obviously draws broad voluntary participation.

While that is perhaps the most compelling sign of broad satisfaction with campus dining services, there is also the program’s perennial presence at or near the top of various Best Campus Dining listings such as Princeton Review and niche.com, which depend on survey results from students who patronize campus dining outlets. VT is one of a very select few large public universities able to break into the top ranks of such listings on a consistent basis.

The flex-based meal plan approach VT uses is hardly unique but its effectiveness is magnified by the variety and quality of the dining choices made available to students, with one AYCTE dining hall, 44 retail outlets and two food trucks providing plenty of choices. The variety even extends to concepts that might at first glance seem to be similar as the program strives to create a “destination dining” environment on campus, says Ted Faulkner, director of dining services.

“That term ‘destination dining’ really contributes to the success of our program,” he explains. “Often, we’ll see programs duplicate food offerings across multiple locations. What we strive to do is give that restaurant experience so we may, for example, do pizza in four different places but [at each] it’s a different dough, a different sauce, a different cheese blend and a different cooking method to give that variety.”

The genesis of Virginia Tech’s success lies in its adoption in 1996 of the universal flex plan, which transitioned the meal plan from something only those who were forced to do so purchased—grudgingly—and which only entitled them to eat at the less-than-compelling AYCTE dining halls, to one that offered discounted dining at a wide range of campus retail venues, including national branded units like Chick-fil-A and Pizza Hut.

Those high-profile brands debuted on campus in 1997 and both immediately became among their chains’ top grossing units. That proved the viability of flex plans in an a la carte campus environment and led to further innovations like West End Market, based on Richard Mellman’s then-cutting-edge FoodLife-style marketplace café concept, in 1999; D2, an AYCTE dining hall on steroids that offered high-end international cuisine like the Brazilian churrascaria and European pastries, in 2004; and, most recently, Turner Place, a multilevel retail dining palace with a mix of national branded and self-branded concepts that has to been seen to be believed (see it here), in 2013.

Not content to rest on these accomplishments, VA Tech Dining is continuing to upgrade and revise its program. Last fall saw the complete demolitions and renovations of the JP’s Chop House and Fighting Gobbler’s Sports Bar stations in West End. Other recent changes and additions include a new grab-and-go outlet at West End, a dedicated gluten-free station in the D2 AYCTE facility, the debut of two state-of-the-art food trucks—Periodic Table and The Grillfield—and the addition of a new state-of-the art Diedrich Computerized Roaster to roast green coffee beans purchased directly onsite at the Deet’s Place campus coffee shop.

“JP’s high-volume dining center does over a million transactions a year, so there’s been quite a bit of wear and tear on the facility,” Faulkner explains about the decision to overhaul that already very successful venue. “We also felt it was getting a little dated and that we needed more capacity and efficiencies with it.”

Another major factor was the addition of a mobile ordering option last fall, “so we wanted to add capacity to handle production, pickup and flow of those incoming orders,” he adds.

As it turned out, JP’s, which menus high-end fare like steak and lobster on a daily basis, saw a major bump in sales in the past year, up 16 percent or over $300,000, following the renovation and implementation of mobile ordering.

Fighting Gobbler, meanwhile, added $160,000 in annual sales following its redesign, which included new tabletops, each with a piece of “Hokie stone” embedded in it. The limestone, mined in nearby quarries, gives the school’s buildings their distinctive look.

JP’s and Fighting Gobbler were two of the prime beneficiaries of the new mobile order option, outpaced only the Jamba Juice unit in Turner Place in number of mobile orders generated over the year. The mobile order option, offered through the Tapingo platform, is now available at more than 90 percent of VT’s retail concepts. It generated more than half a million transactions in its first year of availability in 2017-2018, which helped boost overall department traffic by about 1.9 percent over 2016-2017.

“The biggest adopters were the incoming freshman,” he observes. “If we continue to see [that rate of growth] in the next couple years, by year four you can just imagine where we may be at. Moving forward I think that’s really our future.”

That trend will in turn influence the department’s facility design approach, Faulkner suggests.

“I think the future of mobile ordering is in facility design,” he explains. “You have to have dedicated space to produce these orders. Look at Starbucks. About 70 percent of their orders come in from mobile devices, and it’s eroding the guest experience for those standing in line, so they’re retrofitting their stores [to deal with it], and that’s kind of what we’ve been able to do with [the recent renovations to] Fighting Gobbler and JP’s.”

Mobile ordering doesn’t necessarily also mean delivery, which is not an option now and is not being contemplated for the near future, Faulkner stresses.

“We love building community and having people come together [over food], so isolating them by providing delivery, which also involves insurance [concerns], [operational] complexities and food quality [compromises],” is not something he currently favors. “Plus,” he adds, “if we partner with a third party to deliver our food, we lose control of the food, so that is not at the forefront of our mission currently.”

The renovations to JP’s and Fighting Gobbler are also part of a comprehensive multiyear refresh of the food stations in West End. This summer, the Wrap World and Cutting Edge Delicatessen stations are slated for upgrades, with Wired (ice cream/coffee/pastry shop) and Leaf and Ladle (soups/salads) on tap for a face-lift in summer 2019 and Bistro Firenze (wood-fired pizza/Italian) in 2020, “so over four years will have a whole new front of the house in West End,” Faulkner says.

Also on tap for this summer is a change to the raised salad bar island in the Owens Food Court, which has already been levelled from its original 14-foot vertical height.

“It will remain an island but we want to open up the space in the food court and let customers see it,” Faulkner says, “so this 14-foot-high behemoth is going to come down to countertop height and customers will be able to engage with our staff.”

Another upgrade will occur with one of the campus’ seven national brand contracts as the Pizza Hut unit in the Hokie Grill at Owens Hall will add hand-stretched theater-style pizza to its personal pan pizza repertoire, something Faulkner believes is more in line with the preferences of today’s young adults.

The gluten-free station in D2 is one of a number of initiatives designed to guard health and promote wellness. An active ingredient and nutritionals website with allergen filter for any sort of food item was rolled out last fall along with an extension of vegetarian and vegan offerings. This year saw the complete removal of Styrofoam in all dining facilities, including national brand outlets as dining services worked with chains like Chick-fil-A and Dunkin Donuts to find alternatives to their regular Styrofoam-based products.

That initiative was complemented by the deployment of reusable-to-go food containers throughout the entire program: Over 10,000 of the new custom branded reusable to-go containers were purchased last fall. Also, a fourth campus OZZI collection machine was added in the Hokie Grill in fall 2017 and Deet’s has transitioned from Styrofoam to 100-percent compostable double-walled hot cups and lids. Going forward, dining services plans to begin selling custom branded reusable sporks to help reduce single-use cutlery waste.

Composting in the dining centers has been going on since 2009, but as of the current academic year, the dining program has begun to surpass the 600 tons a year compost mark, and last year it secured a new three-year contract with composting services provider Royal Oak Farm. Meanwhile, extra production that remains safe and consumable—some 100,000 pounds worth to date—is diverted to the Campus Kitchen project for distribution to the underprivileged.

An important component of VT’s sustainability program is the Dining Services Farm, which added a mobile high tunnel (a type of hoop house) this spring. On-campus production used in the dining program includes beef, pork, lamb, milk, fruit, produce and, most recently, eggs.

This year will also see the transition of summer farm employees from dining staff to paid student staff, a change that will support enhanced experiential student learning at the university.

Campus production is also aided by the recent addition of two hydroponic grow towers to the Owens Food Court, where fresh herbs are grown, harvested and served in-house, with 10 more of the units awaiting placement, perhaps in non-foodservice settings to promote the department’s commitment to local production and sustainability.

“We may move some into housing or academic space,” Faulkner offers. “We think it’d be pretty cool to put them somewhere other than a dining center where students can see them” outside of the dining context.

Dining services is also working with the university’s animal and poultry sciences department to use campus raised cage-free eggs in several dining centers.

The department is hardly finished innovating or improving. It is currently engaged in a feasibility study for central production that would include a gluten-free bakery operation designed to supply the whole campus. There are also plans for yet another new dining center, this one on the academic northwestern side of campus to serve as a kind of geographic bookend to the 2013 Best Concept Award winning Turner Place on the northeast side. Tentatively scheduled for opening in 2021, it would include a food-allergen-free station along with a mix of other concepts.

If past performance is anything to go by, it is sure to be spectacular.

Or, as Faulkner says, “We’re selling experiences, not just food, and our student body recognizes that and has responded.”