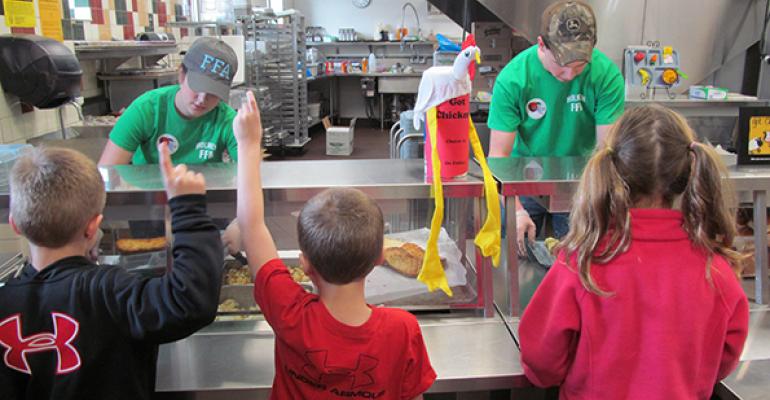 <p>FFA students were on hand to display their handiwork to peers.</p>
Onsite leaders>FM Best Concepts

Some schools have gardens that grow crops used in the cafeteria as a way to illustrate to students the cycle of food sourcing. The Holmen School District in Wisconsin took that idea a step further with its Winner Winner Chicken Dinner concept.

The meal event, held this past Jan. 30 at each of the district’s six school sites (plus a private school for which it provides meals), menued chicken that was raised by Holmen students on the high school grounds, along with hydroponic lettuce grown at district schools and a locally produced colored potato blend (the other side dish was cauliflower that was not from a local source).

In all, about 2,800 chicken dinners were served to students, staff and parents. Those who declined for various reasons were served an alternate meal.

The genesis of the project was a suggestion from a Future Farmer of America (FFA) student to Michael Gasper, the Holmen district’s nutrition services supervisor. FFA students had already been growing produce in gardens and the hydroponic lettuce for several years and were ready to take on an additional challenge.

Gasper’s department funded the purchase of some 650 day-old chicks in batches starting in May 2014, plus the equipment needed to raise them. Then, FFA students, working with advisor Roger King, took on the task of raising them to full-grown birds.

When each batch of birds matured, they were trucked to a processor in Utica, Minn., where they were slaughtered, chopped into eighths and frozen. After the last batch was delivered in November, there was enough chicken to make about 3,000 servings.

The recipe for preparing the meat was developed using a taste test to determine the spicing. “We had come up with four different seasonings and I added a fifth at the last minute that ended up winning the taste test,” Gasper told FM. The mixture includes garlic, paprika, cumin and cayenne pepper (the spicing was toned down for the servings intended for younger grades).

With the sides, the meals met the requirements for a reimbursable school lunch, for which about 30 percent of Holmen’s enrollment qualifies. Gasper admitted that the self-raised chicken ended up costing about twice what a standard commercial product would, but says “cost is not the driving factor here. The important thing is that it has allowed us to be involved in the education process.”

Gasper intends to repeat the Winner Winner Chicken Dinner this coming school year and make it at least an annual event going forward.