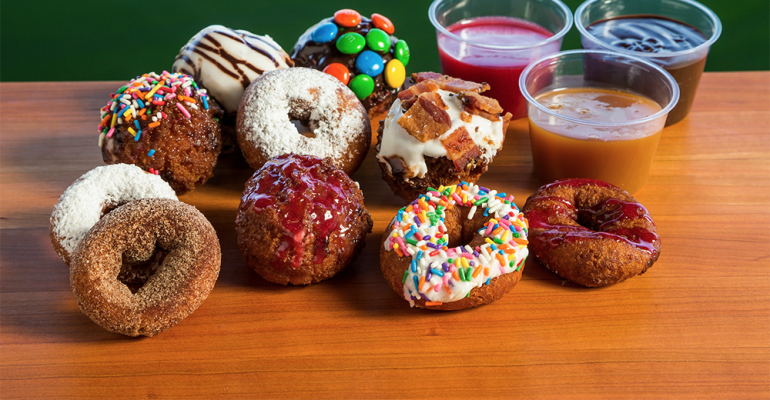 Seattle Mariners fans are lining up for customizable mini donuts made fresh in a nifty automated donut machine.

One of Chef Taylor Park’s first impressions of Seattle when he moved there in 2004 was the scent of fresh donuts wafting through Pike Place Market. Park, who has worked in one of Seattle’s most iconic restaurants, Canlis, is now the executive chef with Centerplate at Safeco Field. For this baseball season, Park has taken that sensory memory and turned into a runaway success with the new On-Deck Donuts concept.

During the research and development phase, Park and the culinary team visited Pike Place Market for some donut reconnaissance.

“We checked it out and had some interaction,’” Park says, adding that while the donuts at the market are traditionally just powdered sugar or cinnamon-sugar coated, by the time the stadium’s prototype was done, dips and toppings included raspberry glaze, maple glaze, caramel, sprinkles, bacon bits, mini M&Ms and Fruity Pebbles cereal.

“When we opened up on opening day, we didn’t realize how popular this was going to be,” Park says. “The lines were 90 people deep and converging into four of five different lines and no one knew where to go, but they all said, ‘We’re in line for donuts.’”

For $8, donut fans get a box of pure donut heaven: six donuts, freshly made and coated with any combination of the sweet glazes and toppings, plus sweet dips for decadent dunking. Fun fact: Mathematically, that can work out to thousands of possible combinations for each order!

The automated machine works with simple donut dough, portioned out perfectly into two “lazy rivers” as Park calls them of frying oil that turns the dough into hot, perfectly golden little donuts and also donut holes. “One person loads up the hopper, the two lazy rivers flow down, and the guy at the other end puts them into the boat and adds the sauces and toppings.”

The donut machine was a purchase that Park describes as “not as expensive as a nice convection oven, but definitely an investment.”

However, since On-Deck Donuts is conveniently located within a cross breeze of the stadium, the machine does some of its own advertising with the intoxicating aroma.

With the crazy lines in mind, the Centerplate culinary team is already looking to expand the donut operation, now located on the stadium’s main concourse (100 level), to another location either on the third level or on the other side of the main concourse.

The current lineup of donuts is “selling like gangbusters,” Park says, so it’s likely they’ll stick with this formula for this season, possibly trying some new flavors for the dough itself further down the road.

“We’ve messed around with the donut mix and tried flavored donuts, like s’mores with chocolate and marshmallow mixed in, but it doesn’t hold up to well and the donuts can look weird, or explode.”

And don’t expect to see any trendy mermaid or unicorn donuts on the horizon. Park wants to keep his donut game a little more sophisticated.

“We did just recently try a ‘unicorn’ glaze that was mother-of-pearl tinted with an apricot flavor,” he says. “It was pretty comical.”