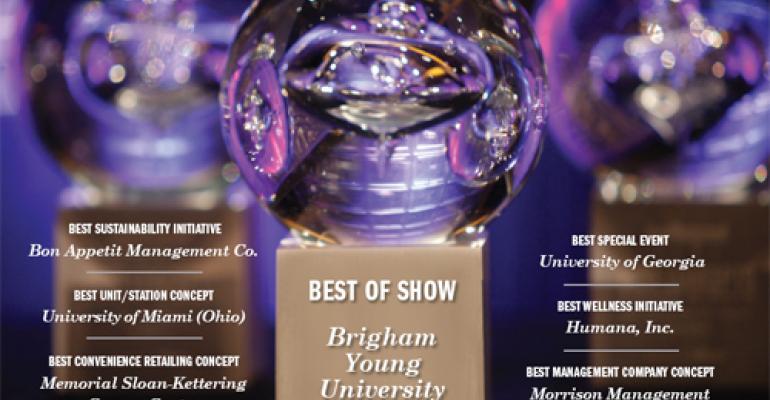 Each year, our editors evaluate entries for scores of nominees before settling on the winners. The entries themselves are judged on a variety of factors ranging from their creativity to their impact on a given program and their effectiveness in achieving targeted results.

At the end of the day, the Best Concept Awards are about IDEAS — great ideas, innovative ideas, think-outside-the-box ideas — that allow onsite operators to manage foodservices more successfully and more efficiently and to better meet customer expectations.

Consistently Ahead of the Innovation Curve

BYU's campus dining operation has been an industry leader for a long time. Under the leadership of Dining Services Director Dean Wright, it has literally re-created and elevated the scope, character and capabilities of dining programs on the campus over the last decade, a legacy that will last for years and which has provided a model for many other schools in the segment.

Among other ground-breaking innovations, BYU had been at the forefront of campus convenience retailing trends, especially with its pioneering Creamery on Ninth, generally recognized as the country's first real campus grocery store. Many of its retail operations, like the recently opened Blue Line Café in its new business center, have also set a standard for others to follow.

Last year, BYU opened its landmark Commons at Cannon Center dining complex, a five station multi-concept platform designed to reduce pressure on retail outlets and motivate students who aren't required to purchase meal plans to do so. It also represents a leap forward in the department's commitment to sustainability with its emphasis on local sourcing (including from the university's own dairy and beef herds), energy efficiency, composting and recycling.

And the innovations aren't over. Currently, BYU Dining is moving ahead with plans to open a series of market deli concepts designed for restricted nontraditional locations on campus where they can intercept traffic and add incremental revenues. The concept, called Blue Line Market and Deli, will be made possible by a planned opening this fall of a new, centralized culinary production center that will bring efficiencies of scale to meal preparation while allowing the scattered outlets to expand their offerings.

That BYU dining has achieved all this is impressive enough. That it has achieved it on a campus where the student population is older than is typical at most schools, and where only about six percent of the students are required to have meal plans, makes the department's performance remarkable.

THE BIG IDEA: Sustainability is a huge corporate goal for Bon Appetit and parent Compass Group North America, and Low Carbon Diet Day was designed to highlight both the company's efforts and to educate Bon Appetit customers on how different diet choices affect the environment.

The event was held on April 22, 2008, a year after Bon Appetit began implementing its Low Carbon diet initiatives in its kitchens. The goal: reducing greenhouse gas emissions in the highest impact areas of its operations by 25 percent over three years.

On that day, all 400 Bon Appetit cafes nationwide menued dishes emphasizing reduced carbon emissions, along with point-of-sale signs explaining the choices. For example, the day's menu.

Bon Appetit also unveiled its Low Carbon Diet Calculator on computer terminals set up in the cafes. The interactive program calculates the carbon impact of different meal choices, giving customers a tool to determine environmentally beneficial meal choices for themselves.

La Mia Cucina is a pizza restaurant, yes, but this is no mall food court Sbarro's. Rather, it is a destination restaurant that fills the need both for a social gathering space and for Italian comfort foods. The signature pies are baked in a Woodstone open-hearth pizza oven covered in miniature glass tiles while a Giotto pizza dough press, panini grill, Vulcan 10-burner gas grill, espresso and smoothie machines add an exhibition component to the atmosphere.

The environment blends rustic and contemporary touches in both the finishes and furnishings. Earth tone colors, distressed wood, a mixture of ceramic and glass tiles and strong textures highlighted with various levels of lighting create an attractive location for eating, socializing and relaxing.

Orders are placed at the counter and picked up a few minutes later (there is no table service). The check average is a robust $9.

THE BIG IDEA: The typical hospital gift shop is a drab affair managed by volunteers that offers an uninspired inventory of the usual suspects: candy, cards, balloons, bottled beverages and maybe some flowers. If you're a customer, you want to get in and out as fast as possible and you only go in if you really need something.

Gift Shop at 1275 has a different mission. It seeks to be a destination, instead of a desperation, stop. One enticement: a coffee shop component offering not just hot and cold beverages but a wide selection of freshly made grab-and-go items and gourmet snacks. It features a new front window counter seating area overlooking the street (York Avenue) where customers can relax and enjoy some of the soft classical music playing in the background. The freshly brewing coffee is a powerful merchandising tool for the space, enticing passers-by from the busy concourse outside.

The 1,500-sq.ft. shop, located in the hospital's main lobby, has the feel of a hotel shop, with a staff specifically picked for their customer service skills. It offers an extensive health and beauty line as well as a limited selection of garments, since many visitors to the cancer center end up staying longer than they originally planned.

The shop regularly offers web coupons for items like coffee and merchandise to lure in hospital staff and the street traffic helps keep Shop on 1275 meet its fiscal responsibilities, which allow it to be self-sustaining.

THE BIG IDEA: The Chef James Bistro replaced a previous station that served a niche audience in a space that needed to attract a much broader clientele. To effect this conversion, Vanderbilt Dining committed a $1.2 million investment that completely changed a fast-food style burger and chicken concept into a fresh, healthy, multi-platform cooking bistro that is food-centered, chef crafted and delivers an expanded, trendier menu straight from the oven to the customer.

Located in the student center in the hear of the campus, it targets students, potential students, faculty, staff, visitors and even medical center employees, delivering much better revenue per square foot than the previous iteration. The revenue increase in the first year was $100,000 and customer response overwhelmingly positive.

At Trail's End, a Feast

ENTRY: TRAILSIDE TASTE ALONG THE APPALACHIAN

THE BIG IDEA: With the famous Appalachian Trail terminating only about 80 miles from UGA's Athens campus, a theme meal celebrating the Trail is a natural. However, what sets this event apart is the meticulous preparation, the painstaking detail and the flawless execution. Not easy when you have to prepare for 8,200 meal plan customers.

Held concurrently in four campus dining commons last February 29th, it featured a menu incorporating special dishes from the inns and cafes that dot the Trail from Georgia to Maine as well as examples of “campfire cuisine.”

The event was designed to be educational, with informational materials and member of the Georgia Appalachian Trail Club available to answer questions about hiking the trail. Also on hand was the Georgia Outdoor Recreation Program with information about upcoming outdoor trips and a local camping equipment retailer (Half Moon Outfitters) with displays and demos.

As for the food, the menu included unusual trail concoctions like “spambalaya” and Limas With Ramps

THE BIG IDEA: It started with a simple and rather obvious question from one of the dining operation managers: “if we're going to subsidize something, shouldn't it be something healthy?” (at the time the location was offering free fountain soda)

Good question, and the result was Check Your Choices, which began as a subsidy program to encourage healthier vending choices, and later was broadened to encompass entrees and salad bars in the cafes as well. It now operates in 25 locations in the Humana network.

The idea behind Check Your Choices is simple: people don't like to be forced to make healthy choices, but they will respond to incentives. Hence, Check Your Choices doesn't remove unhealthy options from either vending machines or the cafes, but it does encourage the purchase of the healthier options by making them more cost-attractive.

The cost of the program, certainly relative to its benefits both for employee health and productivity and on company integrity (Humana is a health insurer among other things), is minimal. The vending program costs about $29,000 annually while the café component costs $132,000 for the four locations. The costs are partly offset by $86,000 in annual vending commissions.

Does it work? Definitely. Within Humana, there was a 30 percent shift in purchases of healthy snacks and between 10 and 21 percent shift in healthy beverage purchases. In addition, the vending company that supplies Humana in Louisville reported that Humana customers select healthy items 13 percent more often than the firm's other customers in that city.

THE BIG IDEA: How do you demonstrate to a population growing more ruinously obese that eating healthy can still taste great? That is especially a challenge in the healthcare segment where there is an implied institutional responsibility to model healthy behaviors.

That was the challenge taken up by Morrison in partnership with celebrity chef Cary Neff, author of the best-selling book Conscious Cuisine. Together, Neff and Morrison came up with Flavors 450, a series of more than 60 menu items, each delivering under 450 calories per meal and no more than 35 percent of the calories from fat.

Using great-tasting seasonal whole foods to show how healthful dining can be easy, delicious and affordable, Flavors 450 instructs and motivates customers even as it provides them with great meals at affordable prices (under $5). The menu is designed to be served both in hospital retail and senior living environments, and Neff's involvement, which includes personal appearances at venues where the concept is introduced, helps get attention for the message in a way that less “star power” might not.

Morrison piloted Flavors 450 at Franklin Square Hospital in Baltimore a year ago and has expanded it to three more facilities since. It plans to add 10 more sites before the end of the year.

CONCEPT: GARDEN OF EATIN': A GASTROGNOME IN PARADISE

FSD John Pence lent his “image” to the mascot for this theme event, designed to celebrate KSU's horticultural, agricultural and entomological heritage. Pence's “Gastro-Gnome” character (kudos to the Photoshop team!) led diners through the Garden, making pertinent points about each dish and about dining as more than just a fuel stop, a message KSU Dining seeks toimpart to students as part of its mission.

It takes a plenty of self-confidence, as well as a willingness not to take oneself too seriously, to pull this off. It also takes a good thick skin as well as a good relationship with students, when the gnome also is a instructor (as Pence is) in the school's HRI program .

Its purpose was to alert and educate students about the impending removal of trays from a pair of campus all-you-care-to-eat dining halls.

Rather than engage in paint-by-numbers explanations, the video uses an old-time silent movie approach (complete with intertitles) to send the message.

Meyer stars as a Chaplinesque administrator who shows a pair of befuddled students how to navigate a dining hall without the use of trays. The last scene, with Meyer selling off the now-useless trays on the street is a comic capper to an inspired piece of marketing.

A sense of humor is a necessary tool in onsite dining. In evaluating Best Concept nominees, we ran across a few college operators who filled the bill as straight men in ding promotions that relied on sending humorous messages to customers. College dining can be a tough segment because of the natural age disconnect between most directors and their customers. Willing to go the extra mile to close that gap deserves an extra hand from us here at FM.