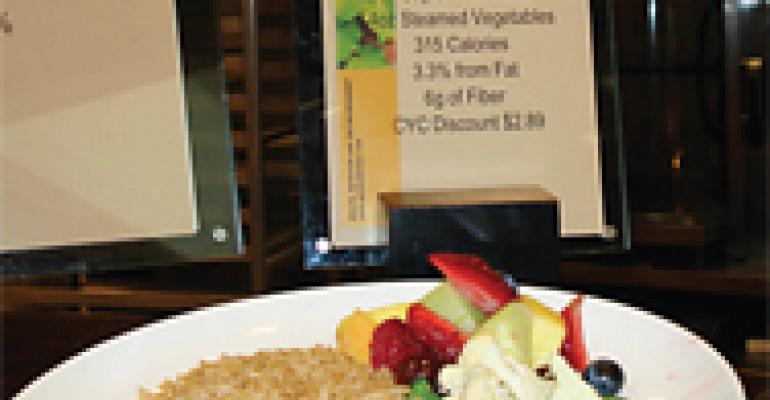 THE BIG IDEA: It started with a simple and rather obvious question from one of the dining operation managers: “if we're going to subsidize something, shouldn't it be something healthy?” (at the time the location was offering free fountain soda)

Good question, and the result was Check Your Choices, which began as a subsidy program to encourage healthier vending choices, and later was broadened to encompass entrees and salad bars in the cafes as well. It now operates in 25 locations in the Humana network.

The idea behind Check Your Choices is simple: people don't like to be forced to make healthy choices, but they will respond to incentives. Hence, Check Your Choices doesn't remove unhealthy options from either vending machines or the cafes, but it does encourage the purchase of the healthier options by making them more cost-attractive.

The cost of the program, certainly relative to its benefits both for employee health and productivity and on company integrity (Humana is a health insurer among other things), is minimal. The vending program costs about $29,000 annually while the café component costs $132,000 for the four locations. The costs are partly offset by $86,000 in annual vending commissions.

Does it work? Definitely. Within Humana, there was a 30 percent shift in purchases of healthy snacks and between 10 and 21 percent shift in healthy beverage purchases. In addition, the vending company that supplies Humana in Louisville reported that Humana customers select healthy items 13 percent more often than the firm's other customers in that city.