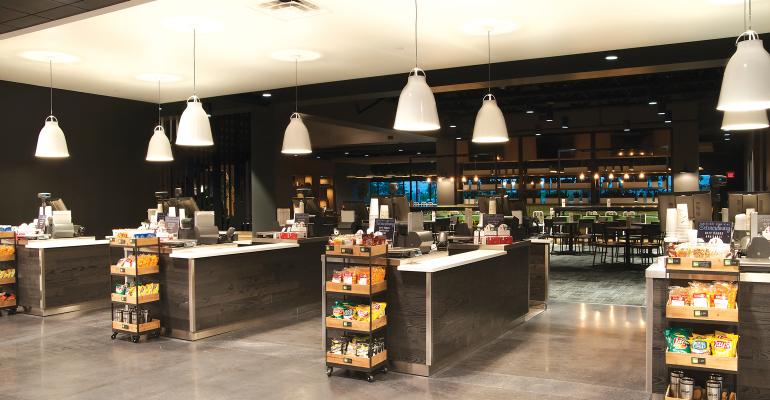 Bartolotta Restaurants
The Kitch was designed as a collaborative and relaxation space to let Kohl’s staffers unwind, so there are no company logos or references and pricing has been calibrated to encourage repeat visits.
Onsite leaders>FM Innovators

B&I Innovator of the Year: Bartolotta Restaurants at Kohl’s Headquarters

The Kitch café at the Kohl’s headquarters complex in Menomonee Falls, Wis., contradicts two general assumptions about today’s corporate dining segment. One is that significant investments in providing cutting-edge cuisine as an employee amenity is largely the province of high-tech firms in the Northeast and on the West Coast that must compete for scarce techie talent; the other is that managing massive B&I foodservice operations is mostly the province of established, large-scale corporate dining contractors.

Kohl’s, of course, is no Silicon Valley virtual world wonder, but a traditional company operating the most down-to-earth of businesses—department stores. And the firm that designed and manages The Kitch, Bartolotta Restaurants, is not a traditional foodservice contractor but one known mostly as a local commercial restaurant company.

Yet the 32,000-square-foot The Kitch is a marvelous example of a high-end and comprehensive corporate dining service, with 16 food stations serving everything from pizzas and pastas made in wood-fired ovens to freshly rolled sushi, artisanal sandwiches and prepared salads with ingredients like arugula and goat cheese.

And just like the Googles and Microsofts of the world, Kohl’s has committed to a significant onsite foodservice as an employee retention and recruitment tool, recognizing that even traditional retailing firms have the same talent search challenges as emerging economy businesses even if its not talked about as much.

Meanwhile, operating B&I foodservice not only gives Bartolotta a new market, but an internal asset as well.

“Here’s what’s also interesting about [expanding into B&I],” explains company co-owner Joe Bartolotta. “A lot of our employees who have been with us for a long time are looking for the next phase in their lives, so work/life balance is becoming more important in our industry. What’s interesting about the corporate side is that it’s Monday to Friday [with] weekends and holidays off. You start at 6 a.m. and you’re done by 2:30 to 3 p.m. That is very desirable, especially for our female employees. We’re finding we are able to offer this [option of working in an onsite environment] to long-term employees who want to stay in the business but are done working the hours. So rather than losing them altogether we have a great outlet for them now.” 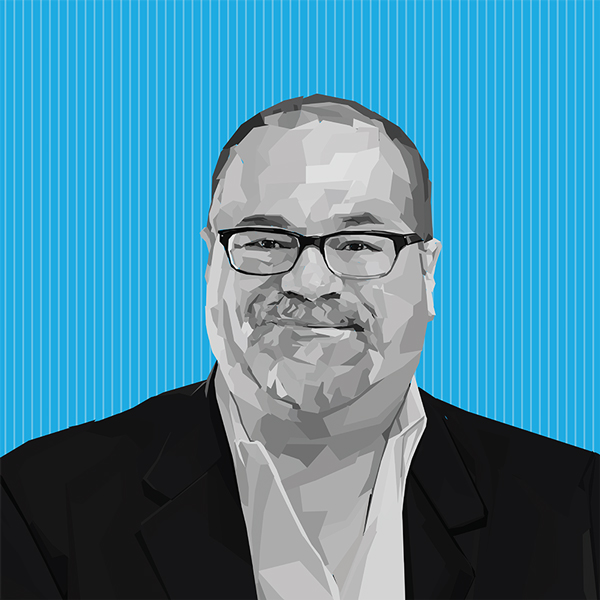 Not exactly an onsite newcomer

Bartolotta Restaurants may not be a familiar name on the national foodservice contract scene, but the company is not a total newcomer to the industry even though it remains primarily a commercial restaurant operator with a dozen fine dining and casual eateries in the Milwaukee area.

Before taking on The Kitch at Kohl’s, Bartolotta had already managed an onsite café called the Downtown Kitchen in the 40-story, multitenant U.S. Bank Center building in downtown Milwaukee.

That relationship “started four years ago when we were approached by U.S. Bank,” says Bartolotta. “They said they have AAA rents but that the tenants are very unhappy with the quality of the foodservice in the building.”

Bartolotta had a previous catering relationship with U.S. Bank and was asked to look into and possibly make a bid to take over operating the café as the dining management contract was coming up for renewal.

The company submitted proposals for everything from food and beverage to design and décor and got the contract.

“They loved it, so we moved forward and it has been a wild success,” Bartolotta says.

Success with Downtown Kitchen led to his taking an interest in Kohl’s, a major presence in the local market that was looking for a management firm to renovate and operate its newly consolidated headquarters café.

“I reached out to [Kohl’s President/CEO] Kevin Mansell and made inquiry if they would be interested in checking out Downtown Kitchen,” Bartolotta recalls. “He sent a team to check it out and then came back to me to say they loved what we did and [said,] ‘We want to partner with you.’”

Bartolotta was awarded the contract and after about a year’s worth of planning and development, the company formally took over management of the Kohl’s cafe this past April. It unveiled the fully redone and expanded The Kitch in October.

The scale of The Kitch operation is a significant step up from Downtown Kitchen, but the lessons learned in that facility have helped Bartolotta manage its new operation in an industry with significant differences from its traditional commercial restaurant operations.

One, of course, is that rather than operating a commercial venture as an independent entity, a contractor works for a client that has its own expectations that must be incorporated into the operation.

“Kohl’s presented me with a shopping list of everything they wanted to see in the space,” Bartolotta says. “They wanted to seat 750 and [they wanted] a big barista area with a very upscale coffee program. They also wanted lot of variety and the quality associated with our brand.”

Bartolotta worked with local design firm Kahler Slater and designer Amber McCracken on the café, which ended up with 16 food stations, most of them developed especially for The Kitch (a few of the concepts such as the artisanal sandwich station and the Jimmy John’s-type deli station, had already appeared in Downtown Kitchen).

One thing that doesn’t appear in The Kitch is any reference to or internal branding of the Kohl’s name, a strategy client and contractor very much agreed on.

“We wanted the associates to feel that they were leaving campus for a while” when they entered the café, he notes.

Another difference between the onsite The Kitch operation and commercial restaurants is the pricing strategy. A what-the-market-will-bear pricing approach, so understandable in the commercial world where Bartolotta traditionally operated, works against Kohl’s desire to use the onsite dining operation to encourage employees to stay on site for lunch, so prices at The Kitch have been set to compare favorably with offsite alternatives.

There is a “minor” subsidy to facilitate that, Bartolotta says, but he also recognizes that too aggressive pricing is counterproductive to his own company’s interests.

“It’s not the daily spend I’m concerned about,” he explains. “On the street I would try to generate as much revenue per visit as possible, but in this environment, because they’re captive and in the building so much, I don’t want to be too aggressive on my pricing because I want them to come in three, four, five times a week, not once a week.”

The Kitch was capturing nearly half the building’s some 7,000 employees in the early going on a typical day, a number expected to rise as the weather got colder. 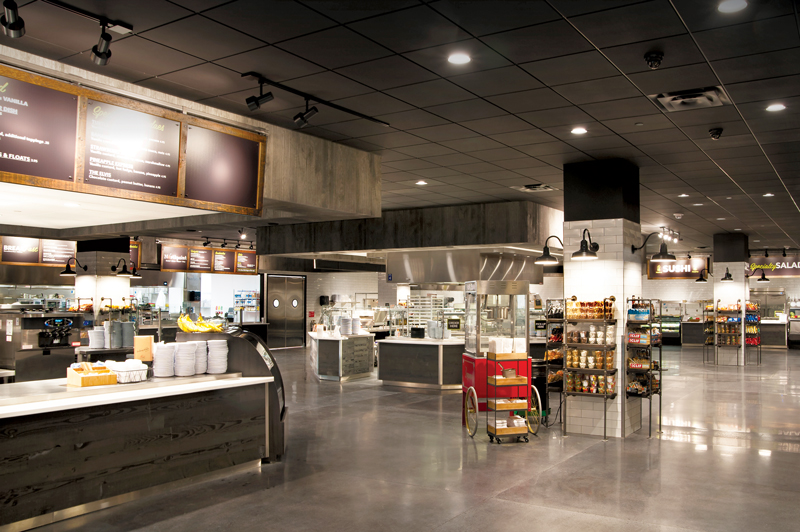 The 16 food stations in the Kitch café offer Kohl’s staffers a wide range of premium dining choices, some developed expressly for this venue. Photo: Bartolotta Restaurants

All about the food

The station concepts in The Kitch include the standards like pizza, short-order grill items and salads, but they all have that extra premium touch that comes from being managed by an operator of fine-dining restaurants. For example, the pizza station makes its Neapolitan crusts using a very high-end brand of “double-zero” flour called Caputo (the “double-zero” refers to the high level of refining that produces authentic Italian crust).

Bartolotta notes that the building population is about 65 percent female, so lighter choices and vegetarian options were critical to the overall menu mix. Concepts catering to this demand include a large salad bar and a separate prepared salad station where the choices are made to order from a large selection of options, as well as an extensive Asian station where customers can get ramen bowls, freshly made sushi and wok dishes with to-order combinations of ingredients like lean proteins and fresh vegetables.

A World Cuisine station rotates different culinary traditions and strives for authenticity. For example, for its Indian cuisine program it brought in Alamelu Vairavan, who has a cooking show on the local PBS station and has published several cookbooks on south Indian cuisine, to train the chefs.

Also notable is a sweets station that has two custard machines and makes its own donuts and donut holes. The latter, freshly hot and dusted with powered or cinnamon sugar, is a big favorite, especially in the afternoons. While most of The Kitch closes by 2:30 p.m., the sweets station, as well as the coffee station, stays open until around 4:30 p.m. to serve the mid-afternoon sweet tooth crowd.

Extra attention was also paid to the décor. For example, for the seating, Bartolotta actually went to beer hall in St Louis and took pictures of the enormous communal tables. He then contacted the supplier, and the Kitch now has six of the tables, which are “some of the most popular seating we have,” he says.

The Kitch consolidates several cafés that had operated in different parts of the Kohl’s facility, the idea being that the single café would become a central collaborative and socializing space for associates. The eatery’s expanded footprint includes former surrounding office space that was shifted to the spaces formerly occupied by a pair of satellite cafes consolidated into The Kitch.

The café is backed by a large, fully equipped production kitchen with convenient access to the loading docks and sizeable warehouse space. It is also a more pleasant environment in which to work than many production kitchens as it features floor-to-ceiling windows along one wall that bring in natural light.

Meal service isn’t confined only to The Kitch’s environs. Carry-out and delivery orders as well as catering are available across the complex, including events in a big ballroom where Kohl’s launches new products.

The takeout/delivery option does come with a wrinkle, Bartolotta admits.

“Kohl’s wanted no disposables, so we have to collect the plates,” he says. “Every floor has multiple pantries with receptacles where [employees can deposit used servingware] and we do a floor sweep at end of each shift.”

Bartolotta says Kohl’s employees have been “pretty good” so far at disposing of their plates and silverware in the proper places.

Most unusually, the Kitch also delivers several hundred daily meals to the youngsters and staff in Kohl’s onsite daycare center.

“We serve them breakfast and lunch,” Bartolotta explains. Both hot and refrigerated food is trucked to the daycare, located in a separate building from where the production kitchen is. The menu is published a week in advance and preportioned for the most part, though there is also some family-style service depending on the dish. There’s always plenty of fresh fruits and kid-friendly vegetables like carrot sticks as well as PB&J sandwiches and mini hot dogs, “all approved by the parents and a nutritionist,” Bartolotta says.

“Everything about this project is a commitment by Kohl’s to their associates,” Bartolotta summarizes. “That’s why I wanted to be involved in this, because Kohl’s gets it that an army fights on its belly, that the workspace is evolving and you have to change. So creating exciting, collaborative spaces with unique food offerings is not only a recruitment tool but also a retention tool. Young employees today want to be involved in something cool.”