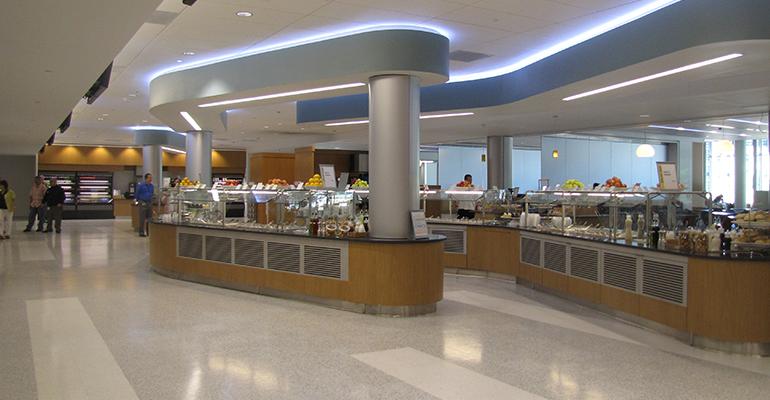 B&I Innovator of the Year: Capital One

Lunchtime for the more than 7,500 employees who work at financial services giant Capital One’s sprawling 10-building West Creek campus in Richmond, Va., is also decision time: Where to eat?

And we’re not talking about deciding which off-campus restaurant to drive to.
The best choices are right on the premises and all reachable from any part of the grounds, thanks to the hundreds of bikes available to associates to navigate the campus.

Capital One’s dining services vendor, Restaurant Associates (RA), operates four cafés at West Creek, each with multiple serving stations that offer distinctive food options that make them, in effect, destination restaurants. Those choices contribute to a very impressive daily lunch count that averages 5,000 to 6,000, according to Eamonn Bagnall, vice president of operations for Restaurant Associates at Capital One.

“Each café has a different menu,” he says. ”Our customers go online or use the mobile app and decide which building they may want to go to on each given day.” 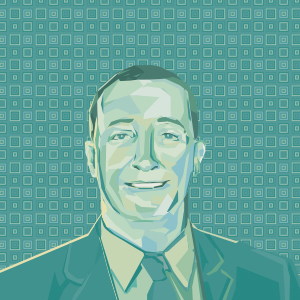 HEAD OF DINING: Eamonn Bagnall is vice president of operations for Restaurant Associates at Capital One West Creek.

Each of the four cafés has four or five full-service stations, plus self-serve options like salad, grain and antipasti bars. An action station in each café rotates its menu focus weekly.

“The action station can go from gourmet grilled cheese to stir-fry to bibimbaps to fried rice,” Bagnall says. “We span the range from comfort to eclectic to high-end; it’s pretty varied.”

Other fixed-station concepts scattered across the four sites include grill, comfort/barbecue and pizza, but the menus vary from site to site on a daily basis. “We might do a Creekstone burger in one location and we might have a New York steakhouse concept going on in another location,” Bagnall says.

A very popular Mexican-themed station called Taqueria is a full-time feature at one café and rotates through the other three.

Every café includes Capital One’s Be Well-themed healthy eating options at multiple stations, selections that can be purchased with a 25 percent discount to encourage nutritious dining. “There’s a continued trend toward more healthier dining options, though there’s also an audience that is just going to have a cheeseburger no matter what happens,” Bagnall says, adding that the cafés have options to satisfy those customers as well.

Be Well menu items have nutritional information on display for quick reference, and scannable bar codes tie in to the MyFitnessPal application to allow diners to quickly apply their choices to their daily diet regimens.

The West Creek population’s demographics generally skews younger and is very diverse for the area—“I would say Capital One is one of the drivers of diversity in Richmond,” Bagnall offers—and a variety of ethnic-themed stations, such as FM Best Concept-winning Indian cuisine concept Tiffin, rotate through the cafés to meet their expectations. There are also concepts developed in house by the culinary staff (Gourmet Grilled Cheese, Low Country Boil, Asian Stir Fry, etc.) to keep things interesting and provide variety.

A dedicated pastry chef with more than 15 year’s experience oversees the onsite bakery operation that not only supplies campus venues with fresh-baked goods but also turns out cakes, cookies and pastries for retail sale to associates.

To accommodate the heavy traffic the cafés experience during the lunch hour, self-order kiosks allow transactions to be facilitated efficiently. Payment is through various methods, from straight cash and traditional credit cards to more exotic platforms like ApplePay and Google Wallet.

One of the cafés, The Terrace, was recently renovated into an entirely new venue called EATS, incorporating a bright, airy ambiance with kiosk ordering, extended salad bars and exhibition cooking—at the pizza station, for example, customers can see the chefs making the dough.

In addition to EATS, there are The Commons, The Village and The Den cafés. The Commons includes a bakery called Treats and one of two branded Starbucks coffee bars that stay open late into the afternoon (the cafés generally close after the lunch period in the early afternoon). 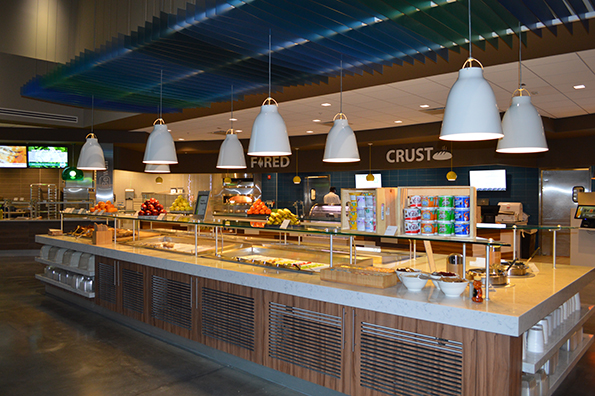 The most recently renovated of the four cafes on the Capital One West Creek campus is EATS, which boasts kiosk-based ordering, enhanced salad bars and scratch cooking performed in front of customers, such as at its pizza station. Photo: Kari Bowes

EATS has an exclusive made-to-order burger station, BYOBurger, while The Den boasts the full-time Taqueria. EATS also incorporates one of the three campus micromarkets, giving it round-the-clock availability. Another micromarket is a standalone called Nourish in a separate location away from the cafés. The micro-markets, as well as the traditional vending machines, incorporate touch-screen interfaces that also display nutritional information.

EATS and The Commons, which was also recently renovated, tend to get more traffic than the other two locations, all things being equal, but daily menus and café proximity are also major factors in where associates decide to dine.

Capital One’s free bike program, which deploys several hundred bicycles for associates to use to get around campus, makes traveling to even the remotes café practical, except in inclement weather, for everyone. The bikes include baskets for laptops so associates can “take their work with them,” and the sight of people on bikes with their laptops heading to meetings and conferences is a regular feature of the West Creek campus.

A central kitchen produces bulk ingredients like sauces, but most of the production is done in front of customers at the cafés. The central kitchen also serves as the production center for onsite catering and for the many grab-and-go items made fresh daily and sold in the cafés as well as in the three separate coffee bars and the micromarkets.

The culinary staff is regularly bolstered with a few students from the CIA and Stratford University, both of which have partnerships with RA. These, Bagnall emphasizes, are not simply “cheap labor” for mundane tasks but are engaged in all facets of the operation.

“We want these kids to learn with us and then come back and work with us,” he says, “so we try to run them through both the front- and back-of-the-house activities and in supervisory roles.”

The kitchen tries to procure local product during the growing season, but the main sustainability initiative is a composting program and closed-loop partnership with a local grower called Shalom Farms located 30 miles from the campus, where crops for use in Capital One kitchens are nourished using compost from those kitchens—nearly 60,000 pounds last year. In addition, all containers and dining implements used in the cafés are now compostable.

Extra food production is donated to a local organization called FeedMore, which provides meals to area charities, a total of nearly 15,000 meals in 2015.

Catering is significant—and growing, given a 77 percent year-over-year increase from 2014—in the Capital One West Creek foodservice world, with 50 to 60 drop-off orders each day. Online ordering makes this service extremely convenient. 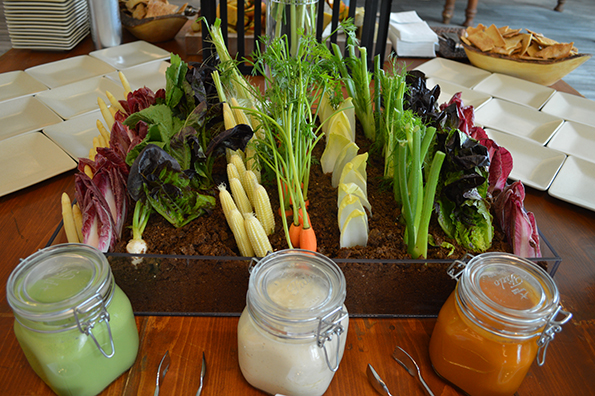 Bagnall attributes the growth to new and seasonal menus introduced in the past year, along with a Showering Them With Kindness program that targets catering decision-makers like administrative assistants.

“At least four times a year we identify all our frequent users and we individually drop a card thanking them for their business,” Bagnall explains. “The card typically comes with a gift like a fresh homemade cookie or a jar of homemade salsa with the recipe. It has been very helpful in retaining our current catering customers and spreading the word to new customers also.”

This is especially important as the in-house kitchen doesn’t have exclusivity on onsite catering and departments are free to order from off site if they prefer.

The biggest catered event was a "Spring Zing" earlier this year for 5,000, including employees and their families. Held outdoors on the campus grounds, it featured a menu heavy on traditional items like barbecued meats, hot dogs and mac and cheese. “We kind of wanted to make it a festival-type environment but with a higher quality of food,” Bagnall offers.