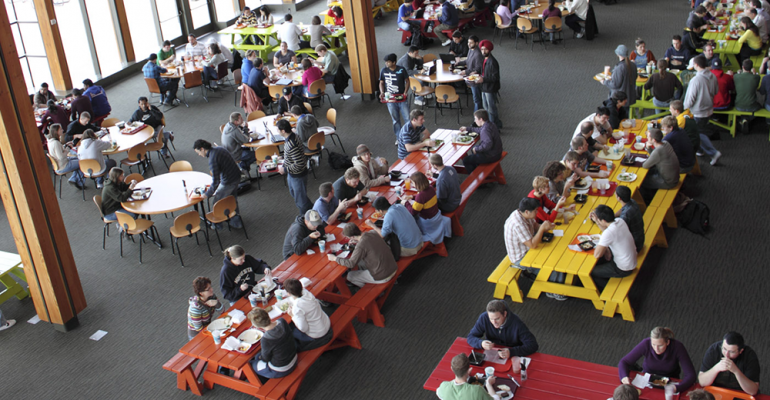 A corporate campus with medieval towers, a treehouse meeting room and a 19th century-style farmhouse has dining venues just as creative.

When you walk into the towering King’s Cross dining hall on the “Intergalactic Headquarters” campus of health records software firm Epic Systems in Verona, Wis., the first thing that probably strikes you is the clock, a huge old-fashioned railway station timepiece that hangs over the seating area.

King’s Cross is one of the two main dining centers at the Epic Intergalactic Headquarters and is located inside its Wizards Academy campus, which is just one section of the 350-acre, 25-building headquarters complex. Others include the Farm campus with its replica 19th century farmhouse complete with a stable, creamery and a wall displaying the various components of a disassembled tractor, and the Storybook campus, with themed buildings based on works such as Alice in Wonderland, the Wizard of Oz and Willy Wonka.

Related: Behind the scenes of B&I Innovator of the Year: Epic Systems 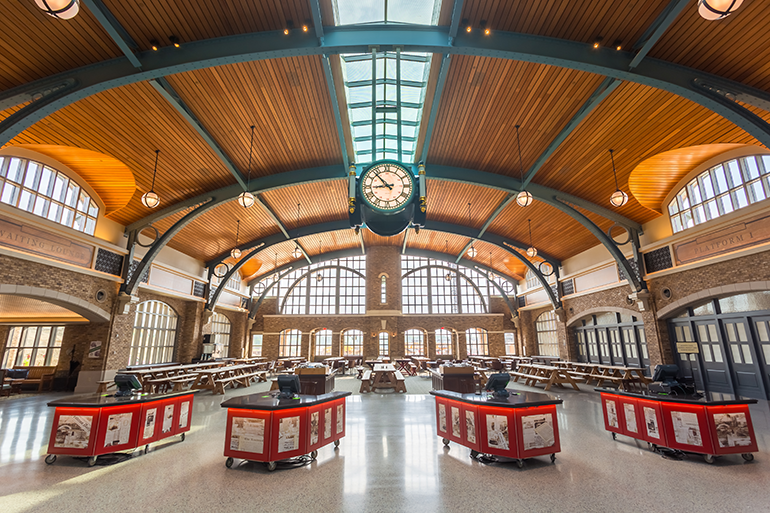 Scattered through the different campuses are whimsical touches ranging from a meeting room located literally in a treehouse and a Humpty Dumpty sculpture that greets visitors at the complex entrance to a multicolored snakeskin mural stretching dozens of feet along one corridor and a series of individually themed spaces evoking scenes ranging from Grand Central Station to “Indiana Jones.”

Complementing this fantastical mélange, all part of a unique company culture envisioned and promoted by Epic Founder/CEO Judy Faulkner, is a large touch of cutting edge, real-world technology (Epic, after all, is one of the most sophisticated software companies in the world). For instance, there’s the 11,400-seat Deep Space auditorium that is located completely underground. For sustainable heating and cooling of the vast complex, Epic has invested in a geothermal HVAC system with more than 6,000 bore holes that may be the largest of its kind in the country, while electricity is produced from 18 acres of solar panels and six industrial-sized wind turbines.

To provide dining services to the 10,000 employees based at Intergalactic Headquarters, Epic operates an onsite foodservice program centered around two major dining centers, King’s Cross and Cassiopeia. Both boast multistation serveries with a mix of hot and cold food choices ranging from an ever-changing rotation of entrées, grilled items, soups and desserts to sandwich and salad bars where customers can create their own combinations.

Supplementing the two main dining centers are a series of free-standing branded dining outlets with specific themes. They include Mikey’s Deli, an East Coast-style deli offering made-to-order sandwiches, bagels and hot specials; Chopsticks, an Asian café menuing sushi, noodle bowls and wok dishes; Farmer’s Market, which offers a rotation of cuisine themes; Spit & Fire, a comfort food outlet with a rotisserie; and Lou’s Soda Fountain (named for Faulkner’s father, who owned a pharmacy with a soda fountain), where housemade gelato as well as ice cream dishes, sodas and phosphates are served. The gelato is also available at the main dining centers. 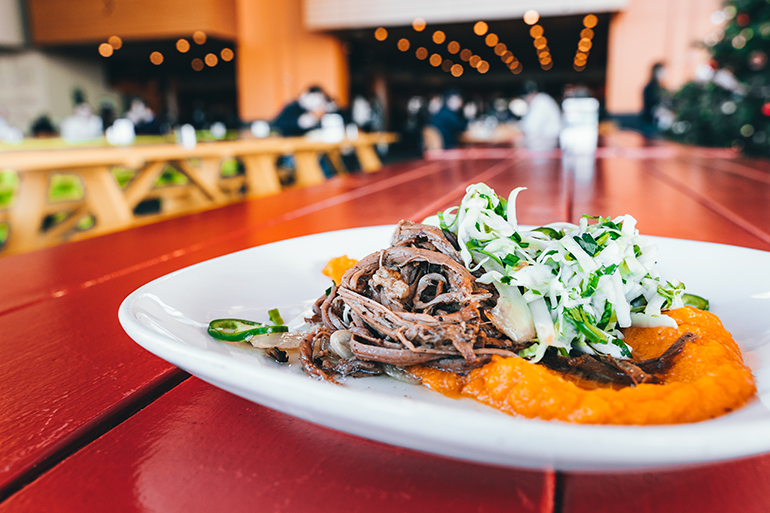 As befits such a creatively designed complex, the dining spaces reflect the themes of their surroundings. For instance, Spit & Fire, located in the Fortress building on the Wizards Academy campus, has a “dungeon” décor while Mike’s Deli has a New York theme and Cassiopeia emphasizes the great outdoors with its huge picture windows that overlook an adjacent lake and waterfall. King’s Cross, with that iconic clock, evokes Paddington train station in London.

But setting décor aside, any venue that must feed the same people day after day has to concentrate on menu variety.

“Ultimately, our mindset is that the folks we are serving don’t change, so we try to change the menus every day,” says Executive Chef Andy Patterson, who oversees Epic’s self-operated dining program. “The smaller venues do have some [standard] items because we know people like them. For example, the deli is fairly static, so if you want a pastrami on rye it will be there every time, whereas in Cassiopeia and King’s Cross, we do have salad and sandwich bars where [you can get the same things every day] but the entrées and grill items change. In my 12 years here, no two days’ menus have been totally the same to my knowledge.”

Patterson’s background reflects the somewhat eccentric nature of the entire Epic experience, as before he joined the company, he was working as a draughtsman for an architectural firm.

“I think one of the interesting things about Epic is that people come here from different backgrounds,” he remarks. “When I came here Epic was a very different company and the campus was very different, but I had a love of food and I wanted to explore that. I was able to get in here very early on the culinary program, but as we’ve grown, I’ve also been able to get involved in the extension of our campus and consult on the culinary spaces from an architectural perspective.”

Each dining outlet does its own production with the exception of Mikey’s Deli, which has some of its menu produced in nearby Cassiopeia. There is also a central bakery that turns out breads, sweets and other baked items for the entire campus.

Most of the dining outlets are open only for lunch, then stay open into the mid-afternoon. The typical lunch sees 5,500 to 6,000 meals served a day.

Breakfast is offered from 7 a.m. to mid-morning from eight kiosks scattered across the complex. They offer coffee drinks, breakfast pastries and simple breakfast items like hard-boiled eggs, egg bake cups, breakfast burritos and oatmeal. Two of the kiosks stay open into the mid-afternoon. Breakfast counts run 1,500 to 2,000 a day.

While the employee population will skew somewhat younger, as is typical for a technology firm, Patterson says there are also a fair number of associates who have been with the company for quite a few years as Epic, which was founded in 1979 with a staff of only three, was already on the fast track to its current multibillion-dollar size before the 1980s were out. The mix of millennials and veterans means the dining program has to accommodate both traditional and adventurous tastes.

“Ultimately, we rely on the talent of our staff and hang our hats on that to keep the variety really interesting,” Patterson says, “so we put a lot into our hiring [of culinary staff]. We want people who respect food, who love it and have a passion for it, and while we obviously have oversight at each location, a lot of the concepts that go into balancing the menus come from our sous chefs and the folks who work in those kitchens.”

In addition, “during certain periods and certain times of the year, we are able to open up opportunities for all of our cooks to participate in chef’s specials, either to use up things we have on hand or just to try new things and give folks who normally don’t have that creative outlet the chance to try different things.”

The staff have come up with some rather unusual dishes that have served to make dining at Epic a culinary adventure for those so inclined. Recent selections include ziti with pumpkin seed pesto, lablabi (a Tunisian chickpea stew), tonkotsu ramen, mole amarillito con chochoyotes (an Oaxacan pork stew) and samosa stuffed pepper with mango chutney and wilted chickpea spinach salad.

Patterson says he and his staff constantly monitor ongoing food trends and emerging preferences, especially among younger and college-age individuals, to keep up with what his customers will want. Off-campus competition to the in-house dining program isn’t much of a factor given the size of the complex and the time it takes to travel even to nearby eateries, but Patterson is still careful to make sure his offerings are priced competitively as a further encouragement to stay onsite.

At the branded outlets, taco day at Farmer’s Market and the daily sushi—including rolls, poke bowls and even the occasional nigiri—at Chopsticks are highlights.

Perhaps topping them all on the hit list as the perennial favorite selection is the housemade gelato, and Patterson says the in-house bakery also receives frequent compliments as well as recipe requests for its desserts and pastries. Among favorite bakery items are cinnamon rolls, morning buns, chocolate croissants, chocolate chip cookies, cheesecake, tiramisu and really “anything chocolate.”

An add-on service provided by the dining program at Epic is an after-hours leftover food share program that holds over some of the food prepared earlier in the day for associates who may have to work later.

“We want people to explore [nearby Madison] and what the city has to offer, so we don’t actively do a dinner service, but we are also in healthcare and sometimes things come up,” Patterson explains. “We have late meetings and issues we have to solve that we have people working around the clock on, so we want to have options on campus for them to get something to eat when they are in those situations.”

The food is packaged cold but can be re-thermed in a break room microwave.

The program is not only a benefit for late workers but also a way to reduce waste of already prepared food. Any prepared food not served to associates is donated to local food banks, while the kitchens send preconsumer vegetable scraps to a local farmer to feed to his pigs.

The Intergalactic Headquarters complex also has three micromarkets where some pre-packaged products, including housemade sweets, are made available, along with beverages and even toiletries for frequent travelers.

Another key assignment for the in-house dining team is providing meals for the 200 to 1,300 individuals who come to Intergalactic Headquarters to receive training on the company’s systems. It has its own kitchen, which also caters onsite meetings.

“Just like the efforts we put into the buildings on our campus and getting people really excited to work, the food program plays a similar role,” Patterson summarizes. “Basically, we want to feed people good food and keep them energized and happy. We want to be a highlight. We want people to visit our campus and [say] that the food is really good, and we want anyone who leaves to say they miss us. We are a recruiting tool and a benefit for anyone who works here.”