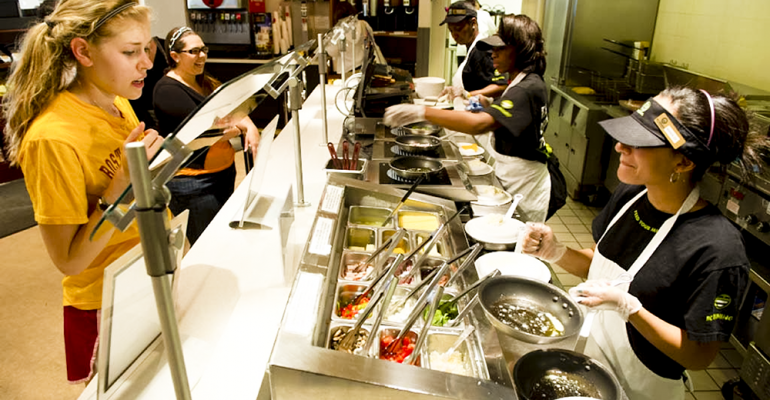 BC Test Kitchen program that involves the whole culinary team in creating new dishes is just one creative initiative at this New England private institution.

Boston College Dining Services (BCDS) is one of the leaders in the higher education sector across a range of areas, from menu and dining venue updates to special/pop-up events, sustainability measures, mobile ordering and even campus food delivery.

Dining at Boston College is entirely retail-based, with the mandatory meal plan that is required of all first-year students and students living in campus residence halls without kitchens consisting of a declining balance account that can be used at any campus dining location.

Related: Behind the scenes of College/University Innovator of the Year: Boston College

That makes keeping menus fresh and up-to-date at the various dining outlets one of the big challenges for the dining program, a challenge BCDS helps meet with an interactive internal initiative called BC Test Kitchen, through which all dining staff members are invited to create new menu items. 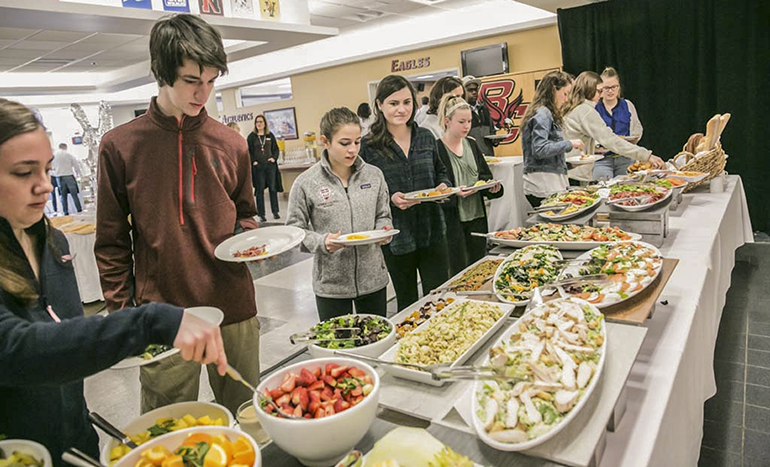 “We have tasked our people at each location to run two a week,” explains Elizabeth Emery, BCDS director. “It doesn’t have to be a full entrée; it could be as simple as a dessert or a new roasted vegetable, and it has been a great way for us to be more innovative.”

Once a dish has been accepted, it is offered at one of dining outlets with the BC Test Kitchen logo on the signage and accompanied by comment cards.

“We run [the dish] a few times and if its real popular, if it has the sales to support it and the [favorable] comments, we’ll then add it to the permanent menu to replace low-sellers,” Emery says.

The suggestions can come from anyone in the department, even cashiers and dishwashers, who’ll usually work with a manager to nail down the recipe and work out prep procedures, procurement needs and pricing.

“I was surprised when we first rolled out the BC Test Kitchen how many of the new options our team put up that were plant-based,” Emery remarks. “This was great for our team to see because we have a lot of people who are used to cooking meat, not plants.”

Like at many schools, she’s been trying to modify that with more emphasis on plant-forward cooking. In fact, BCDS had the Humane Society in to do plant-based cooking session with its staff this past summer, with another one set for spring break in March.

Test Kitchen has been in place for several years but only really took off last year, Emery notes.

“It went well in the first year, but then didn’t do as well last year, so we really pushed the team this August [to put new effort into it] because we want to continue to make sure we are cutting edge and keep coming up with fun new items.” 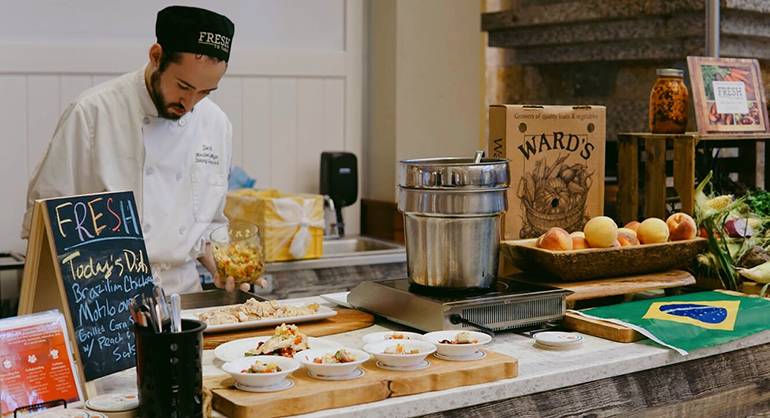 That was a critical concern, Emery emphasizes, because “in most large operations like ours, the food production system is challenging, and you usually need advance notice to introduce new menu items because it’s got to go in the system to get the nutritional analysis. We don’t have all that work done for these items like we would for our regular menu items; instead, we just run them a few times and then if we find that they’re popular, then we put them into the food production system and then you’ll be able to get all the nutritional information.”

And keeping her young customers coming back is what it’s all about.

“Generation Z spends a lot of money on food. but if you want them eating with you, you have to make sure you have a lot of fun new options,” Emery notes. “There are a lot more foodies now, even more than there were five years ago.”

Those foodies also want convenience, not just menu excitement, which is where the mobile ordering and food delivery programs BCDS has developed come in.

“We’ve had mobile ordering for a couple years now,” Emery says. “We partnered with GET Food and our POS vendor and tested it last year at a couple of popular locations, then expanded it this year.”

The service was launched at BCDS’s popular Hillside Café location.

“We find that we get quite a few people ordering from their residence hall in the morning and then stopping in to pick up whatever it is they ordered—a Starbucks coffee, a smoothie, an egg sandwich—and grab it on the way to class,” Emery says. “We do have a large number ordering for breakfast [from Hillside]. It’s open Monday through Friday for breakfast, lunch and dinner, and is still our most popular location.”

But it’s not the only one with mobile ordering and delivery, as those services are also available now at the CoRo (College Road) Café & Market location, while mobile ordering without delivery for a portion of their menus is offered at three other fairly large outlets—the Loft, Café 129 and Legal Grounds.

“We haven’t expanded some of the larger locations to delivery yet because we want to get the mobile ordering up and going first,” Emery explains. Delivery is done by a student-run business with which BCDS is partnering.

She expects delivery to expand primarily in the late-night hours as the service from Hillside and CoRo is already most popular later in the day.

“The counts are not as high as we expected it would be, but with the cold weather coming I think it will pick up more,” Emery suggests. “We did have it available at Hillside in the spring semester, which started in January, but that’s not open on weekends, so now we’ll have it available seven days a week and we expect it will be popular.”

Sales are up at both Hillside and CoRo so far this year, though a significant renovation over the summer has probably contributed to CoRo’s counts. At Hillside, which is the most popular unit for mobile orders, they represent about a fifth of overall transactions, Emery estimates.

CoRo’s renovation turned what was basically a mini-mart into more of a combination retail market/coffee shop, carrying an inventory of “maybe the top 50 mini-mart/c-store items,” per Emery, combined with a foodservice section offering flatbread pizzas, housemade bakery items and specialty drinks such as nitro coffee and kombucha on tap.

“We’d done some benchmarking at some of our retail locations, especially pizza, and then tried to come up with a twist on it,” Emery remarks, adding that menu ideas have also come from constant scrutiny of quick-serve restaurants in the Boston area.

The layout was also revamped, opening up what had been an enclosed space with windows and adding more contemporary seating and laptop outlets, “so it is much more like a coffee house,” Emery says. “The whole vision was to make it offer more than just convenience items, to have a space in which we can work with the campus activities programming board on holding events like poetry readings and acoustic guitar concerts.”

As at many campuses, sustainability has been a big focus recently at Boston College, with the school, in conjunction with Harvard and Tufts University, being awarded the New England Food Vision Prize from the Henry P. Kendall Foundation, which brings a three-year $400,000 grant to facilitate procurement relations with local growers.

“With this grant, we were able to hire a sustainability manager and have really been pushing sustainability in all areas,” Emery offers. “We have this wonderful showcase kitchen at a location we call FRESH [Fairly Traded, Regional, Ethnic, Sustainable, Healthy] to Table where we do demos every Wednesday night featuring ingredients that cover at least two of those letters.”

A big recent push involved local and sustainable seafood. To facilitate that, culinary teams from the department’s three main locations were challenged in a competition last August to come up with dishes featuring redfish, an underutilized local species.

To keep things interesting for students, BCDS holds a variety of special events, such as a dessert extravaganza during the fall midterms at the school’s popular Chocolate Bar venue or a Sunday brunch complete with a student jazz band.

“We had a really fun one last spring that was completely vegan, but which we didn’t advertise as vegan,” Emery says. “They’re usually a surprise and we don’t say in advance what menu will be, then text or email the location. They give us an opportunity to be really creative with menu.”