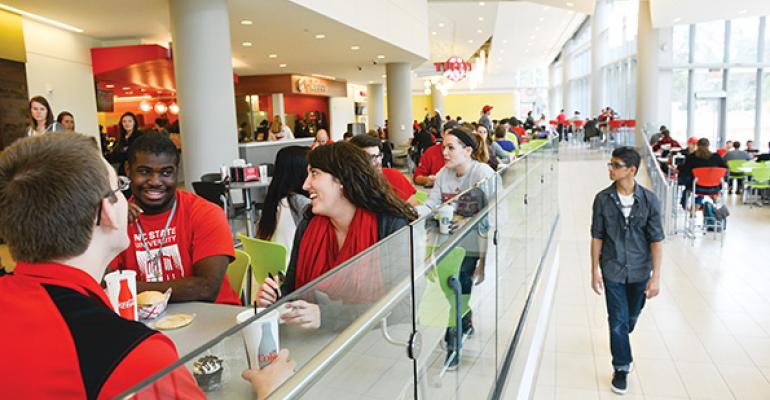 <p>LET THERE BE LIGHT: The renovated Talley Student Union has a bright, airy ambience thanks to plenty of natural light.</p>
Onsite leaders>FM Innovators

Two major new retail venues, one on each side of campus, highlight North Carolina State&rsquo;s commitment to campus community and dining quality.

Two major new retail venues, one on each side of campus, highlight North Carolina State’s commitment to campus community and dining quality.

On one end of North Carolina State University’s campus in Raleigh, professionally attired government and business people find culinary commonality with students in shorts and tees; on the other end, hungry students from all parts of campus meet to dine in the university’s most natural common space, the student union building.

Both of these retail dining venues—On the Oval on NC State’s Centennial Campus and the Talley Student Union on the main campus—are less than two years old. One is a total renovation of a previous dining venue (Talley), and the other is a whole new construct from the ground up (On the Oval). Both signify that NC State is serious about the quality it offers in its campus dining program and about dining’s role as a builder of campus community. 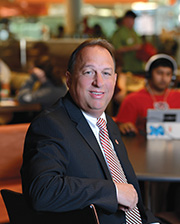 On the Oval serves a part of campus where a major new residential complex opened two years ago, a space that needed a common gathering place for a population that consists not just of students but also businessmen and government officials who work in the buildings there.

“Previously, the union had a couple of national brands and while we were successful with them, we felt like this was an opportunity for us to raise the level of food we were doing to be more than just fast food,” says Randy Lait, senior director of hospitality services at NC State. “My boss [Associate Vice Chancellor for Campus Enterprises Dr. Dan Adams] says that the student union makes a statement about a university’s commitment to its students, and that’s what we focused on with the renovation.”

No Greasy Kid Stuff Here
On the Oval fills the need for foodservice in the school’s Centennial Campus, located about a mile from the main campus, where the population is not your typical college crowd. Centennial is composed of a mix of NC State undergraduate and graduate academic buildings with private and government buildings, plus the new and ultra high-tech James B. Hunt library, where a bookBot robotic storage and retrieval system holds and dispenses up to 2 million volumes in a ninth of the space of a conventional library.

Centennial was originally developed in the 1980s, “but we didn’t really have residential out there, or any foodservice,” explains Lait, who has literally spent a lifetime at the university, first as student and then 31 years with the campus dining team. He notes that the area was prioritized for the school’s lauded engineering program, “and no one wanted to give up any space for foodservice.”

That was fine until the campus housing department decided to build what would eventually become the 1,150-bed Wolf Ridge Apartments residential complex on the Centennial Campus. Suddenly, there would be students at Centennial around the clock. Obviously, that would require some sort of foodservice option in the area, as the dining venues on the other side of campus are an inconvenient distance away. 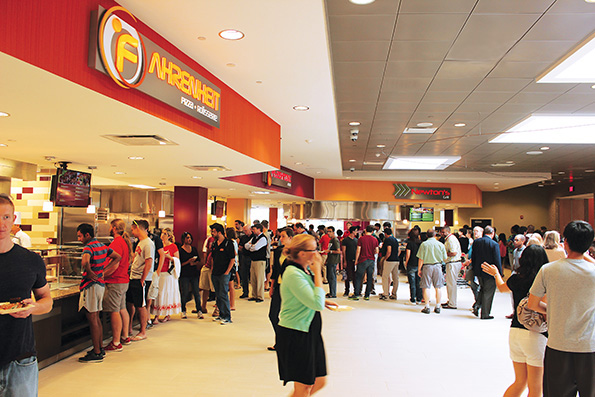 Lait, however, got a bit more than he might have expected.

“We were able to get about 20,000 square feet in that project to build On the Oval,” he recalls. It was prime real estate, right on the open, grassy area (the Oval) at the center of the Centennial Campus and conveniently near just about everything, from the apartment complex and library to the academic buildings and private/government offices.

Undoubtedly, the decision to allocate such a considerable amount of space and resources for a first-time dining venue at Centennial was also driven by the growing recognition that the mixed-use area, so diverse in population makeup, was also culturally fragmented and it needed some place everyone could go comfortably. “There really wasn’t any common space on that campus,” Lait explains. “For example, if you’re from the North Carolina Wildlife Commission, you don’t really have a reason to be over in engineering, and if you are in engineering, you don’t have a reason to be in the textiles building, but foodservice is a common space that everybody can go to.”

Lait says it was important that the dining venue not be a place “where a 55-year-old guy would just feel surrounded by students in their pajamas.” It had to be a common space “upscale enough for those suits-and-ties, while still giving the students the burgers and pizza they want.”

“We designed that space to not be a typical undergrad-looking dining facility,” Lait notes. “It really has a kind of modern urban restaurant kind of feel to it,” he says. “It’s a place where all those folks feel comfortable and it’s been very successful.”

The dining mix is composed of restaurant platforms where each has broad appeal rather than fragmented into concepts that target separate demographics. Yes, there’s pizza and burgers, but they are upscale versions with broad appeal.

“There’s a little variety of price point in each of those venues, but all the food is done at a nicer level than we were doing before,” Lait offers. “Also, we intentionally wanted to design these concepts in-house so we could be more flexible in updating menus and changing things, because it being the one major dining center on that side of campus you need to be able to change it up some so that people don’t become tired of it.”

On the Oval was first discussed about four years ago and opened in August 2013 concurrent with the debut of Wolf Ridge Apartments.

Then that October, the first phase of the renovation of Talley debuted with five dining concepts plus a c-store. The renovation of the complex, which involved much more than just the dining areas, represented a commitment on the part of the administration. In the words of Tim Hogan, director of University Student Centers, speaking at the 2013 Talley opening: “The vision of Talley Student Union is to reinvigorate the College Union idea at NC State.”

“The existing building had become quite tired and stale,” Lait admits. “Something had to be done.”

What was done was a multi-stage renovation process begun in 2011 that, as far as the dining component was concerned, allowed food to continue to be served while construction progressed (though it did close down for about six weeks at the start of the 2013-2014 school year). The last pieces—a Starbucks and the 1887 Bistro, an event space and gathering spot for game-viewing parties and after-theater dining—are slated to open this summer. 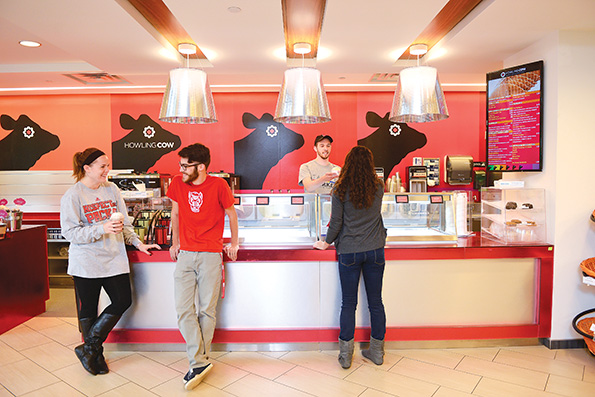 All of the concepts were developed in-house except Jason’s Deli, which is a small regional multiunit upscale deli concept. The Talley location is the first in a university setting. “It’s high quality, a little higher price point but well executed,” Lait comments, noting the chain’s reputation for serving healthful choices within a deli menu context.

Lait concedes that there is a definite place for recognized national commercial brands in a college concept mix—he’s about to put a Starbucks in Talley, after all, and there is also a Chick-fil-A unit in the Atrium food court. But the upscale profile conveyed by the new mix of in-house and local commercial concepts accords with the facility’s purpose as a premier space for forging campus community.

Quality and flexibility are among the factors that brought other emerging commercial restaurant concepts to campus. One is the Port City Java chain, which now has seven locations at N.C. State, including one at Talley. The chain not only features “fairganic” (organic, Fair Trade) coffees and teas but “they have an all-day menu that lets us serve coffee and muffins and breakfast sandwiches in the morning, a salad and sandwich program in the middle of the day, and smoothies, milkshakes and cookies in the afternoon. We brought them in because they were a good fit for some of the underserved parts of our campus. We could shoehorn them into a space that didn’t require a grease trap and a hood and serve a variety of things that fill a need.”

Port City was small enough that it was willing to work with the university on the menu, and some of the items were developed at NC State, whose kitchens make all the foods fresh each day.

Another new venue opened near the end of the spring 2015 term was Smoothie U. in the D.H. Hill Library. “We opened up in mid April and were doing $4,000 a day in smoothies,” Lait says proudly. “It was a space that had been a copy center that was moved into Talley; they left me just enough room to build a really cool smoothie shop.”

Cool smoothies and fairganic coffees are just a part of what has been an eventful period at N.C. State, one that Lait looks back on with some astonishment.

“If you take the five concepts in On the Oval, the new concepts in Talley and various other renovations around campus, we planned something like 14 menus and concepts and opened them up within 12 months.”