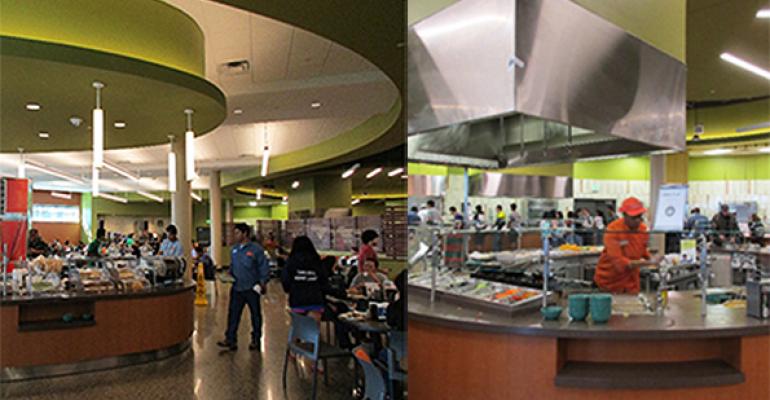 College Innovator of the Year: University of Texas at Dallas 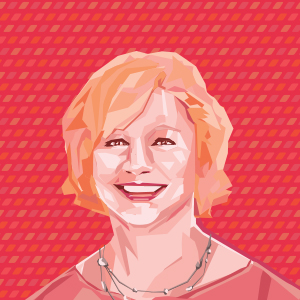 HEAD OF DINING: Carrie Chutes has direct oversight of retail and residential dining operations at UTD as assistant director of food

Quite a change in quite a short period of time.

The expansion of campus dining mirrors the school’s emphasis on growing its residential population. UTD’s first student resident hall, a 400-bed freshman facility, only opened in fall 2009, and four others have followed since, bringing the number of students currently living on campus to around 4,800 (the school’s full-time enrollment is around 24,000 of which 18,618 are full time). An 800-bed apartment complex is slated to open next year along with another 800-bed mixed-use facility just off campus, with more planned down the line.

Campus dining has tracked the growth of the number of students living on campus, with the first all-you-care-to-eat residential dining center opening in the student union complex concurrently with the first residence hall in 2009. That was also the time the university contracted with Chartwells to manage the growing campus dining operation, says Carrie Chutes Charley, who came to the school at that time to take on the newly created title of assistant director of food & retail services. 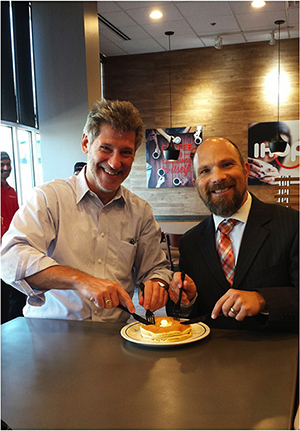 “They hadn’t had a dining hall before, didn’t even know what meal plans were or how to manage them,” she says. “Literally my first day on the job they had just broken ground on the student union dining hall. It was a really high point time for us as it was a very beautiful facility and a brand-new program.”

That original dining hall served the growing campus resident population over the next five years (UTD opened a new residence hall every year between 2009 and 2014).

Fall 2014 saw the debut of the brand-new LEED Silver certified Dining Hall West in the northwest corner of the campus, where many of the campus residences are located. Dining Hall West operated conjointly with the original residential dining facility over the 2014-2015 school year, both serving as all-you-care-to-eat facilities.

Then this past summer, the older dining center was converted into a retail food cluster featuring seven concepts, four of them new, plus an Outtakes c-store and a campus pub. It was part of a flurry of changes and upgrades to the campus dining program that also included two other new branded units, an IHOP Express and a Ben & Jerry’s.

“The development of our dining program was incremental up to this year, when it was rapid fire,” Chutes says. “We opened six new operations and completely redesigned the menu for our pub to make it more of a gastro pub with craft beers and gourmet burgers that really changed the feel. So that felt to us like a whole new operation as well.”

Perhaps just as significantly, that expanded range of retail options aligned with a new meal plan approach that offered a retail exchange option for the first time. 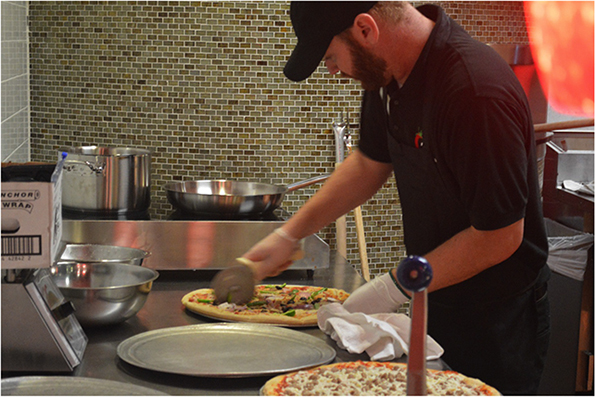 Now, UTD students on meal plans can dine at Dining Hall West with its seven food stations ranging from the vegetarian Beans and Greens and health-focused Balance Bowls to more traditional Wok, Pizzaria, Grill, Deli and Chef’s Skillet (entrée) stations, or they can exchange one meal swipe per day for a meal combo at one of the retail outlets.

“The meal exchange was a tremendous win,” says Robert Fishbein, associate vice president of auxiliary services, “because if you told the students that now to use that all-you-care-to-eat meal plan, you have to go all the way back to your res hall to participate, you would have had pushback.”

He credits Chartwells with smoothing the acceptance of such an exchange program by their commercial chain partners.

Fishbein also notes that the exchange program has resulted in a low “breakage” rate on meal plan usage, the incidence of students not using up swipes they have paid for and losing them, which is a common complaint on many campuses.

Typically, UTD resident students take breakfast and dinner at Dining Hall West, which is near their dorm rooms, and use the meal exchange option to get lunch at one of the retail outlets that are located near the academic buildings. The campus dining program generates around 50,000 transactions a week, of which 35,000 come at the retail venues.

One benefit of the meal exchange option is the impact it has had on breakfast and dinner counts. Unlike the original dining hall in the student union, which is located away from the residence halls, Dining Hall West is in the midst of them, and after it opened, “we saw our breakfast and dinner participation rise tremendously,” Fishbein says. “We always had a strong lunch but not a strong breakfast but now that they can fall out of bed and eat, they are, and that’s certainly helping our participation rate on the meal plans.”

In fact, for the year that both dining halls were operating, the original facility was closed for breakfast and dinner in recognition of the fact that most students wouldn’t be nearby during those times anyway.

The much more robust retail mix in place now is quite a leap from seven years ago, when the only retail dining on the UTD campus was at a three-concept cluster called the Comet Café in the student union that consisted of Subway, Chick-fil-A and Coyote Jack’s outlets. The Coyote Jack’s was replaced in 2011 by a Papa John’s unit that was subsequently moved to the facility where Dining Hall West is located. There, it along with an Outtakes c-store offers students a separate retail option from the dining hall.

“Having that Papa John’s right in the middle of the res halls has been a win,” offers Fishbein. “Our late-night activity there is tremendous, especially on sports nights.”

Making the most of parking, more

Another notable retail area is located in a parking structure.

Many schools talk about putting retail outlets in parking venues, but few have succeeded to the extent UTD has at its Parking Structure 3 location, where the Einstein Brothers Bagels that opened a year ago was bolstered this fall by the addition of an IHOP Express unit. The two together have been generating around 4,500 transactions a week in the current school year. It helps that they are not simply grab-and-run outlets, though many customers undoubtedly only stop to get something before hurrying to a class.

Nevertheless, the venue has substantial space for those wishing to linger, with seating for up to 140, about half of that outside on a patio, and that has helped grow business.

“The two venues there have very deep sidewalks and we utilize them for seating,” Fishbein explains. “It was designed with that in mind. We knew we needed deep sidewalks for that purpose, to make it a patio.”

“Of course, it also takes advantage of being in Texas and the warmer weather,” Chutes adds.

She also notes that the IHOP Express unit, which stays open until 1 a.m., gives the campus another late-night option along with Papa John’s and Outtakes.

The Einstein/IHOP mini-cluster is also located near the campus perimeter, and as awareness of their presence has grown in the surrounding community, the school has reached out to nearby organizations like running and biking groups, churches and similar entities, which has helped build weekend business, a traditionally slow time for venues that rely on commuters. Currently, only the IHOP has weekend hours, but Fishbein says if Saturday and Sunday business continues to grow, the Einstein may also open up as well.

The parking structure outlets, as well as a number of other retail locations scattered across campus help spread out business and streamline operations.

“If everyone ended up at the retail food court at the same time, it would choke you,” Fishbein offers. He illustrates this by pointing to the operations at the School of Management building at the campus’ southeastern corner.

“That has a Jason’s Deli and it also has one of our very successful coffee shops,” he adds. “We were concerned putting in Jason’s Deli that it would cannibalize our coffee shop and we were quite surprised to see it was all incremental business. The coffee shop went up in revenue and so did Jason’s Deli. That has been a happy surprise.”

The retail brand mix was the result of a four-year process that Chutes compares to a chess game (chess is a big deal at UTD, where the chess team has won a number of national and international titles) in terms of finding the correct combination of national and proprietary concepts.

The fact that almost a quarter of the student population is international has certainly impacted the dining mix. “We have a large contingent of Indian students and so we have been emphasizing vegan and vegetarian since 2009 when the first dining hall opened. But our culinary talent has also grown,” Chutes explains. “We have a chef from the CIA and our executive chef is from the local culinary institute and they’re constantly looking at ways to enhance our program.”

Of course, this is Texas, and one of the most popular programs put on by the dining department is weekly Al Fresco Days, which is a barbecue on the patio in front of the dining hall with a barbecue item of the day, such as burgers to chicken and smoked turkey.

The retail venues also bolster campus catering, as users can choose to cater through a name brand like Subway, Papa John’s or Einstein Brothers. “It allows people on all different levels of budget to participate in a catered event,” Fishbein says.

He adds that catering revenues currently run around $1.5 million annually and are growing. The department is also in the process of adding small catering kitchens at strategic spots around campus to facilitate service.

“Traditionally, a campus will have one catering kitchen and they will commute that product back and forth,” Fishbein explains. “We are trying to find out where these hot spots are. We know, for example, that the alumni center we’re building is going to have a lot of catering and we know our School of Management does a lot of catering, so we are now strategically putting catering finishing kitchens in these locations so that the food we are putting out is of quality and hasn’t been sitting in a truck for 20 minutes traveling across campus.”

Catering is also bolstered by a couple of mobile eateries, the department’s food truck and its burrito cart, both of which are available for rental in addition to serving as additional retail food outlets.

The truck regularly changes concepts and names. Currently, it is called Made to Melt and offers a gourmet grilled cheese menu, but over the winter it will convert to a more seasonal theme such as soups and sandwiches.