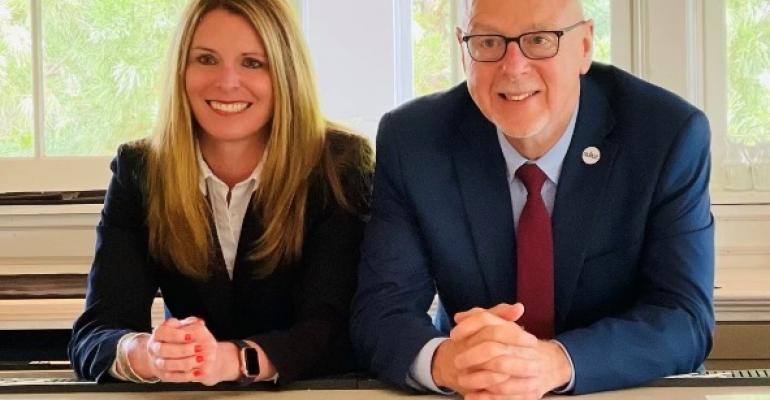 Mitch Possinger is one of the senior dining market’s most experienced figures.
Onsite leaders>FM Innovators

Mitch Possinger is one of the senior dining market’s most experienced figures. The former Aramark and Wood Co. executive founded senior dining/acute care specialty firm Cura Hospitality in 1996, growing it into a major FM Top 50 contract company before it was acquired by Elior North America in 2015. Possinger stayed on for a couple years following that merger, then retired when he hit 65 but found he didn’t like the inactivity despite the occasional consulting gig.

So last year Possinger re-entered the field with a new concern, Culinesse LLC, with some major league investor backing from former leaders of Compass Group, current leaders of Elior and Eat'n Park Hospitality Group (of which Cura was a division before its acquisition by Elior) and hotel/resort/restaurant firm Settlers Hospitality Group. His co-founding partner is Lisa Schairer, also a veteran of the healthcare food and nutritional services market who had most recently served as Cura president and managing director.

However, despite the investor titles and Elior’s taking an investment position in the new firm, Culinesse is an independent company, Possinger stresses, with a goal to zero in on the needs and dining service requirements of the fast-growing Life Plan Community segment of the senior dining market, especially its re-opening and positioning for a post-COVID world. Industry analysis indicates robust growth in Life Plan Communities (sometimes also called CCRCs), fed by affluent retiring baby boomers (though recent economic developments may curtail that somewhat) and a need for communities competing for residents to differentiate themselves with various forms of high-end service, especially on the dining end.

Opportunities in a significant market

To date, Culinesse has secured contracts with five free-standing, formerly self-operated not-for-profit Life Plan Communities in Pennsylvania and the Carolinas and is looking for more in the broad Mid-Atlantic region. Possinger notes that there some 200 CCRCs in Pennsylvania and 125 in the Carolinas plus a couple hundred more scattered around Virginia, New Jersey, Southern New York and Southern Connecticut. That gives the company a broad field of potential clients, most within a day’s car ride from either Possinger in Eastern Pennsylvania or Schairer, who is stationed in Charlotte, N.C., so one of the senior partners can be at a location quickly to address any issues personally.

In addition to that personal touch, what Culinesse offers is a renovation, refreshment and expansion of the dining services at its client locations, and opportunities for rewarding, well-compensated and career-advancing work for associates.

“The opportunity we saw was that there really is no smaller boutique player in the CCRC market, of which there are about 2,400 in the United States—about 80% not-for-profit and about half self-op—so we thought there was a niche opportunity here,” Possinger explains about Culinesse’s business strategy. As early evidence that the company is on to something, he cites the fact that the CEOs of several early clients said they declined issuing general RFPs for dining services because they regard Culinesse as “a unique player” that can design a program specifically for their needs.

The client sites tend to have between 300 and 1,000 residents, most in independent living units, “so a huge part of what they do is all about hospitality—high-end hospitality—while also having the healthcare component at the other end that is much more clinically oriented and regulated,” Possinger says. “It’s highly relationship-driven because unlike markets like higher education or corporate dining, your guest will live there 12-15 years, so they become like extended family. Because every community has different demographics, we operate them like independent restaurants, not cookie-cutter chains.”

Culinesse not only works with each community on menus and concepts but with local supply sources and restaurants.

“The big guys want to get 80-85% of what they spend on the big truck from a US Foods or Sysco, while we average 50 to 60-65% on the big truck [and have] fresh local meats and seafoods, produce and dairy,” he notes

The individualization also extends to the kinds of dining outlets communities prefer. Possinger says that when he started in the business, the typical CCRC had one main dining room with hundreds of seats and one minimal snack bar or grill room with a couple dozen seats. Over the intervening years, that has changed, he notes.

“The residents now want more options and they want more casual, so a classic CCRC now will have a fine dining venue that’s smaller, with maybe 50-75 seats and reservation only in many cases, and then an upscale casual option. Many of our communities now also have a fast casual concept, almost like an upscale Panera, where you can order at the counter or with a touch-screen, and then we bring the food to your table. Many also have full liquor licenses now with full-bottle bars, so they’re not just wine-and-beer places.”

He notes that the bars in all five of Culinesse’s client sites are high-end hotel-style bars with premium choices and usually small-plate or pub menus with offerings like burgers, wraps and salads.

“The big trend there now is to take the food production, the cooking, into the healthcare areas with Rational ovens and built-in induction cookers,” Possinger relates. “Most of the food preparation is done in the dining room for 15-20 residents at a time, so they are small, intimate areas.”

Like many other operators across the various onsite markets, Possinger notes the pandemic’s impact on accelerating pre-existing trends toward greater use of technologies like remote ordering, even in senior communities with stereotypically less tech-savvy populations, where residents now increasingly use mobile platforms to order takeout or delivered meals.

“A lot of CCRCs during the pandemic made sure their residents had iPads if they didn’t already have some online device so they could order food,” he notes.

Meanwhile, especially in fast casual outlets, touchscreen—as opposed to counter—ordering has proliferated. At one of the company’s units, up to 70% of customers at the community’s fast casual outlet reportedly are using a remote order option that had only been introduced about a month earlier.

The acceptance of remote or touchscreen ordering seems confined to fast casual venues, Possinger adds. “Upscale casual and fine dining venues I think will always be person-to-person table service because, frankly, that’s why they’re going there.”

Another legacy of the pandemic experience seems to be a lingering preference for the at-home meal service that had been implemented in most communities while residents were locked down. Possinger says his clients are reporting that 25-30% of independent living residents continue to prefer takeout or delivery for their dinner meals.

Culinesse is encouraging these residents to forego delivery and come and get their pre-ordered meal with convenient pickup options, even if then take the food back to their residences, because that at least gets them out of their homes, something research has found is important for senior health and well-being. Fortunately, that seems to be the preferred option of getting meals to be consumed in residences, Possinger observes.

“What’s interesting about takeout is that while a lot of the residents order food to be consumed in, they still feel like they are part of the process if they have to walk down to the restaurant and pick it up the food,” he adds.

It’s a delicate balancing act, however.

“We trying to not encourage but not discourage delivery,” he diplomatically says, partly by charging delivery fees that can cover the cost of the labor needed while being just high enough—anywhere from $5 to as much as $12—to have an impact.

Meanwhile, pickup has advantages for operators as well as customers and should be encouraged, he says.

“As an industry, we need to do a better job at [promoting] takeout by looking at the menu and the package because it’s a lot easier for us to do takeout than it is to find a server for every 16 guests at a table.”

Speaking of labor, Culinesse like every other service provider currently must compete in a seller’s market for employees. Possinger says the issue is not so much on the chef/manager end, where the company currently is able to attract a sufficient number of mid-career veterans looking for a less hectic environment than that offered by commercial entities like restaurants and hotels.

It is on the staff end that Culinesse is innovating to attract talent, in part by reviving some traditional kitchen hierarchy titles and trying to develop career ladders.

“Instead of calling them line cooks or prep cooks or cold prep, why not use traditional cook and chef titles like pastry chef, sous chef, executive sous, chef de cuisine and executive chef and put together career ladders in the kitchen,” Possinger asks. “If we’re going to be increasing wages [in response to the current labor market], why don’t we look at all the titles and job descriptions and put together career ladders in the kitchen so it’s more appealing for folks to come work with us?”

The company is working with the Pineapple Academy to put together certification programs to help back-of-the-house employees build their careers if they wish.

Meanwhile, in the front of the house, with dinnertime being the peak daypart in senior living, “we’re in a great spot for part-time, four-hour servers—high school and college students and others who want to work that 4-8 p.m. period,” Possinger observes. While during the pandemic, the few venues still open had a rough go at finding staff, and even now there are lingering issues with vaccination status—most CCRCs require all staff to be fully vaccinated—Culinesse is seeing applications and hires for front-of-the-house positions trending up with the use of online services like Indeed.

“We now have CCRCs where the starting wage for a part-time server is $18-$20, which is a pretty good deal for a part time job for high school and college students,” Possinger notes. “It wasn’t too long ago that they were getting $8-$9.”

That’s a steep increase that not all operations can afford, so some are resorting to service charges for full table service, with the money allocated exclusively to the server. “It’s a way of competing against restaurants that pay tips,” he says.

Being attractive to potential employees, especially those with skills, ambition and a desire to work in senior living environments is critical to Culinesse delivering on its mission to be a different and unique kind of dining services provider to Life Plan Communities, a “boutique” option that provides high end, individualized service to clients and rewarding opportunities for its associates.

“The whole boutique thing is about personal relationships, customizing, not cookie-cutter,” Possinger says. “Our kitchens are studios, not food factories, our people are people, not numbers, and to our clients we’re trusted advisors and not just a vendor or supplier.”

As a tangible example, he notes that on invoices, clients are identified by name, not a number.

“We want to know people by their name, not a number and feel like we’re making a difference in the lives of the residents and their families, and also help employees improve their lives.”