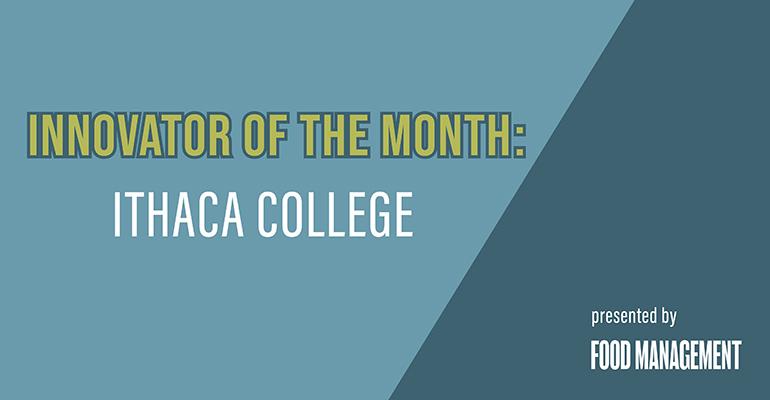 After 19 years of contract operation, this 6,500-student private school is now managing its own foodservice, reaping the benefits while meeting the challenges.

After 19 years of having its dining program operated by an outside company (Sodexo), the administration at Ithaca College in upstate New York decided they wanted to go it alone. So, starting this fall, management of the school’s various foodservice venues has fallen to Ithaca College employees. Ithaca College has an enrollment of about 6,500, of which about 4,100 live on campus in dorms or apartments.

Among major changes in the program have been the conversion of one of the three residential all-you-care-to-eat (AYCTE) dining centers into a retail food court, the reduction of meal plan options from nine to a less expensive two and the forging of more partnerships with local vendors and restaurant concepts. 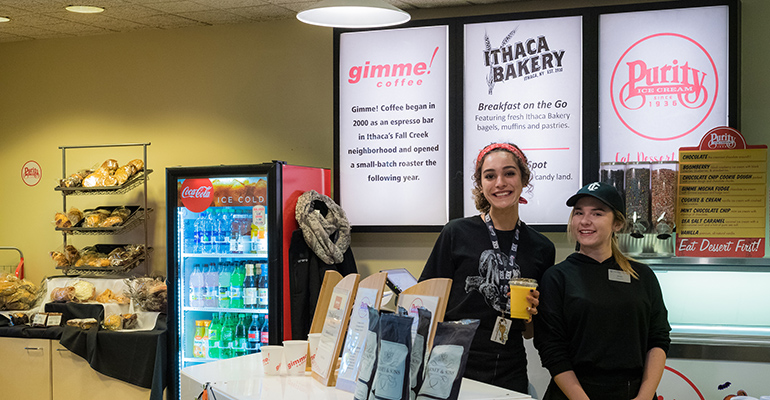 Locally based Ithaca Bakery was chosen instead of national brands like Starbucks or Einstein Bagels, because it resonates better with the community, says the college’s Finance/Administration VP, William Guerrero.

Ithaca College had been paying a fee to Sodexo to manage its dining, but the school wanted to explore the possibilities of a P&L approach through which it could potentially grow revenue, control expenses and reap any benefits without having to pay a management company, says William Guerrero, vice president of finance & administration.

“We now have the flexibility to be very, very liberal, as opposed to a food contractor [with which] you have to go through numerous iterations of negotiations to change things,” he notes. “Now, we’re really nimble.”

The conversion to self-op meant that the dining staff, who had worked for Sodexo, would technically be out of a job, but Guerrero says one of the priorities once the break came was to ensure that every Sodexo employee who wanted to return would get a job as an Ithaca College employee. 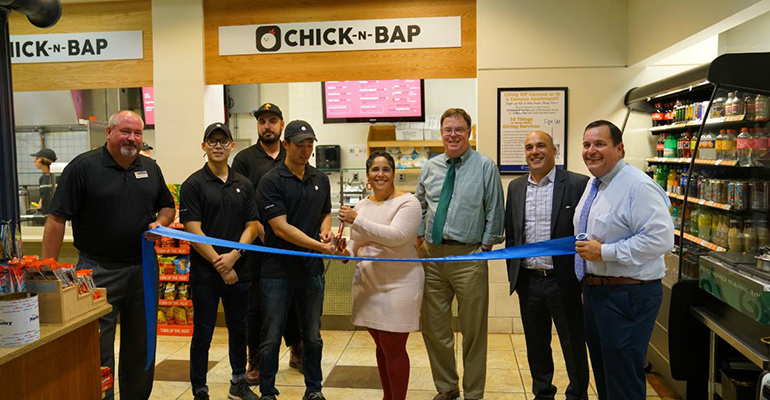 Chick-n-Bap, a Korean concept not based nearby but popular with Ithaca College students, was one of the new concept additions.

“We wanted to guarantee a job for everyone who worked here with Sodexo, which was about 120 employees, and make them part of the college family,” he explains.

Among the first changes was to switch the primary vendor relationship from the national firm Sysco to the more local Maines Paper & Food Service, which is based in nearby Conklin, N.Y. and which could facilitate more local sourcing.

“Another reason [we felt we could go self-op] was the synergy we could have with Cornell and other local partners,” Guerrero adds, noting that “when we made the announcement [about going self-op], Dustin [Cutler, Cornell’s director of dining] reached out to me and asked, ‘How can we help you?’ He said he appreciated the off-the-beaten-path approach of going self-op, and they have been absolutely amazing with [sharing] best practices, training, menu management—really, really good partners for the community and the college.”

The intercollegiate partnership brought Cornell staff over to Ithaca College to offer advice and training, while Ithaca College staff travelled over to Cornell to see how their operations worked and what practices they might be able to adapt for their own use. 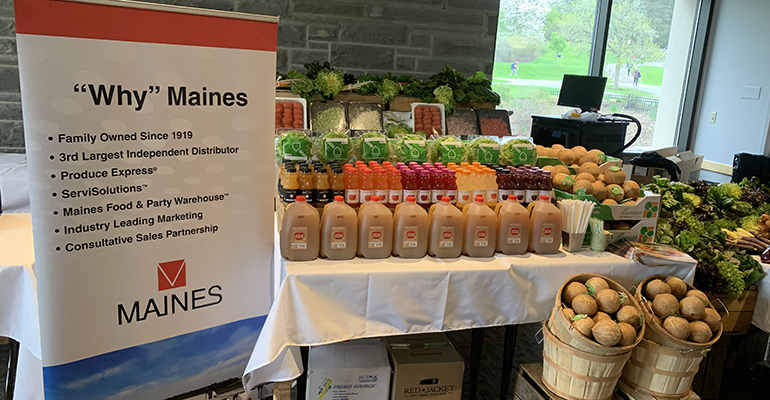 Among the first changes was switching the primary vendor from national firm Sysco to the more local Maines Paper & Food Service, based in nearby Conklin.

The new local emphasis also extended to welcoming local restaurant concepts onto campus to replace Sodexo brands through license deals that allow the campus units to be staffed by Ithaca College employees.

“Instead of having your national brands like a Starbucks or Einstein Bagels, we went with local that resonates with the community and the students,” Guerrero says. Currently, they include area favorites like Ithaca Bakery, Ithaca Coffee Co., Gimme! Coffee and Purity Ice Cream, as well as a Korean concept called Chick-n-Bap that is not based nearby but has a strong presence in the community and is popular with Ithaca College students. 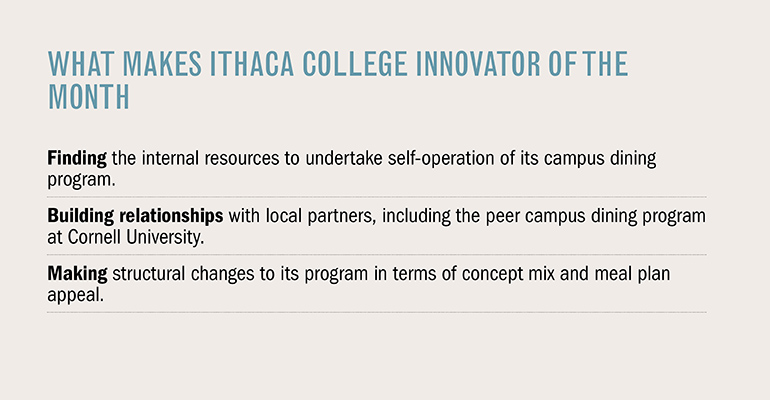 Two of the concepts—Purity Coffee and Ithaca Bakery—now have outlets in the new Towers Marketplace retail food court, which sits in the space formerly occupied by the AYCTE-style Towers Dining Hall. Guerrero says the conversion was made because Towers sits close to another AYCTE venue that offers more choices, so it regularly underperformed, consistently ranking last in traffic among the three campus AYCTE venues. The hope, he says, is that the retail approach will attract more customers to the venue by offering an alternative.

The meal plan strategy has also changed, with only two choices rather than the multiplicity available before. One is an unlimited plan that is mandatory for students living in the on-campus dorms. It comes with 230 Bomber Bucks that can be spent at retail outlets, while the other one is a five-meals-per-week plan with 600 Bomber Bucks that is an option for off-campus students and those living in on-campus apartments who are not required to purchase a meal plan.

Two goals of the new approach were affordability and addressing food insecurity, so the new plans are less expensive than their equivalents from the previous year, Guerrero stresses, adding that better affordability and more desirable choices hopefully will in turn also increase meal plan sales, and hence program revenues.

“The idea is that, ultimately, we’re providing a program that everybody wants to be part of,” he says, adding that it is too early in the process to make evaluations. However, he does note that student feedback has overall been “very, very positive” even in the face of challenges such as occasionally longer serving lines necessitated by more fresh prep and meal customization. 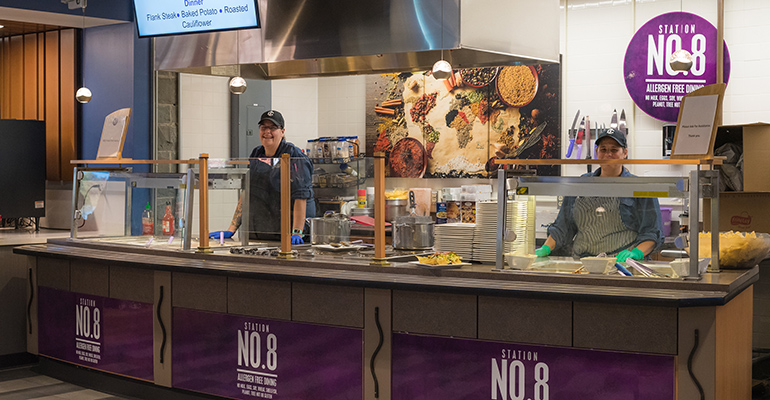 So, would he recommend the self-op approach to other institutions currently contracting out their dining?

“At the end of the day, it’s a very difficult process,” Guerrero admits. “You have to know if you have the core competencies, the expertise at your school” to manage the dining program. “I personally have over 20 years of experience in overseeing the food contract and without that type of experience it would be very difficult to make that [step].”