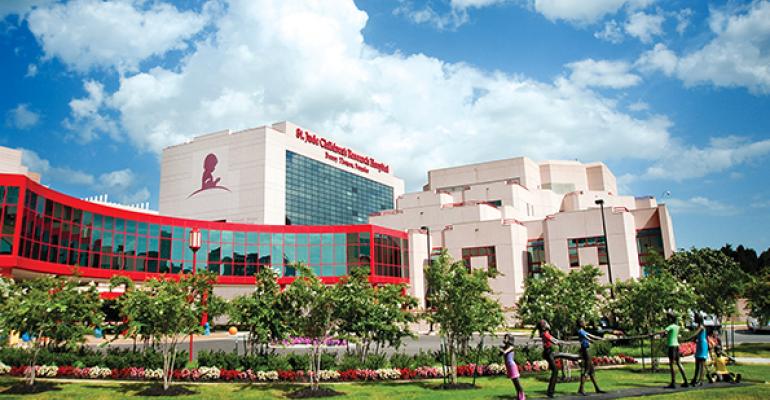 <p>ALL THE WAY TO MEMPHIS: Entertainer Danny Thomas founded St. Jude Children&rsquo;s Research Hospital in 1962 as a place where sick children from across the country and around the world can get the treatment they need free of charge. Today it is one of the world&rsquo;s leading research centers for developing cures for childhood diseases.</p>
Onsite leaders>FM Innovators

If a sick child wants basbousa, she gets it. Same for molokhia or “black chicken.”

These are all examples of exotic meal requests that the staff and kitchen at St. Jude Children’s Research Hospital have been able to accommodate for the young patients at the world-renowned pediatric institution in Memphis, Tenn.

It’s just part of the philosophy that makes satisfying the hospital’s young patients the absolute priority for the dining department.

St. Jude operates an all-day room service patient dining program at the hospital, which averages 150 to 200 patient meals a day. It also satellites meals, on request, to a pair of off-site facilities and about one hundred people each day at an onsite day care center. 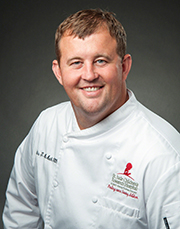 A SENSE OF MISSION: Miles McMath left a highly successful commercial restaurant career to head up dining at St. Jude.

On the retail side, the hospital’s Kay Kafe serves up to 3,000 meals a day to a staff of almost 4,000, plus visitors, from a parade of food stations that cover the gamut of popular cuisines from deli and pizza to ethnic and homestyle entrées and even freshly rolled sushi.

Overseeing all of this is Miles McMath, CEC, CDM, a successful veteran commercial restaurateur and multiple ACF Gold Award winner, who took over direction of dining operations at St. Jude in 2008, when the medical center decided to self-operate the previously outsourced department.

In the six-plus years since, McMath has overseen a complete reinvention of dining at St. Jude. That transformation includes the move to room service dining for the patients, the upgrade of the retail offerings, an emphasis on scratch cooking by a skilled culinary staff (St. Jude now employs five Certified Executive Chefs in its dining operations, the most of any employer in Memphis) using high-quality ingredients like grass-fed beef, heritage breed pork and produce fresh from the hospital’s own onsite garden (see more >>).

Celebrity Chef
When McMath came to St. Jude, the hospital had just embarked on a major renovation of its primary retail dining facility, the Kay Kafe, which quadrupled its size and opened up the stations to provide more display cooking. 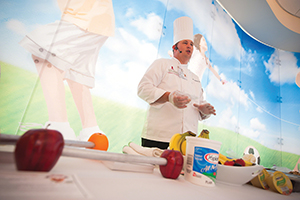 VETERAN SHOWMAN: McMath recorded over a hundred TV cooking episodes for a local station, so presenting before an audience is no big deal. Photo: Seth Dixson

Besides Kay Kafe, a rotation of locally operated food trucks provide an onsite dining option for staff located at the more remote fringes of the campus.

Because of St. Jude’s highly diverse staff, the retail operation must offer a wide range of cuisines. Special events centered on various cultural holidays are frequent.

One corner of Kay Kafe, named the Kids Corner, is dedicated to inpatients, where a child can come down any time to make pizza and other kid-friendly concoctions with the help of a staff chef. This helps break the monotony of a hospital stay and sometimes even serves to spur a child to eat. 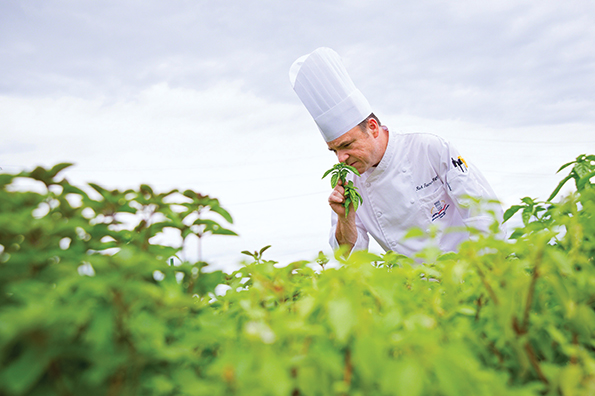 DOWN AND DIRTY: St. Jude chefs, like Rick Farmer, have their own garden to draw fresh produce ingredients from. Photo: Justin Veneman

McMath relates one incident in which a little girl suffering from a loss of appetite nevertheless wanted to come down to make a special pizza for her mother, but then, “I saw she started nibbling on it herself, too,” he says.

“I got the idea from having kids of my own,” McMath says.

“I found that if you can get them to participate, they’re more likely to try it.”

St. Jude is licensed for 80 beds at its main campus, with an average daily census of around 48. The numbers sound small but reflect the hospital’s emphasis on outpatient care (though St. Jude did reveal in April that it is drafting a new six-year strategic plan that reportedly includes an expansion of inpatient facilities).

Hence, the inpatients are those with significant health issues, facing major surgery or extensive chemotherapy. But sick children often have little or no appetite even though they have to eat to keep their strength up for treatment.

“Our view is, if they want Pop Tarts or chicken nuggets, that’s what they’ll get,” McMath says. “Yes, we prefer they eat healthy, but the main thing is that they eat.”

That philosophy is reflected in the room service approach that says patients can get whatever they want (within clinical dietary restrictions) when they want it, even if it’s something highly unusual. 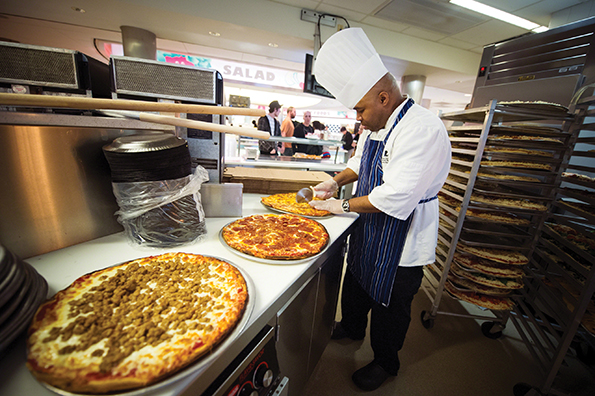 “We had one child from China who wanted black chicken with azuki beans cooked in an enamel pot,” McMath recalls. The beans were fairly easily sourced because the hospital already does a lot with legumes and heritage grains, but the chicken at first posed a problem. Getting authentic black chicken through standard procurement channels was possible but would take time. However, some research showed that black chicken is actually a breed of fowl (a Silkie), which several area farmers raised. 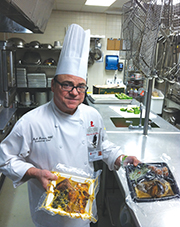 NO AIR IN THERE: Executive Chef Rick Farmer, CEC, with two vacuum-sealed entrÃ©es being considered for off-hours and home meal replacement use. Photo: Michael Buzalka

McMath says he only draws the line at parents trying to take over. “One lady from India wanted to cook a meal for her child herself in our kitchen,”McMath recalls. “We convinced her we could do it and would work off her recipe.”

Proteins for patient dining are carefully sourced premium products: pork is from hogs raised within 300 miles, the beef is all grass-fed (some from a nearby ranch) and the chickens are all pastured.

“We have kids with compromised immune systems, so I want it to be as safe as possible,” McMath says. He uses grass-fed beef, for example, because it has a statistically lower incidence of E. coli contamination than standard product. (McMath is quick to add that as a chef he has no quibbles with standard beef purely as an ingredient).

This dependence on premium products for patient meals is balanced by purchasing underutilized cuts and even whole carcasses for retail use that the staff’s culinary expertise can turn into desirable dishes (slow braising chuck roast, for example, to produce tender end products). There’s even a charcuterie operation headed by Executive Chef Rick Farmer that utilizes a lot of the otherwise unusable nose-to-tail items off whole carcasses.

While the patient dining operation tries to accommodate special requests, most orders are still fairly standard menu items that must be as germ-free—in other words, as fresh—as possible.

“For a healthy person, eating yesterday’s pasta is no big deal, but for an immune-compromised kid it is since germs grow on food over time,” McMath explains. But making individual portions to order is operationally untenable.

The solution: bulk production of complex dishes using cook-chill processes that are then vacuum sealed by portion and quick frozen to retard bacteria growth. They are then rethermed as needed, giving the room service operation a readily accessible inventory of ready-made dishes.

The process can also produce a child’s favorite recipe so it can be served on multiple occasions—even over months if the child has to come back to the hospital multiple times—and always taste the same.

St. Jude’s  onsite garden is actually more of a mini farm as it covers well over an acre. It includes 60 4-by-8-foot raised beds and two 24-by-40-foot hoop houses that produce organically grown crops (no artificial fertilizers or pesticides are used). It is also a major composting operation that even uses earthworms to break down organic scrap and turn it into rich soil, a process called vermiculture.

Located alongside the seedbeds and hoop houses is a building covering some 4,000 square feet in which seed culturing, composting and vermiculture takes place. The composting and vermiculture processes are supplied by the hospital’s unused vegetable scraps, of which it has more than the average because the hospital buys a lot of local unprocessed crops that it trims itself.

Most of the excess food that can’t be composted is either donated to a local shelter through the Food Donation Connection (FDC) or winds up as animal feed. McMath raises hogs and says they love the leftover sushi from Kay Café.

The farm itself is run on a very cost-effective basis with volunteers doing much of the work.

“It’s not a kid’s garden,” McMath emphasizes. “It’s an actual working urban farm.”
Last year, the farm produced over 500 pounds of potatoes, 300 pounds of white onions, “all the tomatoes we could actually use,” McMath says. Most of the product is channeled into patient meals because of the need to emphasize the freshest possible ingredients there.

Seed procurement depends in part on relationships with local farmers with whom the hospital also has purchasing relationships.

“For example,” McMath explains, “farmers will have overruns every year when they plant. Maybe they plant 10,000 onion snips but have 300 left over. Well, we’ll take that 300 and plant them. Our whole concept is to grow what grows really well here, and we use a lot of.”