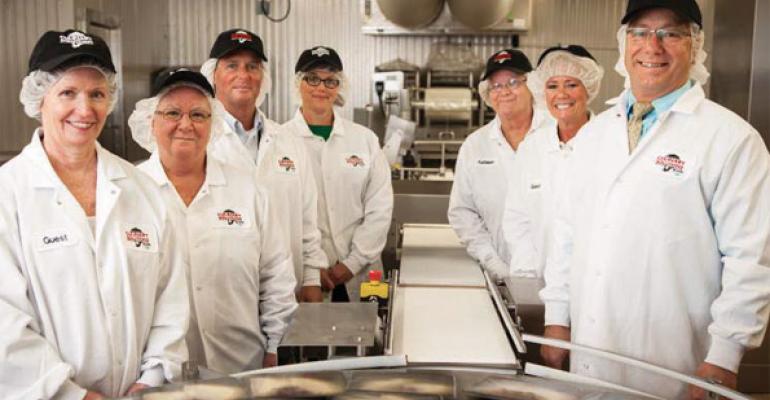 Lee Memorial Health System (LMHS) presents quite a meal production and distribution challenge. The fourth largest public health system in the U.S. with more than 10,000 employees and some 1,200 physicians, it is licensed for more than 1,600 beds across five acute care facilities and two specialty hospitals. The food and nutrition department serves more than five million meals annually.

Despite that volume demand, the meals served to patients and retail customers at LMHS sites are increasingly customized, appealing and health-focused thanks to efficiencies brought about by LMHS’ membership in a multi-system cooperative venture called LeeSar and its Culinary Solutions centralized food production operation. 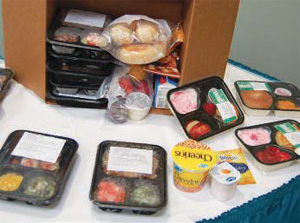 An example of a package of pre-plated meals and snacks produced by Culinary Solutions for a new senior nutrition program contract.

Housed in the almost new 204,000-sq.ft. LeeSar facility in Ft. Myers that was designed to withstand a Category 5 hurricane, the 38,000-sq.ft. Culinary Solutions operation shares space with aisles of soaring warehouse storage racks containing thousands of SKUs slated for redistribution, along with antiseptic cleanrooms where some 700 customized surgical trays a day are assembled, medical equipment is sterilized, pharmaceuticals purchased in bulk are repacked and medical/radiological records are stored.

In one section of this facility, nearly 50 Culinary Solutions staffers turn out 15,000 meal units a day for delivery to LMHS sites with an efficiency and cost-effectiveness no onsite alternative could ever match. This includes 2,700 patient trays and an equal amount of packaged grab-and-go meals, plus bulk products like soups and sauces.

Culinary Solutions also incorporates a bakery that turns out everything from artisan breads and gourmet pastries for catered functions to muffins and cookies for patient trays and retail sales. A floor stock redistribution operation each day delivers over a hundred bins of packaged products to LMHS hospital sites where they are further redistributed across the facility.

Central production at Culinary Solutions allows LMHS hospitals to offer a cost-efficient modified room service program for patients as well as upgrade their café menus and implement the Journey to a Healthier You healthy eating initiative across the system.

Yet to come: the new Golisano Children’s Hospital complex, planned to open in 2017, which includes a strong investment in the onsite foodservice operation.

The story of LMHS dining’s evolution to its current high-tech “mass customization” food production approach began shortly after Lee Memorial Hospital acquired nearby Cape Coral Hospital in 1998. The move prompted a review of how Lee Memorial ran its support functions.

“I was asked by our vice president of planning to look into consolidating foodservice operations,” recalls Larry Altier, system director of food & nutrition services for LMHS. A study commissioned by the hospital indicated the expanded system could benefit from such a move in a variety of areas.

“We chose to concentrate on foodservice and purchasing/distribution at the beginning,” Altier says. “That meant consolidating food production as much as possible.”

Lee Memorial, which had some excess space, was chosen to host a centralized production kitchen, which soon was producing and distributing 1,700-plus patient meals a day. That system worked well for a number of years, saving the foodservice operation about a million dollars annually.

“Meal counts were going up and the footprint in Lee Memorial was too small to manage the logistics efficiently,” Altier recalls. “We knew we needed to do something to increase capacity.”

That’s when the stars began to align…

Back in 1998, Lee Memorial had partnered with another hospital, Sarasota Memorial Health, on an innovative regional initiative called LeeSar. Originally designed to give the hospitals purchasing leverage (through an entity called Cooperative Services of Florida) as well as provide economies of scale by consolidating service functions like equipment repair, LeeSar was originally located in a modest 60,000-sq.ft. facility. But, as was becoming increasingly obvious, it could not support LeeSar management’s ambitious plans.

Led by visionary CEO Bob Simpson, LeeSar was looking to expand into a much broader array of support services, from centralized procurement and the receiving, storing and redistribution of bulk-purchased medical supplies, to equipment repair, medical device sterilization, surgical tray assembly and the repackaging of bulk purchased pharmaceuticals. 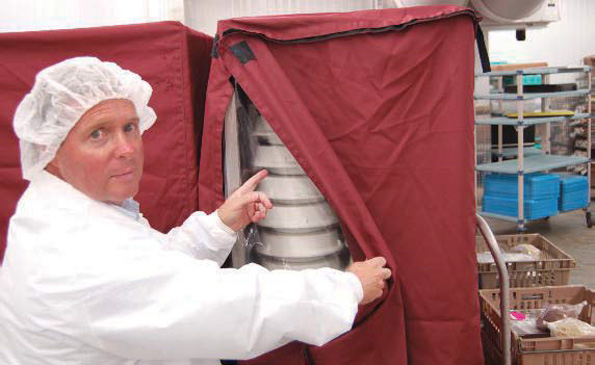 Culinary Solutions Director of Operations Rich Roberts shows how patient meals are packed and held until delivery. The whole operation meets or exceeds USDA safe food production standards and is overseen by a QA manager with a PhD in microbiology.

The new facility provided space for LMHS to construct a much-expanded central production operation at a fraction (as much as a quarter by some estimates) of what it would have cost had it been built at one of the hospital sites.

Construction on the $40 million LeeSar facility began in 2011 and it opened for business on a limited basis the following year, serving not just original partners LMHS and Sarasota Memorial but two new members, Central Florida Health Alliance and Huntsville (AL) Hospital, as well.

The offsite production operation allows LMHS to offer patients a modified room service system that combines a meal preorder system with on-demand service that lets them make meal requests all day. The pre-orders help anticipate production requirements and allocate labor efficiently. At Lee Memorial Hospital, for example, about 60% of the 800 daily patient meals are preorders.

A central call center handles meal requests and takes nutrition related questions, having access to patient dietary restrictions and to menu nutritional profiles. The call center also allocates two of its service representatives to contacting new admissions to welcome them to the program and explain the patient dining system. 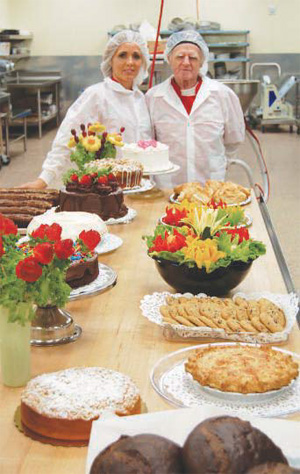 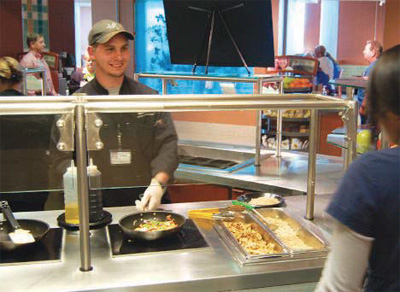 As part of a new emphasis on healthier and higher quality retail dining, LMHS rebranded its onsite dining operations under the Fresh Harvest label in 2011. In 2013, it signed on with the Healthier Hospitals initiative, which commits it to meeting specific benchmarks involving balanced menus, healthy beverages and local food usage.

The goal, says Altier, is to have three-quarters of what is served in LMHS cafés compliant with American Heart Association guidelines on sodium, fat and calories. That means more emphasis on plant-based foods similar to a Mediterranean Diet approach. The move to meet the Healthy Hospitals goals, termed Journey to a Healthier You, was initiated at Cape Coral Hospital last June and subsequently expanded to the other locations.

The role of Culinary Solutions in all this is to develop suitable recipes and efficiently produce key menu components while the hospital sites encourage healthy choices through a combination of strategic positioning, pricing and education.

The healthy new choices are introduced while the traditional unhealthier ones are carefully pruned. “As long as you have good alternatives and enough variety, people accept it,” Altier notes.

Sugar-laden bottled beverages have been removed from café cold cases, though they remain available in vending machines, where they are higher priced because they are not subsidized. The only place to get sweetened carbonated drinks in the cafés is the fountain, where portions are of a lower concentration and limited to 12-oz. cups.

One noted retail menu initiative that came from this effort is the Cosmos Grill, which offers a rotation of five weekly cuisines, each with its own choice of meal components that can be mixed and matched for optimum customization.

Each day, customers can also choose a specific combination that is advertised as the special of the day. These specials accumulate over the week that the cuisine is featured so that by the end of the week there are five, each progressively more familiar to regular customers.

Two recent initiatives that have grown out of the Culinary Solutions operation at Lee are a senior nutrition program and the Fresh [email protected] therapeutic home meal replacement program. Both are designed to address community wellness issues while leveraging the production operation’s excess capability. Currently, Culinary Solutions is producing at only about 60% of its full capacity, Altier says.

The senior nutrition program prepares and home-delivers pre-portioned nutritionally balanced meals to seniors through a contract with nearby Collier County. The food is delivered by third-party carriers.

Meanwhile, Fresh [email protected] is currently in pilot phase. It is designed to target discharged patients who are at risk of malnutrition by supplying them with therapeutically appropriate meal packs. A pilot, currently underway, involves 250 patients getting meals for 90 days, with a 90-day followup to assess impact on readmission rates.

Culinary Solutions is working with Selovita, a local organic urban farmer, to source fresh produce. Currently, the only product is hydroponically grown lettuce used in retail outlets but plans are to add other products like onions and tomatoes and to expand into supplying produce for patient dining as well.

Selovita is also growing tilapia at its site in an industrial section of Ft. Myers. The fish will be processed into filets at a separate site across the street. The water from the fish tanks, rich in nutrients, will then be used to fertilize crops at the site and also sold to other growers to help subsidize the operation.

“We had been exploring the idea of building a small greenhouse to support our agriculture needs,” Altier says. “But after meeting with the Selovita folks, we decided to strike up a partnership and they’re growing it for us. Meanwhile, we’re helping them develop market share and develop product lines.”

Altier estimates Selovita can supply about a third of Culinary Solutions’ produce needs once it’s running to capacity. It currently sources about 80% of its produce needs within a 250-mile radius during the winter months, working with Selovita and local supplier Sunfresh Produce.