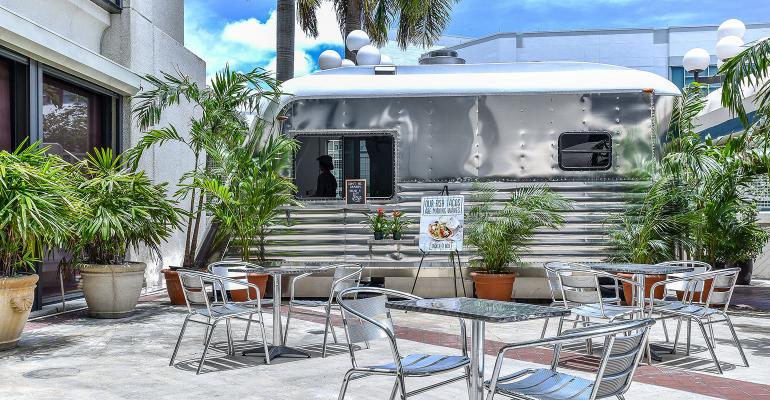 Healthcare Innovator of the Year: Morrison at the University of Miami Hospital

When Morrison Healthcare took over operation of in-house foodservices at the three University of Miami Health System hospitals (UMH) a couple of years ago, it was given a mandate to “transform the campus to be what the University of Miami wanted to stand for, and that was a world-class organization,” says Kevin Sweizer, Morrison’s regional vice president who oversees operations at UMH. “They said they wanted [customers to have] a Ritz Carleton experience.”

The upgrades ranged from major overhauls of the main cafeteria and central production kitchen and the full implementation of Morrison’s Dining on Call room service ordering and Catering to You bedside ordering patient dining programs, to placing a food truck into an outdoor courtyard area and even designing a dedicated menu for UMH’s in-house daycare center. 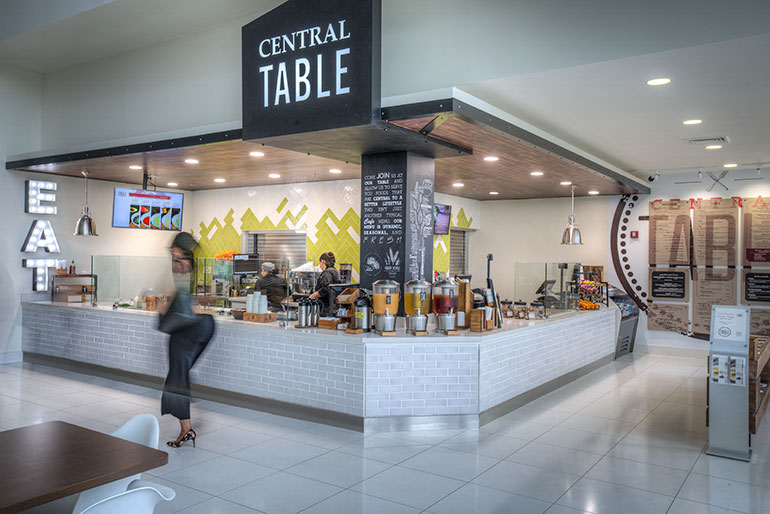 Along the way, Morrison has also used UMH as a showcase for some of its most creative branded concepts, including Central Table, Copper Spoon (now discontinued), Daily Press, Market Coffee and the rotating pop-up restaurants of the Best Concept Award winning Branded Concepts program.

“We initially started the contract at a small retail location, but later won it for the larger three-hospital system,” Sweizer explains. “We invested quite a bit of money on renovating [over half a dozen] retail areas in the main hospital and eight or nine altogether. We really transformed the entire campus from the retail perspective for them.”

The work involved collaboration with Morrison’s analytics team to determine exactly what kinds of menus and concepts would best fit the location, given South Florida’s considerable Latin population. Physical plant and venue renovations were done in partnership with the Birmingham, Ala.-based Robins & Morton Construction firm.

“We met with everybody and created basically a different platform for each of the areas,” Sweizer says. Some were more challenging than others.

For instance, one retail outlet was situated in the hospital’s wellness center, on the ninth floor, with floor-to-ceiling windows providing a view of downtown Miami. That’s wonderful, but the space was also located right next to the wellness center’s workout area and “one of the biggest issues they had with the previous vendor was smell of the food,” Sweizer explains. “You don’t want to be smelling chicken cooking while you’re on the treadmill trying to lose some calories.”

The solution? Sous vide-style production that is done in the main kitchen across the street, where the food is cooked, sealed in air-tight Cryovac packaging and blast-chilled. Because re-therming is done with the food still sealed in the Cryovac bags, cooking odors are minimized and the workout warriors remain unmolested by tantalizing aromas.

As this café is in the wellness center, it emphasizes healthy dishes, including fresh-pressed juices, teas and smoothies—plus the obligatory Cuban-style coffee because it’s South Florida.

Another exotic location set the stage for a rather creative dining solution. This was a courtyard next to an indoor café area of UMH’s Bascom Palmer Eye Institute, where Morrison had installed its newly developed coffee shop concept, Market Coffee.

“They wanted to utilize the retail area outside on the patio, because for six or seven months of the year, it’s a good place to sit outside as it’s under a canopy with ceiling fans and plenty of seating,” Sweizer explains. 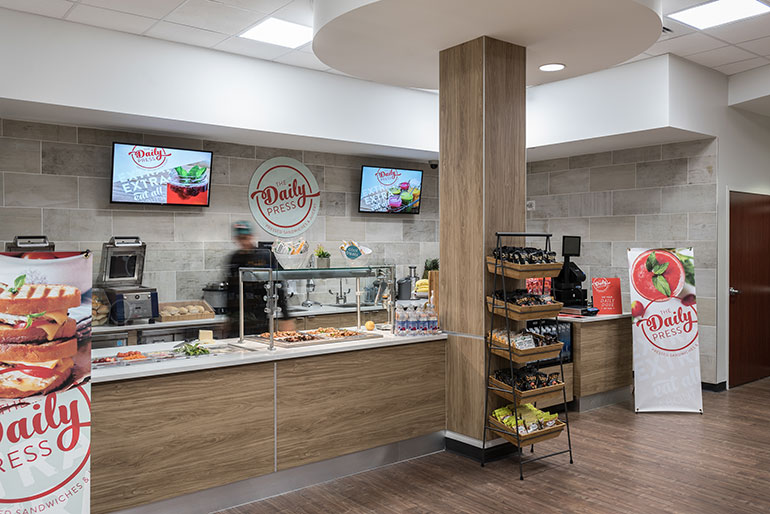 The solution the company came up with was rather out-of-the-box.

“We put in what to our knowledge is the first-of-its-kind-in-healthcare food truck,” Sweizer says proudly. “We went out to Gulfstream and contracted to make us a food truck that could fit out there.”

The “truck” is actually an old-style camper trailer and is not motorized, but it still offers the feel of a food truck and all the trendy associations that serving platform implies. That is important because Morrison had to deal with significant competitive challenges when it created the retail dining environment at UMH.

“The area around the campus has a tremendous amount of competition, so in each of these venues we tried to create something that was nothing like anywhere else [close by],” Sweizer explains.

For maximum flexibility, the truck branding was left generic—it’s called Miami Eats to accommodate a variety of menu concepts—with the décor incorporating the University of Miami school colors of green and orange.

The main café, located on the first floor of UMH’s main hospital, posed a challenge because of the need to stand out from all the street competition. Originally, the client wanted a national branded QSR unit, reasoning that that would be the only way to attract customers, but eventually a change in thinking led to a preference for something that better reflects UMH’s view of itself as an elite institution that offers a Ritz-style approach to service and hospitality.

That then led to the creation of an upscale sandwich/deli concept called Daily Press that uses premium ingredients like whole-muscle and braised—not pressed—meats cooked on the premises. Designed to be an upscale version of Subway, Daily Press remains open until 11 p.m. daily, to give second- and third-shift staff a high-quality dining option.

“We offer a selection of seven or eight sandwiches on any given day, plus all fresh-pressed juices,” Sweizer explains. “We do bowls out of there as well, and the concept has really taken off.”

The Daily Press brand also appears in the menu rotation in the Miami Eats food truck—although with a somewhat reduced menu—and has also now been implemented at several other Morrison-operated healthcare sites across the country.

“It’s nicer looking than a Subway—nicer tiles, nicer finish, nicer counters,” Sweizer says proudly. “Everything is made fresh to order, with a machine like a combi press and steamer that presses and melts the cheese” for the hot sandwich selections.

Other changes to the main café included installing a pizza station with a Wood Stone pizza oven and becoming one of the first Morrison accounts to implement a Branded Concepts pop-up station where a variety of cuisine concepts rotate regularly to provide variety. In fact, the team at UMH contributed to that initiative by developing a concept that has become part of the rotation: Cantina, which offers Latin-flavored dishes of the kind prevalent in South Florida.

Another innovative touch to the UMH dining program effected by Morrison is tying the retail and patient dining sides together through a strategy of offering one of the patient entrée choices each day on the retail menu.

“We just make a couple extra pans and serve it in the café,” Sweizer explains. “We want people to know that we are serving the same quality of food in the retail area that we serve to our patients. We don’t always advertise that, but people know it. For example, a nurse might approach a patient and say, ‘Mr Sanchez, I see you’re having the picadillo—well, I just had that in the cafeteria today and its wonderful!’ That just [emphasizes] that we’re not just serving your average patient food.”

The approach is also efficient as the dish is prepared in one location and production can be split between the patient and retail sides as needed.

One concept that the Morrison analytics team found was critical in the South Florida market is coffee, and not just the ubiquitous Starbucks kind of coffee either, but the more robust Cuban style with its distinct flavor. Hence the creation of Market Coffee, which supplanted Copper Spoon, the coffee concept originally placed into UMH, which Morrison has now shelved.

“Market Coffee is a rebrand of Copper Spoon that more matches the expectations of this area and serves a coffee more acceptable to this population,” Sweizer observes. “We really have to make sure we honor the local cuisine.”

Market Coffee serves a locally famous brand called Bustelo. “We would have gone with the [Starbucks] We Proudly Brew approach but our analytics said if we did that we’d miss something here,” Sweizer explains.

Analytics also indicated a strong preference for room service-style patient dining, though the approach is split between patient-initiated orders by phone—Morrison’s Dining on Call platform—and bedside ordering through patient service representatives—the Catering to You platform. About a quarter of the patients at UMH are on Dining on Call, the ratio restricted by the number of patients willing and able to initiate orders.

The implementing of the room service-style patient dining programs required a full production kitchen remodel, including revamping the trayline and building pod stations. It was an 18-month job altogether, Sweizer says, hampered by the fact that the kitchen is in an older building.

An unusual additional meal service assignment for the Morrison team at UMH involved the hospital’s in-house daycare center, an amenity exclusively for UMH employees with small children. Previously, the center simply received a couple of pans of food from the day’s production each day but Morrison took a more proactive approach.

“We had our dietitians go over and meet with them, do a little focus group and then tailor a menu that would best serve their needs,” Sweizer says.

With all the changes, one would think there would be internal resistance, not from administration so much as from the existing workforce. But in fact, according to Sweizer, Morrison’s relations with the workers has been positive.

The reason? “It starts with communications and training—those are the cornerstones of what we do,” he asserts.

“Well, we’re just taking a deep breath now and just looking to see how can we continue to improve on what we’re doing,” Sweizer offers. “Changing out Copper Spoon is a great example of this because even though we had introduced that brand [only] two years ago, we decided to make a change as a matter of keeping it fresh and not getting stale. [Also,] a lot of new pop-up brands are being test marketed down here and we just redid the Central Table menu.”

Central Table was originally designed by celebrity chef and Morrison Vice President Cary Neff five years ago as the next word in healthcare retail dining, winning an FM Best Concept Award in 2016 and a unit was subsequently rolled out in UMH as one of the first locations outside the original one at Barnes Jewish Hospital in St. Louis.

But tastes evolve and local preferences are made clear over time, so “we just decided to look at what items moved and what didn’t,” Sweizer says. “We ended up changing maybe 20 percent of the menu. For example, our analytics told us ceviche was popular down here, so one thing we added to the menu was ceviche and a couple other dishes along that line.”