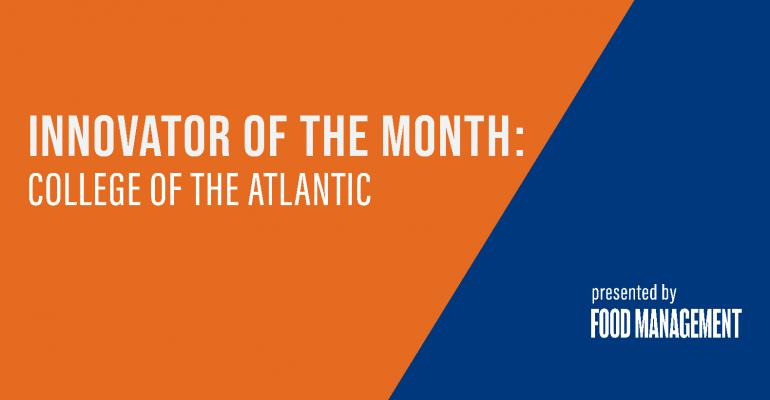 At College of the Atlantic, all meals are made from scratch using local and organic ingredients where possible and meatless offerings are plentiful given the school’s large proportion of vegetarian and vegan students while the proteins for meat-based dishes are humanely raised and sustainably sourced.
Onsite leaders>FM Innovators

Tiny College of the Atlantic has topped Princeton Review’s list of the country’s greenest colleges for the past six years. Here’s how its dining program fits into that success.

College of the Atlantic (CoA) lives and breathes sustainability. The tiny school located in Bar Harbor in Maine only has an enrollment of around 360, with about a hundred living on campus, and awards bachelors and masters degrees in just one subject—human ecology—so it’s not especially surprising that the Princeton Review has placed CoA at the top of its “Top 50 Green Colleges” listing every year since 2016.

Still, maintaining such a level of commitment, especially in an era when many other schools have embarked on their own intensive sustainability initiatives, takes some effort, but CoA has the institutional culture to do that. Established in 1969 as the first college in the U.S. specifically founded to focus on the relationship between humans and the environment and the first college in the country to become carbon-neutral (in 2007), CoA pursues excellence in areas like the use of regional resources, waste diversion and renewable energy as well as its sustainability-focused academics.

Obviously, the campus dining program is a part of that sustainability effort, given how foodservice affects areas like the use of local vendors, waste reduction and energy usage in an institution. At CoA, all meals are made from scratch using local and organic ingredients where possible and meatless offerings are plentiful given the school’s large proportion of vegetarian and vegan students while the proteins for meat-based dishes are humanely raised and sustainably sourced. The menu also incorporates a plentitude of dishes from cultures around the world, reflecting the school’s diverse student body, which also actively assists in menu planning.

College of the Atlantic 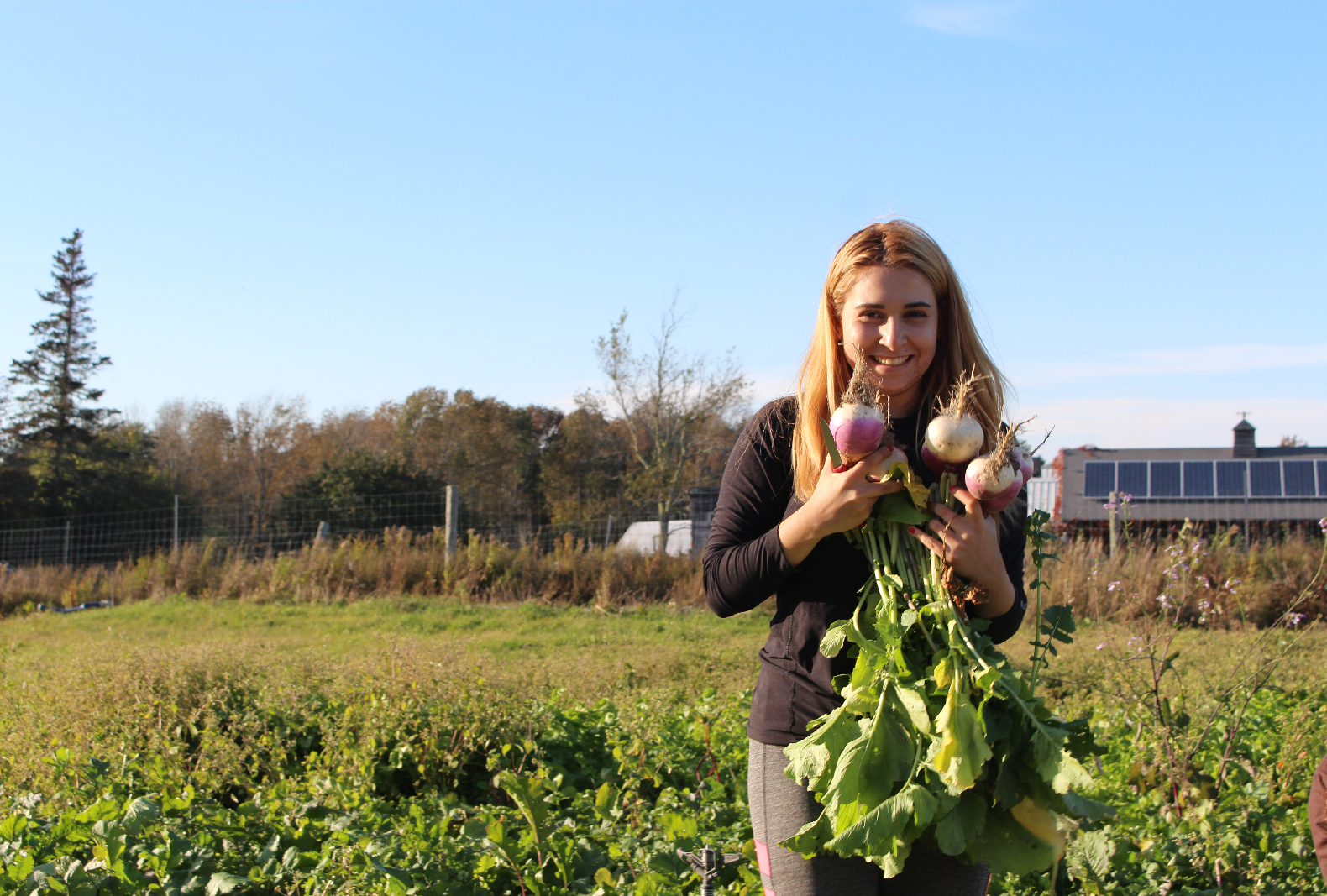 College of the Atlantic’s farms provide a portion of the ingredients served in dishes on campus, though Maine’s short growing season restricts produce production.

To reduce waste, leftovers are made available at the next meal or next day, and anything left over after that is placed in a community fridge.

“It’s packed up and sent down essentially immediately, and basically given away for free,” explains Ken Sebelin, a CoA graduate who was named co-director of the dining program in 2004.

To further reduce waste, there is also an on-campus composting program and any remaining food waste that can’t be repurposed is sent to Agri-Cycle Energy, a major regional food waste collection service that reprocesses it into renewable energy.

Meanwhile, even as the pandemic forced dining service operators into using disposables, CoA maintained its commitment to environmental integrity by sourcing and using compostable dishware and utensils for its all-takeaway meal service during the year its dining hall was closed to in-venue dining.

“Our relationship with Agri-Cycle allowed us to go to compostables, which we felt was the best option at the time,” offers Sebelin. “Very little goes to landfills, which is one of our true strengths when it comes to our green ranking,” he says proudly.

Campus dining at CoA is collaboratively overseen by Sebelin and Lise Desrochers as co-directors and operates from two locations: the Blair Dining Hall and the Sea Urchin Café retail outlet, which serves sandwiches made to order, pizza, soup and smoothies weekdays between 11 a.m. and 3 p.m.

“Getting 60 people down there for lunch definitely takes some pressure off our dining hall!” Sebelin laughs. “A couple students also open it up during the evening for studying with things like popcorn and nachos,” he adds.

College of the Atlantic 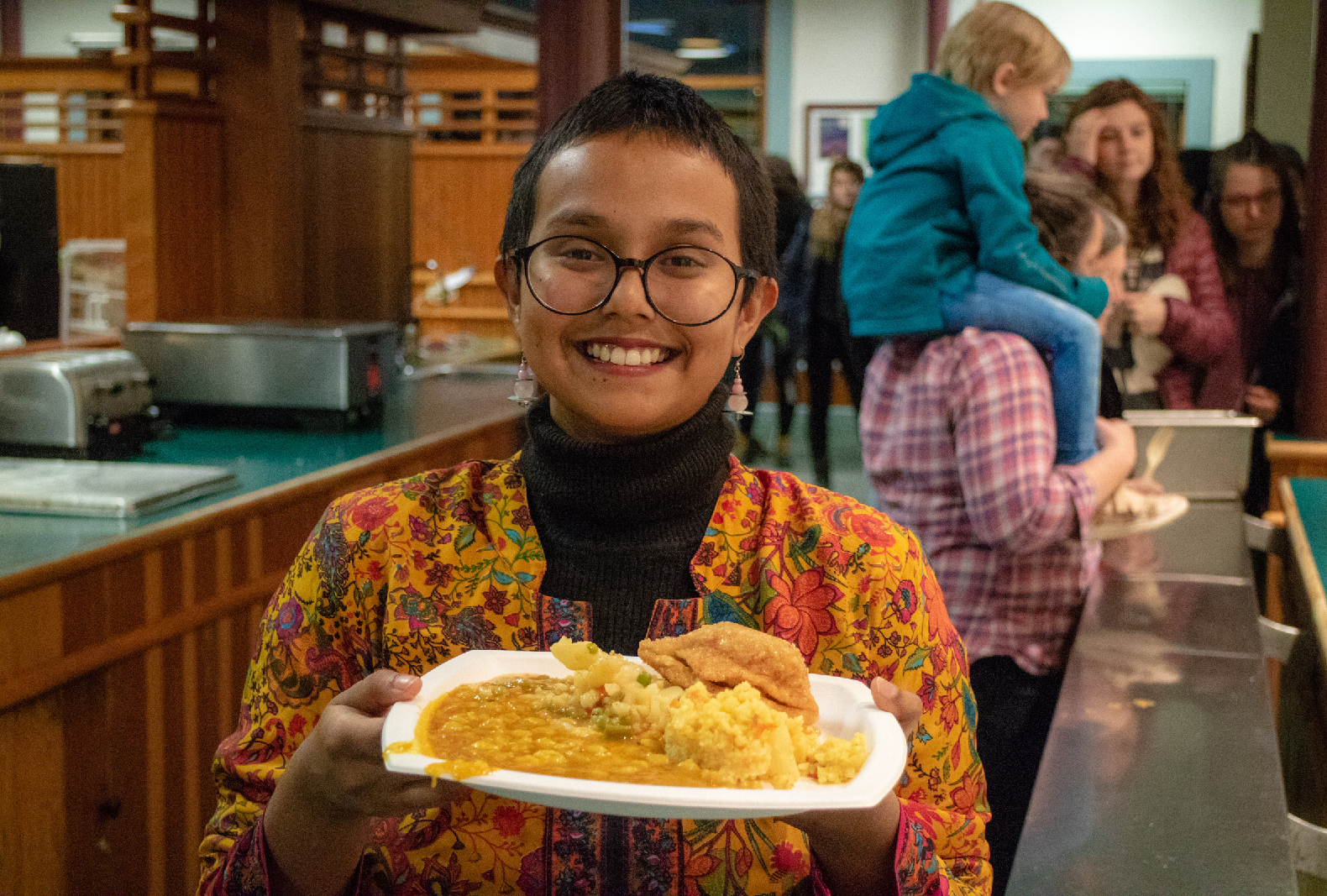 The campus dining program at College of the Atlantic has many meatless dishes made from scratch using local and organic ingredients where possible, as well as many from cultures around the world, reflecting the school’s diverse student body, which also actively assists in menu planning.

Lunch consists not only of cold fare like sandwiches but also offers a full hot meal with soup, entrée, sides and starch. Ordinarily, there’s also a salad bar, though it is currently inoperative due to COVID.

The breakfast and lunch are managed by Desrochers while Sebelin manages dinner and the Sea Urchin Café. The dining staff generally employes around half a dozen or so full-timers augmented by work-study students

Both Blair and Sea Urchin Cafe operate only during the week, so there is no campus foodservice on weekends.

“There are kitchens in every dorm in the [recognition] that once you are 18, it’s time to start to learn how to take care of yourself, and this is one of the ways to learn,” Sebelin offers. Dorms also often have community meals on weekends, he adds.

The availability of product from the campus farms mitigates—but doesn’t eliminate—supply issues. Animals raised on the farm and sent to an outside firm for slaughter and processing do supply “a large percentage” of the program’s meat needs, per Sebelin, but produce availability is hampered by the school’s geographic location in Maine, where the fairly short growing season largely coincides with the summer break.

“We utilize what they have but we’re in a tough climate,” Sebelin concedes. “The groups that are here during the summer really get the bounty of what our farms are producing into September, but after that it starts to get cold pretty quick up here.”

That means seasonality in menu options is emphasized, with plenty of use coming from winter staples like squash, potatoes, kale and cabbage. That might pose a problem at some schools, but not CoA, Sebelin proudly notes.

“The fact that we have a student population that comes here wanting to be sustainable and understands why there’s kale on the menu every week helps us to succeed because we’re not fighting against them.”

The dining program also aligns with the academic activities, with classes regularly coming into the kitchen to interact and even instruct. For example, a class learning about the ethnography of food traditionally takes over the kitchen one day a week during the winter term and directs it in preparing certain ethnic or cultural dishes that are then served in the dining hall.

“It’s fun and interesting for us and some of those items have remained on the menu to this day as regular players,” Sebelin notes. He cites a fiambre salad from Guatemala as an especially popular example.

Overall, menu planning, as might be expected from such a small operation, is fairly informal.

“Because we have so many students who work in the kitchen, we allow them when we’re planning the menu, to [take part],” Sebelin says. “For example, we’ll say, ‘If you want to teach us how to make [a certain kind of] dumplings, we’ll put those dumplings on the menu.’ Or we may have two students with their own little version of Chopped, with the two of them making two different things for everybody.”

As for menu planning in general, “we literally approach it on a week-by-week basis. Either Lise or I will do our side of the menu and the other person will fill in appropriately. We know what’s available from our farm. Often, we’ll ask the students working with us if there’s something they’d like to have, maybe something their mothers made them that they wish they could have. We try to have it fun with it.”

Dietary restrictions and choices like gluten-free and vegetarian/vegan are accommodated individually.

“We are so small that we literally can prepare for them on a case-by-case basis,” Sebelin explains. “I know each person. We have students with soy allergies and nut allergies, and we basically make them their own meal, put their name on it and have it ready for them.”

First-year students are generally required to live on campus and are automatically enrolled in the 15 meal/week dining plan, while the rest have options that include 5, 10 and 15 meals/week plans or a declining balance option.

During the school year, the meal program serves about a hundred breakfasts, 225 lunches and 175 dinners on a typical day, according to Sebelin. The counts are affected by the various off-campus programs students participate in as part of the curriculum that keeps them away for periods of time.