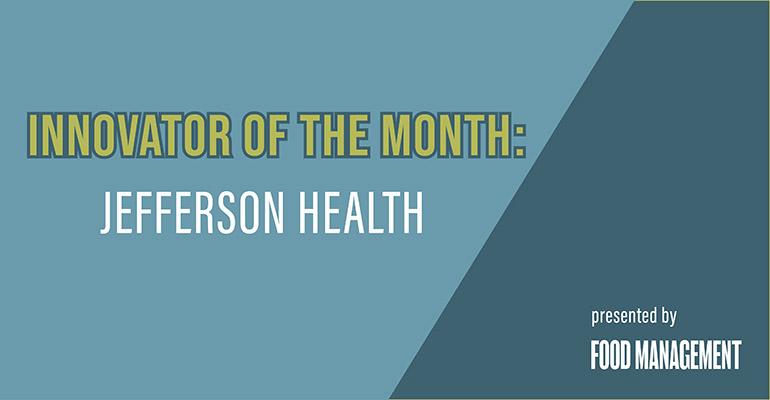 Simply Good Jars choices include vegan, vegetarian and meat-based salads as well as breakfasts and snacks. All meals are under 600 calories, and the menu changes weekly based on the season and preferences at each location. Prices range from $1.89 to $10.95, and the “smart fridges” accept credit and debit cards. A bin next to the units promotes returns of the reusable jars. 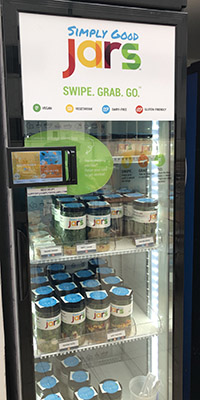 After a successful pilot at several Jefferson Health locations, more smart fridges are in the works across the system, says Stephanie Conners, executive vice president and chief operating officer. The main hospital is also the first trial site for a Simply Good Jars healthy beverage fridge, which offers a variety of sustainable and locally sourced options, including cascara (coffee cherry tea), kombucha and Just Water.

While the smart fridges don’t provide a revenue stream for the hospitals, Conners says that wasn’t the goal. “What really drove our decision was the ability to offer healthy choices,” she says. Supporting a local startup was a plus to the partnership. And Simply Good Jars founder and CEO Jared Cannon does give back to the hospitals, pledging 50 cents per returned jar to support Sidney Kimmel Cancer Center, a Jefferson Health facility.

Jefferson’s pilot program is the first time the smart fridges have been offered in a hospital setting. Cannon, a chef who took his jarred healthy meal idea to the next level with the vending units, says, “we service every level, from Fortune 500 companies, to law firms, to coworking spaces—and everything in between.”

Conners says food purchased from the machines doesn’t seem to be siphoning business away from Jefferson’s main Atrium cafeteria, satellite cafés and markets, which also provide healthy alternative menu items, but shut down in the evening (an exception, the Atrium, offers express service until 9:30 p.m.). “The reality is, when you have no options at night, these are new sales,” she says.

“Offering Simply Good Jars is another way for us to put our values into action—putting people first, being bold and thinking differently and doing the right thing,” Conners adds. 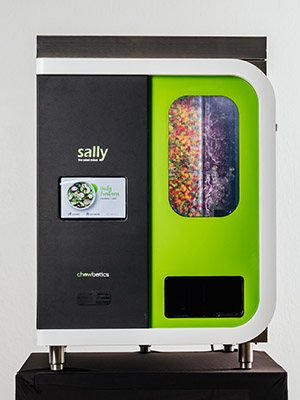 Photo: Sally the Robot is not installed yet, but will be at Thomas Jefferson University Hospital in Philadelphia.
Credit: Chowbotics

Another 24/7 solution soon to fortify the army of Simply Good Jars units is Sally the Robot, a machine that quickly prepares customizable salads, yogurt bowls, grain bowls and snacks using robotics and algorithms to dispense precise portions of already-prepped ingredients. With a three-foot-square footprint, it holds ingredients in chilled canisters and can be loaded with enough to dispense 50 to 100 orders. It will be stationed in the main hospital’s atrium dining area. The hospital’s Sally, made by Hayward, Calif.-based Chowbotics, will be the first in the state.

Reaching within, beyond the hospital walls

Jefferson Health’s commitment to healthy dining extends outside the hospitals and into patient rooms as well.

The bright yellow truck also serves as a billboard, appearing at Jefferson-sponsored community events, such as community festivals, health walks and screenings. It operates from April until November. Conners says the truck sometimes serves food at these events as well. 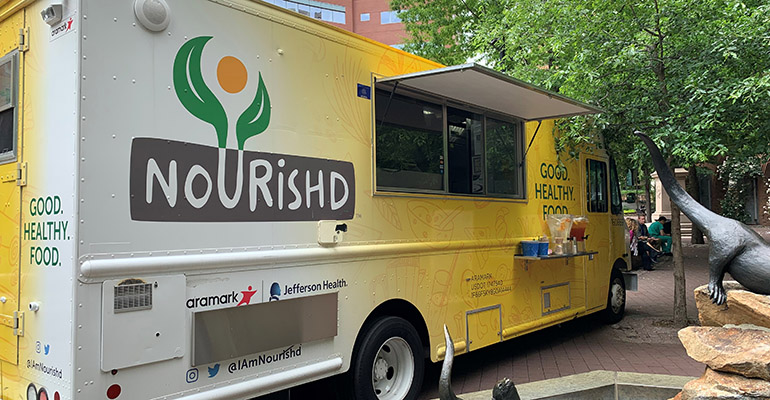 Machines represent only one tactic in efforts to boost healthier lifestyles. In 2014, after a community health needs assessment determined that the surrounding neighborhood lacked sources for healthy foods, Jefferson’s Frankford Hospital installed a 2,000-square-foot community garden on the front lawn.

The garden serves not only as a teaching model for how it is possible to source healthy food in an urban setting—by growing your own—it also feeds the neighbors. The garden is tended by hospital staff, volunteers and community groups, and the fruits, vegetables and herbs they grow find their way to families and nonprofit groups that feed the underserved community.

Jefferson’s patients are targeted for healthy meals as well. The hospital system subscribes to the American Heart Association’s Healthy for Life 20 By 20 initiative, which aims to reduce the calories, saturated fat and sodium in meals by 20%, and increase consumption of fruits, vegetables and whole grains by 20% by 2020. As part of that, the hospitals’ nutrition staff has introduced more than 200 new plant-based recipes to patient menus, and the hospitals have reduced meat in recipes by about 5%. 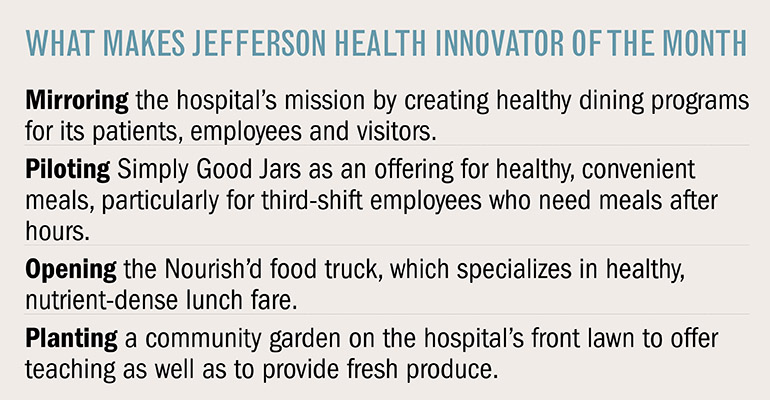 Conners says Jefferson Health is considering additional initiatives to promote more healthful eating. “We are consistently looking at healthy food options,” she says. “When we find something that works, we can expand it across the enterprise.”

And that enterprise is considerable. Jefferson Health is Philadelphia’s second largest employer. Between patients, more than 30,000 employees, 8,400 healthcare students, 6,100 physicians and other medical professionals and 4,600 faculty members, Jefferson Health has a lot of appetites to satisfy, not to mention serving the community. By making better food choices easier to find, Jefferson is honoring its commitment to health.