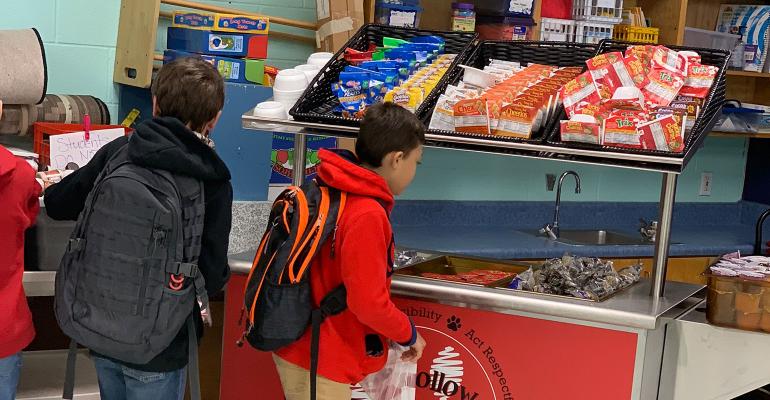 This district never stops trying to find better ways to get food to kids and to keep up with their changing preferences.

At Tuscaloosa County Schools in Alabama, they never stop trying to meet customer preferences. The program declines to establish a set menu for a school year, preferring to keep experimenting and trying new things, which, of course, has a cost in procurement and operations.

“We constantly recipe develop year-round rather than setting a menu for the year over the summer,” she says. “I have a nutrition specialist with a culinary background and will come up with some random things. We throw it out there with the kids and are constantly taste-testing with them.” 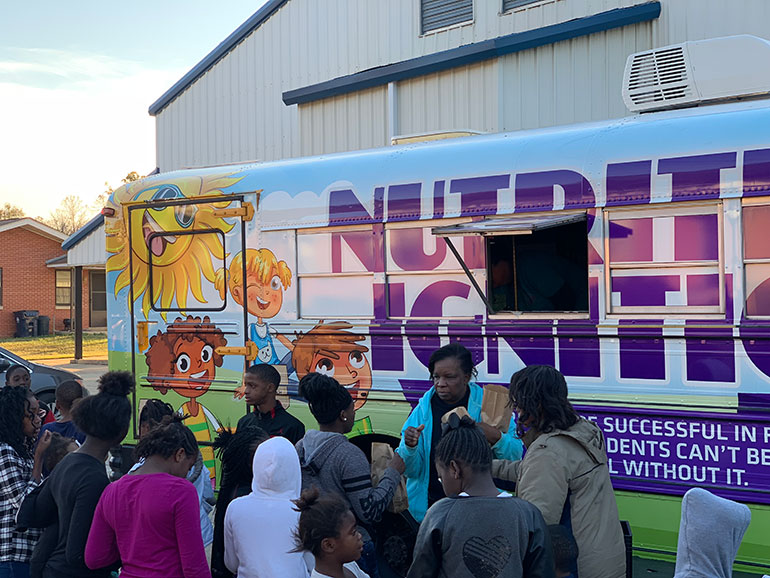 Worthy is a passionate pursuer of solutions to child nutrition challenges, from menu tweaking for better results to finagling a way to get summer meals out to housebound kids in the surrounding communities. That latter initiative involved getting the district to donate a school bus slated for replacement as a mobile feeding platform.

That repurposed bus (Worthy outfitted it with equipment salvaged from un- or under-used units sitting around in storage or out-of-the-way corners in various district sites) is now also being used to supplement the afterschool feeding program, called Super Snacks, and she has plans to deploy it in the mornings to different sites as a boost to breakfast counts.

“We’ve started the bus supper but not breakfast, as we want to take things one thing at a time,” Worthy reports. “Breakfast will start later this year, but it’s one hurdle at a time. I tend to jump in with both feet on things, so I’ve had to pull myself back some,” she laughs.

The bus-based supper program currently makes stops at four locations where it can reach the most kids. One is a YMCA with an afterschool program, and the others are government housing areas.

“I spoke with a lot of parents in these areas, and a lot of the children just go straight home [after school] instead of staying for any afterschool programs,” Worthy says. “We knew kids would be there and in a high concentration as well as [with a] high need, and that’s why [the YMCA] was picked.”

So far, the bus option has resulted in 200 to 225 addition supper meals being served each day, a total that Worthy considers only a start. She wants to add a second bus next year so more sites can be covered. Tuscaloosa County, despite the presence of the main campus of the University of Alabama, has significant pockets of poverty.

While only about half of the district’s 18,600 students qualify for free or reduced-price school meals, there is great variance among the different school sites, which range from the low 20s to the high 90s in free/reduced percentage, with seven of the district’s 34 school sites being CEP schools.

For in-school lunch meals, the program offers a centralized menu with an escalating number of entrée choices based on academic level: two in elementary schools, three in middle schools and four in high schools.

Those entrées, as well as side components, are constantly evolving as ideas come in. 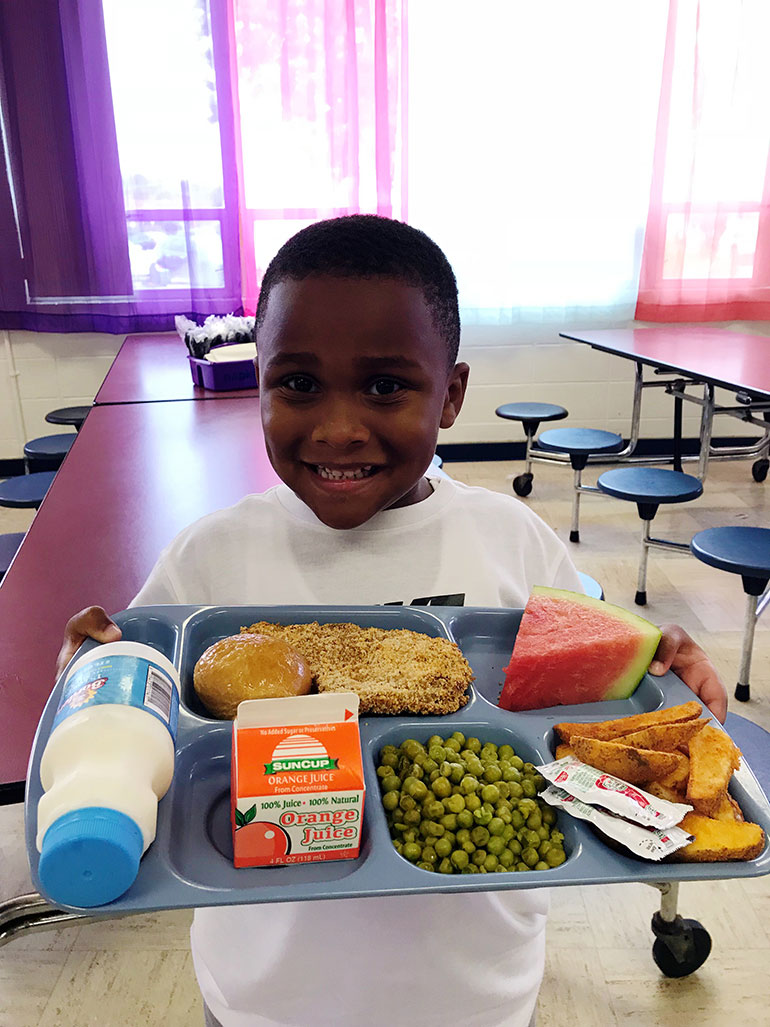 “We might see something on social media that may not even have anything to do with child nutrition or maybe a restaurant ad,” Worthy explains. “I can get emails at 2 a.m. saying, ‘let’s try this,’ or we might see that another child nutrition program has done something and so we do our own spinoff off of it.

She cites a Greek-flavored chicken dish inspired by a locally noted eatery, Taziki’s Mediterranean Café, as an example of an externally inspired dish. Her version, called chicky chicky bang bang because of the housemade sauce “with a bit of a kick” that flavors it, went on the menu in the fall while the winter cycle will include recently developed selections such as a poppy seed chicken dish, a smokehouse barbecue dish and a berry hot chicken dish that combines spiciness with a berry flavor.

And those “hot” and spicy dishes are served at all levels, not just high schools.

“Whenever we come out with a new recipe, we test it to make sure not too hot for little kids,” Worthy notes. “We run three menu cycles a year and as we’re developing the next cycle, if there are new recipes [we are considering], we’ll taste-test it with kids.”

While like at most districts, a la carte has been de-emphasized and the options tailored to meet federal Smart Snack rules, it “holds its own” in Tuscaloosa County Schools, particularly the high schools where students can purchase a second entrée—an additional slice of pizza is a popular choice—as well as add-ons like Kellogg’s Rice Crispy Treats, Scooby Doo snacks, chips, Gatorade and bottled water. One high school site regularly generates up to $12,000 a month in a la carte sales.

Breakfast is another area of innovation and experimentation even before any school bus-based dining platforms come visiting in the morning. While only two district sites offer breakfast in the classroom, Worthy has deployed breakfast carts with cloud-based tablet POS systems at about half a dozen school sites across all grade levels, offering hot and cold choices ranging from smoothies to sausage biscuit breakfast sandwiches.

“We tested it at two sites before we took it on and it doubled sales at one of my “lunch box” [i.e., low poverty] schools,” Worthy offers.

The cart menu is similar to what is offered in the cafeteria in the morning, except that the items have to be transportable, “so they’re a bit different,” Worthy notes, “but that also gives [students] more options, so if they don’t like what’s in the cafeteria, they can come out to the cart.”

The draw of the cart-based morning meals helps in another area as well, Worthy adds. “It helps break the stereotype about school breakfast that it is only for the free/reduced kids,” she says, “so if we bring [the food] out to the hallway, while it’s still the same thing [as in the cafeteria], they feel like the stigma’s gone, and so we have more participation.”

Also, she adds, “in the middle and high schools, [the time before the morning bell] is social hour, so they don’t want to go to the cafeteria because in many schools, once you’re in the cafeteria you’re stuck there.”

The cart program has been equally successful at all levels, Worthy says, noting that one elementary now feeds more than 300 at breakfast daily thanks to the cart.

As for her plan to use the bus as a breakfast alternative at rotating sites, “we’ll pull into the parking lot and feed them there because that’s another place they like to hang out before school starts.”

She’s also looking at a possible breakfast after bell program at one high school that already has a built-in 15-minute morning break in its schedule, which might be used to offer a quick second-chance breakfast opportunity.