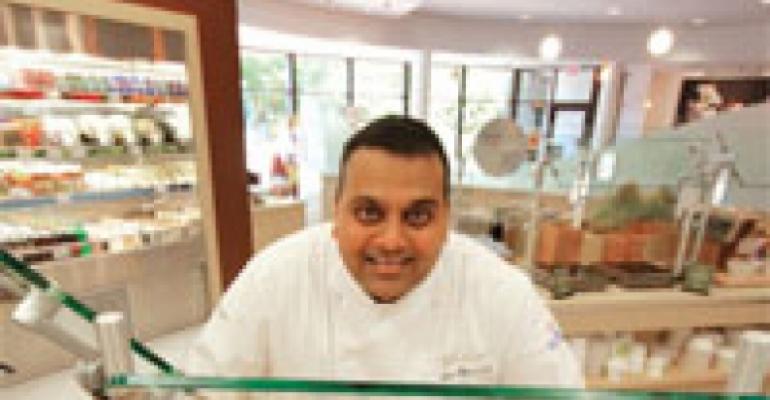 It's been something of a holy grail going back almost to the beginning of contract foodservices: a cost-effective way to provide fresh-prepared food to locations with small populations that don't generate enough traffic to support traditional onsite serveries and production.

The quest for a business model that adequately fills this need continues, the latest effort one developed by Compass Group North America that began operating at Carnegie Center, a Princeton, NJ office park, in mid August. Compass CEO-Contract Foodservices Rick Post is enthusiastically describing it as “a contemporary oasis that provides quality food offers, expands variety and delivers great customer service — all within a small space that minimizes cost to the location.”

Branded as “Simply Puur,” the operation is a complete re-build of the Greenway Café that Eurest division had been operating there. Following a two-week shutdown for renovation in June, the new café opened with a carefully conceived menu that employs the economic advantages of central commissary production, an onsite retail and “fresh-prepared” station ambience and an operating model that maximizes labor utilization.

While still in beta mode, Carnegie Center's Simply Puur is not seen by Compass as an experiment, but as a promising model that has been in development for two years and for which the company has ambitious rollout plans over the next 12 months.

According to Tracy Vessillo, Compass' vice president of retail innovation, “about 20 Simply Puur installations are in the pipeline right now,” and “we could see a majority of these up and running by the second quarter of next year.”

Ways to offer meal service to small site populations have always existed, of course. But while the calculus differs from location to location because of variations in labor costs, meal price points and site spending patterns, management companies have always considered an 800-1,000 employee population base a kind of viability threshold.

Below that level, competition from street restaurants, brown-bagging and other factors typically has meant that a subsidy of some kind was almost inevitable if a full service café was desired, a solution clients have become increasingly reluctant to embrace in today's business environment.

Still, what most B&I clients would prefer to offer employees, building tenants and visitors would be a somewhat downsized but still full-featured servery that provides all the advantages of traditional cafeteria service, including fresh-prepared food and café seating, all in a footprint of about 600-800 sq.ft.

In today's downsized and more decentralized business economy, there are many thousands of environments like this across the country. Outside consultants suggest that if a P&L-financed café model could operate profitably with $1,800-$2,000 a day in transactions, it would open up an important avenue of potential growth in the B&I space.

The Carnegie Center represents just such a challenge. The office park has multiple tenants in multiple buildings. Although there are about 800 potential customers there, the building that houses its café probably has only 200 of them in it. According to Kiran Bheemarao, director of Compass' Simply Puur project, “the café operates primarily as a P&L account, and like most small locations, the client wanted us to make it more efficient, with tighter cost control.”

As it previously existed, the café had seven employees: a chef manager, two full-time cashiers, three cooks and a ‘utility’ employee who handled miscellaneous duties. In its new iteration, Bheemarao says there will be four employees: a chef manager, one full-time cashier and two cooks/servers. Depending on demand, the chef manager can lend a hand on the cashier line or in production, and is charged with being actively engaged with customers and operations throughout the day.

Simply Puur's name came from an operating brand that Compass' Eurest division uses in the Netherlands, “and it is well known in that part of Europe,” Bheemarao says. “Rick Post saw it as having application here and brought it over.”

Simply Puur borrowed more than just the name from the European brand, and also from earlier Compass initiatives like Outtakes that the company has tried in the past to address the small site challenge. The most significant of these is the effort to meld commissary production economics with fresh-prepared café assembly, an approach other contract providers also use.

The Simply Puur signage was developed specifically for the concept's U.S. iteration, as are the menus and promotional collateral materials. These include a loyalty rewards and debit card program which will help speed cashier lines. Its menu is based on a centrally managed, four-week cycle with seasonal variations, one designed to offer both breakfast and lunch service with a mid-morning switchover.

The combined production and serving area is packed into a tight, 250-sq.ft. space. Most of the high volume offerings are based on meal components and pre-prepared sandwiches that come from a central production commissary and are finished off with condiment options or toasted in a high-speed oven.

Because some made-to-order items are always on the menu, it gives the illusion that most of the offerings are prepped onsite, even though the space has no real prep area. The illusion that it does is encouraged by the prominent display of component ingredients in a refrigerated counter well unit. In fact, the area “behind the wall” is little more than a narrow aisle with a desk used for ordering and limited paperwork.

“We want the customer to see fresh food, fresh ingredients and preparation in front of them, even if that preparation from a technical standpoint is actually more of a finishing procedure,” says Vessillo.

Simply Puur's breakfast menu will typically include a hot breakfast bar along with grab-and-go sandwiches, pastries and a fruit bar offered from an island station in the center area. Lunch offerings include a choice of daily soups, a salad bar set up on the center island, daily specials from a chef's entrée station geared to small batch production from prepped component ingredients and hot, toasted deli sandwiches.

There is also a well-stocked grab-and-go refrigerated case with Outtakes-branded cold sandwiches, beverages, and pre-packaged items like yogurt and parfaits and a Dunkin' Brands coffee station. Packaged retail snacks are merchandised in wall racks near the café entrance and by the cashier stations.

In terms of equipment, cooks rely on the high-speed oven, a combi oven and griddle/grill. Ingredient storage is provided by the cold well and under-counter refrigerated cases. A small side room (really no more than a narrow closet) contains mobile refrigerated coolers and a freezer. The design is modular, to permit a space to be scaled up with a second finishing station if required.

A Simply Puur site would typically receive daily deliveries of component product from a regional commisary, with a day and a half's production needs on site at any given time. Compass already operates five of these that are associated with its Canteen and Morrison divisions and which have established logistical systems for regional distribution.

If the approach goes well, the company also has the option of tapping production facilities run by some of its Canteen franchise affiliates. Vessillo says the company is also working with some suppliers to provide products that are pre-prepped for fresh finishing on site.

Healthful meal choices represent a major component of the Simply Puur menu mix, according to Vessillo, and should prove popular with B&I clients that are showing increasing interest in wellness programs. One concept that may well become part of Simply Puur's offerings is the Whole+Sum program Compass has been testing at some of its large B&I accounts, a menu based on entrée and side components that can be mixed and matched to provide a meal with under 600 calories. In the Simply Puur context, these items also would rely on commissary production.

Despite the use of the Outtakes sandwich brand, Simply Puur is a complete departure from that earlier program, Vessillo says.

“Outtakes was a small c-store solution largely designed as a single employee, grab-and-go operation,” he says. “In practice, though, Outtakes customer and client demand has often been for more fresh food. While we were able to add that option in some cases, it really wasn't designed for that. Simply Puur will give us a branded fresh-prepared model that provides a great experience for the customer while allowing operational flexibility and efficiency.”

Although Vessillo will not speculate on how applicable Simply Puur might be in other segments, it is easy to see how it might be employed in other locations like hospitals, community colleges or late night service locations in higher education.

Still, “the operating challenges for small sites in general are very significant,” Bheemarao admits, “especially if you are committed to giving quality product and consistency to the client and customers.”

Simply Puur's success in these areas, as well as in generating the tightly-managed operating costs Compass is counting on, will be the measure of how attractive the concept appears to its potential client base.

Will the initiative work? Compass is clearly placing a significant bet that it will, and one can assume it is an initiative that will be closely watched by those both inside and outside the company.