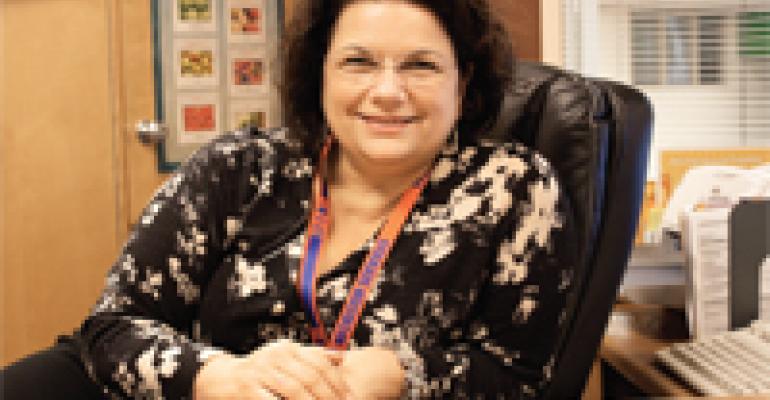 Portland, Oregon receives more than 36" of rain each year, but the foodservice program in its schools is anything but all wet. In fact, it's moving so fast, the rain falls mainly on the local foods it buys, prepares and serves.

And for Portland Public Schools (PPS), what has consistently driven decisions is data. The decision to open its central kitchen nearly three decades ago, to close it more recently, on how to reorganize operations, and even the right way to design menus that feature locally grown and processed food are based on hard numbers. So it comes as no surprise that they are also pioneering new concepts in how to use data day-to-day.

In 1980 Portland was in the vanguard of school foodservice, building one of the nation's first central kitchens based on a cook-chill system.

Kristy Obbink remembers it well. She had started working for the district the year before in a career shift after her initial years as an administrative dietician in healthcare. Bob Honson, a co-worker when Kristy started and soon to become the district's foodservice director, was tasked with getting the new kitchen up and running. (Honson retired in 2004 after more than twenty years in the FSD's position.)

Note: PPS has the shortest public school year in the country, 169 serving days, which affects the distribution of of the district's fixed costs. The district offers a summer feeding program at about 35 sites.

There were two reasons Portland opted for building a central kitchen. The first was that the district had decided to build new administrative offices: by including the kitchen in those plans, it was possible to offset some of the construction costs with foodservice funds. The second and more important reason: central production analysis numbers clearly indicated that the district could save money by closing many of its individual school site kitchens. The move was definitely data-driven.

“Cook-chill central kitchens were a new concept, and we were learning along the way,” says Obbink. One learning curve began immediately, when the district decided not to hire specialized staff for the new food manufacturing facility. Instead, it chose to train existing staff from the original decentralized kitchens to take on the new responsibilities.

In retrospect, that may not have been such a great idea. The first batch of spaghetti made in the gigantic kettles, bagged and quick-chilled, came out like “pink mush” because the pasta wasn't correctly specified or prepared for use in the new cooking process. But, over time, the department got such procedures right and a whole lot more. Honson went on to win the prestigious IFMA Gold Plate Award.

As many districts have come to realize, cooking is a costly enterprise. While some districts that had moved to central production are considering a return to the site-based, cook-from-scratch menus some local communities are demanding in the name of health and nutrition, the reality is that they then lose the economies of scale central production offered.

On the other hand, for districts that write tight and nutrition-based specs, prepared items from a manufacturer need be no less healthful or acceptable than district-cooked items. Many districts have also found that it is growing harder to recruit and maintain staff with the skills needed for volume food production, and to ensure that all items are prepared consistently for quality and safety. That also has become a factor encouraging districts to turn more frequently to high-quality processed items.

That was the case in Portland. In 2004, the year Obbink became director, she took a hard look at the schools' menus and discovered the department had already moved away from many of the items originally produced in the central kitchen. She also found herself in the position of having to re-evaluate many of the other factors that had led PPS to the central production model.

For one thing, district administration had come to believe that the main building it occupied represented a potentially valuable piece of real estate. It had made a decision to to investigate the property's sale, along with a plan to relocate district offices. Because the central kitchen was an anchor weighing down that decision, the administration had also decided to close that facility and investigate whether outsourcing the meal program or its production might be part of a solution.

Honson had retired the previous year and, with a newly appointed director in place, it was a good time to make big changes, they thought.

Newly promoted, Obbink was up to the challenge. She helped the district put together a Request for Information (RFI) to see what alternative possibilities might exist. At the same time, she worked with PPS Nutrition Services Department to develop an in-house proposal based on a major re-structuring of the school nutrition program.

A major premise was that the decision to close the central kitchen was a done deal; other changes included increased use of pre-prepared food, for the most part finished off at the school sites, with relocation of and some reductions in staff. All told, the plan projected that the district would be able to achieve savings of a half million dollars a year. And, by eliminating the need for the central kitchen, freed the district to investigate the sale of the main site property.

It was the best solution the district received and was the one it adopted. Today, the school nutrition department is thriving, although the district still occupies the same facilities. (The cook chill equipment was sold, and, at least for now, the original kitchen serves to package breakfasts and as a central distribution facility for the schools).

There were other major changes in the works for that chaotic year as well, Obbink recalls. The district education staff was evaluating how to meet newly enacted requirements of the Federal No Child Left Behind Act, targeted to improving the educational outcomes for children. As a district with declining enrollment, PPS was looking to consolidate its locations, combining elementary and middle schools into K-8 education centers.

Finally, careful evaluation of USDA's newly-required Local Wellness Policies showed that school foodservice a la carte sales as they existed in Portland, would soon need to become a thing of the past. Taking the lead, Obbink eliminated virtually all a la carte food sales, focusing the department's attention on improving and marketing healthful reimbursable meals.

“It's what we do best,” says Obbink. “It's also hard to determine the true cost of an a la carte program,” she adds. “We know exactly what it costs to produce a meal, but distributing all costs down to the item in an ala carte program is very difficult.”

The results? As one might expect, implementing so much change in such a short period had a cost. In its first year, the district's foodservice program ran about $900,000 in the red. But as the program was fine tuned over the next three years, it recouped the loss and a million dollars more, ending the 2007-08 school year with a 1.2 million dollar fund balance, the one-month operating cost cushion that is its goal.

Among other savings, Obbink reports that better management of the program's supply chain and main freezer facilities has helped it reduce outside storage costs by nearly $150,000 a year. “We also invested in some small, reach-in freezers for the school sites. That helped us to go from daily to twice-weekly deliveries, with logistical cost savings,” she says.

Obbink says the decisions made in 2004 “have allowed us to focus on improvements to the meal program,” and have had positive results overall, although she acknowledges the pain of the staff reductions that were entailed.

“We worked closely with our union, SEIU, to find the gentlest approach. We offered all employees positions, although many of these involved fewer hours than they'd had before.”

Since then, the increased focus on reimbursable meals has allowed PPS to more fully embrace the state's well-known commitment to the environment and sustainability. Emphasizing more healthful menus and buying more locally produced products, including produce from organic and sustainable farms, have helped PPS make its program a natural extension of the community ethos.

In doing so, Obbink worked closely with parents, faculty and staff at each of her schools. As an example, at Abernathy Elementary School, Linda Caldwell is a parent, chef, and manager of the school's garden project, “The Garden of Wonders.”

In it, students engage in garden experiences outside as well as in an indoor garden classroom. They learn about healthy eating supported in a scratch kitchen where meals are prepared daily with fresh local produce.

The project works at one level, but less so at another. Because of the active partnership among parents, administrators, faculty and staff of the district child nutrition program, it is achieving the goal of improving student awareness of more healthful food, where it comes from, and the relationship between nutrition and success in school.

At the same time, the program costs more than the revenue it generates and is not replicable without increased funding. Further, issues related to compliance and accountability require added oversight and management to ensure that meals served in this fashion meet federal guidelines.

Obbink knows this because her data system paints a pretty clear picture of each school's performance. Even with the intense focus on good nutrition provided by the campus's commitment to the project, participation at Abernathy hovers just over 50%.

So while Abernathy has not become a template for the rest of the district, PPS has been able to adopt many of its core concepts in its Eat. Think. Grow. program (see sidebar). This includes a “buy local” philosophy and other ideas as espoused by The Omnivore's Dilemma author Michael Pollan.

Pollan thinks America should use school meal programs as a learning lab for teaching healthy eating to kids, and Obbink agrees.

“I have always believed that we should consider the cafeteria as another classroom,” she says. “Our Eat. Think. Grow. approach takes that view and is our district's answer to demand for better K-12 wellness education.”

Barry Sackin is principal of B. Sackin & Associates school foodservice consulting firm. Previously, he was a foodservice director for the Anaheim (CA) public schools and staff vice president for public policy for the School Nutrition Association.