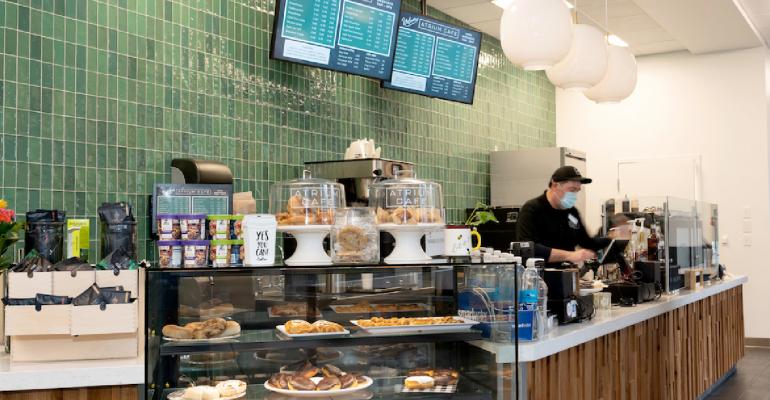 The 36-story OneAmerica Tower, the second largest office complex in downtown Indianapolis, lost its onsite foodservice in fall 2020, a victim of the COVID pandemic that basically turned the once bustling district into a ghost town. But now, the area and OneAmerica Tower are slowly coming back, and as they do, they have a new foodservice option designed to meet the dining needs of today’s and tomorrow’s workplace environment.

That option comes courtesy of FM Top 50 firm Quest Food Management Services and consists of two outlets, the Atrium Café and the Atrium Market, both located in the building lobby as to be easily accessible by both OneAmerica Tower tenant employees and walk-ins from surrounding office buildings. For a photo tour of the operations, go here.

The Atrium Café is a bakery/coffee shop with extensive grab and go options that opened last November as OneAmerica Tower tenant employees began filtering back to offices. It was followed the next month by the partial opening of the Atrium Market, which “we are slowly ramping up to capacity as more people come in,” says Quest District Manager Rachel Brown.

The Atrium Market incorporates a deli station, a salad bar, a made-to-order grill, a pizza station with a wood-fire pizza oven and a homestyle station featuring entrees of the day.

On the way is a retail market that will sell not only food but also wine and beer, Brown adds. Its hours have not yet been set but it will probably stay open until late afternoon to give employees a chance to grab something, including take-home meal kits, before heading out. 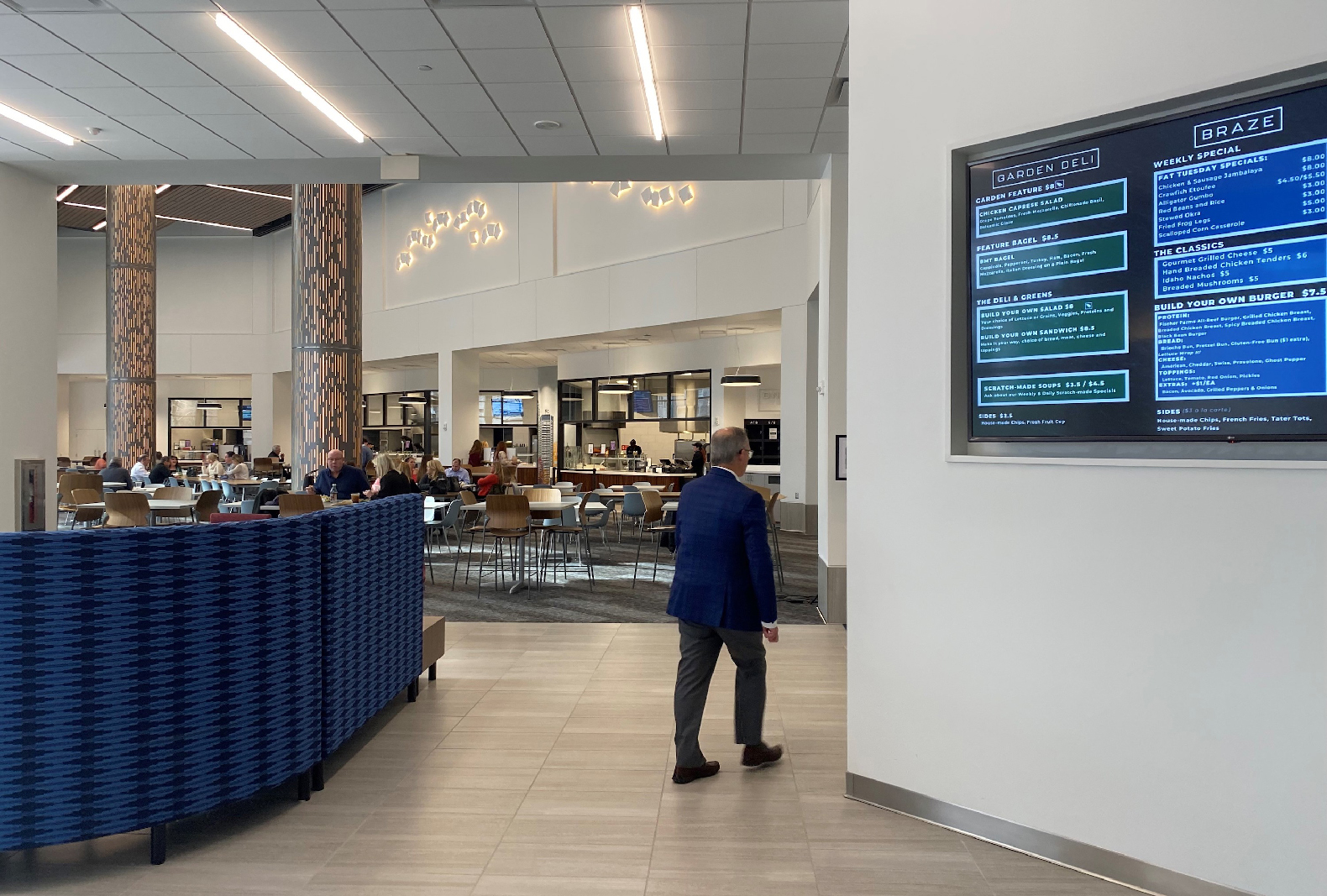 The Atrium Market features fresh food serving stations, all with assemble-to-order or made-to-order options, rotating menus with weekly specials and a core menu of always-available favorites.

The food stations offer rotating menus with weekly specials based on factors like seasonality and the availability of seasonal items Quest can source. These are supplemented by a core menu of favorites that are always available, such as a meat lovers pizza at the pizza station.

The Atrium Market opens for full-service breakfast at 7:30 a.m. daily, offering a hot breakfast including a made-to-order omelet bar, followed later by lunch service until 2 p.m. The Atrium Café also opens at 7 a.m. and goes continually until 5 p.m.

Quest also offers a mobile order option, which currently sees only sporadic use as most customers seem to want to experience the new dining service environment when ordering, “Traditionally with many of our other concepts that are similar to this, the online ordering eventually became more popular than having to come down and wait, and we expect that to happen here as well,” Brown offers.

Quest President Nick Saccaro agrees, noting that the company had a similar experience with its Farehouse Market operation in Chicago, also a brand new space that tended to attract customers to the venue in the early going even though a mobile order option was available.

“I think since [OneAmerica] did such a huge remodel of the Atrium and everything, a lot of people, after being gone for so long, just want to come and see it with their own eyes,” he says. “As people start to settle in, we’ll probably start to see more online ordering taking place.”

Saccaro characterizes mobile ordering not as an optional premium service but rather as the “ante” an operator must offer in today’s market to accommodate customers looking for convenience or who are hesitant about going into crowded spaces. 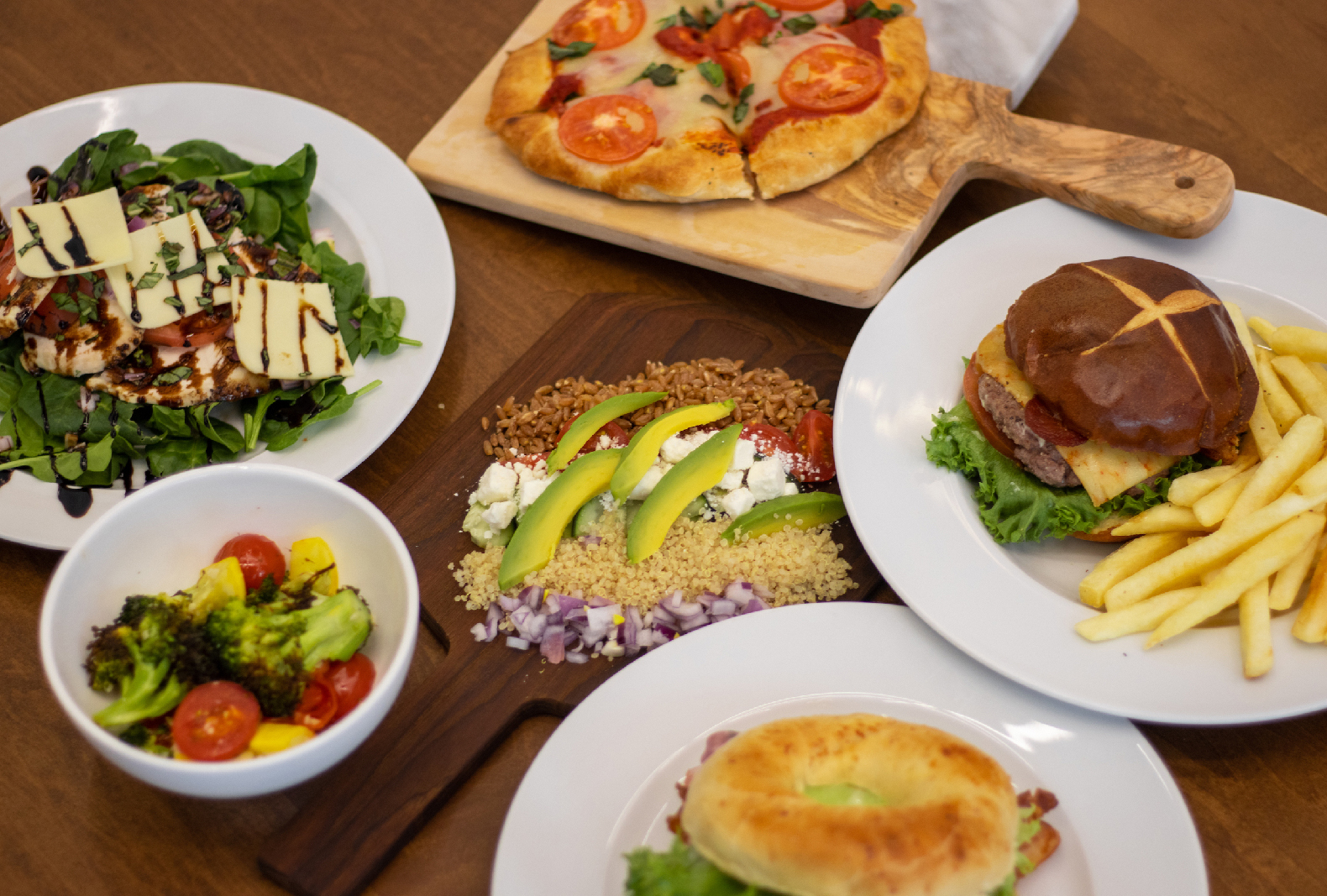 Another draw in the Atrium is the seating and communal space designed by OneAmerica specifically to encourage interaction and socialization. “They want to see it be a big community draw, a big gathering space and I think they see this as a cornerstone of getting people back into the building,” Brown suggests.

Saccaro says Atrium’s hours are dictated by when people are in the building, but that can be extended if the landlord or tenants want it to. “If we find that there is a shift in thinking about bringing the public in after hours, our ability to convert that market into a kind of self-checkout [operation] with just minimal labor there to support it is a very easy thing for us to do.”

“It’s like totally different ends of the spectrum,” he explains. “On one end, even people coming back to the office are not necessarily staying as long during the day or as many days, so we have to prepare for folks being in an average of 3-3.5 days a week instead of five, and that’s going to change our space requirements, how we use space, how we use labor and how we plan for production. Also, when people do come in to the office, they may only be coming in for two or three meetings and then going home instead of staying in all day long, so they may need to have [food] options available at 10 in the morning or four in the afternoon versus just being there for the lunch hour.”

That’s one end of the spectrum, he says.

“On the other end, it seems that, pre-COVID, there were a lot of people eating lunch by themselves just to get a break in the middle of the day, but now it seems like those who want to eat lunch see it as a community building event, sitting with friends or colleagues, and maybe taking a little longer to have some time together. So, as operators, we need to meet the needs both of people who just come in for a few meetings and might just want a coffee and snack, and those who want to sit, hang out and enjoy time together.”

In addition to operating the Atrium Market and Café, Quest also provides catering in the building. It had scheduled a number of events that ended up being put off for a time due to the Omicron surge. The company will also soon begin to promote its catering services and in-house venues to potential clients outside the building.

Saccaro suggests that the potential for such business may be considerable once the pandemic subsides, noting that the previous building foodservice provider had been doing “well north of” $1 million a year in catering before the pandemic, and that the quality of the food Quest is serving in the Atrium Market is already working as a preliminary marketing tool drawing interest from surrounding businesses.

But the potential of the Atrium operations to serve downtown Indianapolis’ emerging business dining environment extends beyond its current foodservice function and even beyond the potential catering opportunities.

“There are some things about this space that will make it stand out in the downtown Indianapolis market,” Saccaro suggests. “One is coming out from behind the mystery door. There’s so much happening out front in this space—we have assemble- or made-to-order at virtually every station—that I think it really lends itself to a different level and degree of perception of freshness and customization than is available elsewhere in older facilities close by.”

Also, the positioning of the coffee bar in a high-traffic area that allows it to operate independently of the Atrium Market helps provide a welcoming atmosphere especially in the mid-morning and late afternoon, “so you don’t feel like you’re walking into something that’s half closed down,” he adds. “Between the coffee bar and the Market, just the hours that we will be able to serve people goes beyond just serving breakfast and lunch, and in today’s work environment, I think that’s going to be absolutely crucial.”

Other factors he cites as making the Atrium operations unique in its location and inviting going forward include the pizza oven as a visually striking center point of the space, the convenience of having remote ordering to avoid lines as traffic and crowding increases and the comprehensive retail component with its wide selection of grab and go items to accommodate customers in a hurry but still wanting quality options.

“That combo of market and food hall is something we’ve seen in some other major markets but not in Indianapolis, especially in a corporate dining setting,” Saccaro offers.

Attention to the future work culture with its dual need for convenience and socialization played a critical role in the design of the space for OneAmerica.

“They did such an amazing job with the seating, the lighting—there’s so much natural light already in the seating area and café,” Saccaro exudes. “It’s one of the nicest, most welcoming, comfortable, interesting places to just sit and enjoy a meal. It also solves a lot of issues—service throughout the dayparts, seating environments to which you can go either by yourself or with a team of people, a lot of freshness, the mobile order option. There really aren’t any boxes that are unchecked.”