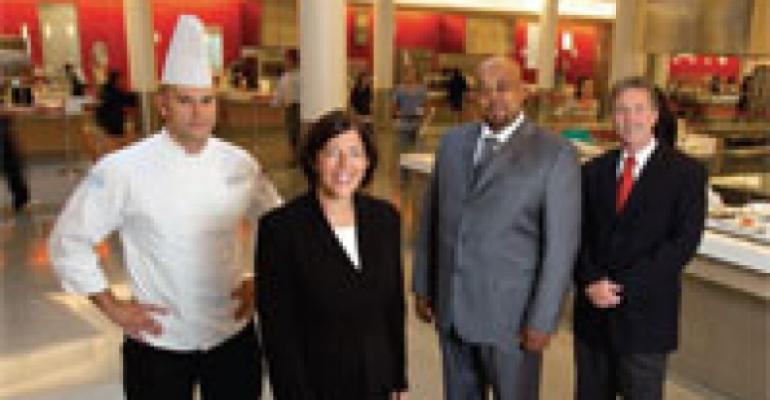 Why the Block Rocks at NEU

In the heart of Boston&#8230;Northeastern University realizes over $25 million in foodservice sales, more than 40 percent of that from retail and voluntary block meal plans.

A strong testament to the success of any college dining program can be found in the sales it rings up from voluntary meal plans and retail cash purchases. This is especially true for urban schools, where off-campus housing and restaurants are readily available and the perceived value of on-campus meal options must compete with all comers.

Northeastern University, just blocks away from Boston's heavily touristed Back Bay neighborhood, is a case in point. It rings up almost 40 percent of its over $25 million in managed foodservice volume from retail and voluntary block meal plan sales, with participation rates growing year after year.

One of many reasons why can be seen in NU's International Village, a 20,000 sq.ft. dining hall that opened a year ago in its new, 1,200 bed residence hall. The LEED-Gold certified facility operates two 3-Star Certified Green restaurants and is a showcase for the school's residential facilities and its commitment to sustainability.

But even as the Village is new and highly trafficked, it doesn't seem to have detracted from NU's other dining operations, which have received regular attention and upgrades over the years. One of them, Levine Marketplace, remains the highest volume location on campus.

NU's dining program is overseen by two NU co-directors, Maureen Timmons and Michael Vigna. Both began their association with the school as employees of daka, a regional contract services provider that operated NU dining in the 1980s.

Timmons had been a general manager for a regional restaurant chain and then joined daka as a director of quality assurance and training. That led to a role developing dining standards for NU, and two years later, to an invitation from the school in 1996 to work for it directly. That was shortly before the school began planning its major renovation the Stetson East dining hall.

SUSHI UP AT THE BAR. One of many options at International Village.

(After daka's contract services group was acquired by Compass in 1997, Chartwell's assumed the contract and has provided the school's dining services since then).

“Mike and I are contract managers, but also internal consultants,” says Timmons. “It is our job to be food and service experts and to make recommendations to the university in terms of dining operations, contract management and facility needs.”

Although responsibilities of the two overlap to some degree, both have major areas of specialization. “We watch out for each other's interests,” adds Vigna.

Timmons, who describes herself as a “serious foodie” (she has undergraduate HRI and Master's degrees from Johnson and Wales, a culinary degree from the CIA and will complete an education doctorate at NU in 2012) also collaborates with Chartwells staff on concept and menu development.

Under the direction of Bill Mallon, NU's director of business services, the two share responsibility for managing the mix of almost two dozen dining service contracts, including the complex, modified P&L contractual relationship that has evolved between NU and Chartwell's over the past 20 years. They also co-chair the student dining advisory committee, comprised of representatives from all of the major student groups on campus.

Timmons will tell you that the core of the University's — and dining services' — mission is a commitment to continuous improvement.

“The status quo is never the goal here,” she says. “When we finish a project, it is not about being finished, it is about ‘How can we improve?’

“Our other mission is to represent students' interests in respect to the dining program, and these two concerns provide a mission alignment with our contract providers.”

ON THE GO, NEU’s main c-store, is located in the Curry Student Center food court. and features freshrolled sushi, grab-and-go and sundry items.

Views of the recently refreshed main servery of Levine Marketplace.

Northeastern has a total enrollment today of almost 28,000. Over 18,000 are undergraduate students with more than half living on campus. But its identity as a residentially-focused campus is fairly recent. For most of its first century NU operated primarily as a commuter-based institution.

Founded by the Boston YMCA in 1896 as an engineering and business school, NU by the late-1940's had significantly expanded physically and academically, had been recognized by the state as a university and had established independence from the Y. But most of its student base continued to come from and live in the Boston community.

In the late 1980s the university made enhancing its academic residential community a strategic priority. Over the next two decades it added programs, built a new science and engineering center and focused on establishing itself as a national research center. Dining services moved aggressively to support this commitment to residential growth.

Outtakes, a grab-and-go takeout concept located in between the Stetson East and West dining halls, caters to students who are on the run.

In 1990, about three quarters of the student population fit the commuter profile. There were about 4,000 resident students then; today there are about 10,000.

“In 1990, we consolidated five dining rooms as a move to drive efficiency,” says Vigna.

After the consolidation, most dining took place at Stetson West and Stetson East (now known as Levine Marketplace), which share a central kitchen. In subsequent years, NU renovated both halls to make them more attractive physically and to convert them to the exhibition cooking and marketplace style food presentations that were then fairly rare in the college enviornment. The quality and number of retail satellite operations expanded at the Curry Student Center and elsewhere on campus.

“My philosophy is like the old Disney rule,” Vigna says. “If it doesn't look new, either paint it or replace it. In foodservice, that helps enhance student life and supports our focus on retaining students for a full undergraduate term.”

As housing was added, many of the new units designed for upperclass students had their own kitchens, and one of NU's other initiatives was to contract with local grocer Wollaston's to operate two on-campus grocery stores for them.

As at many schools, 10-19 meals/week plans are mandatory for freshmen living on the campus, but optional after that. Block plans — known on campus as “Profilers,” were introduced in 1999 as a way to give upperclass students, faculty and commuters another pre-paid option if they wished to dine on campus.

They're good for 25 to 110 meals over the course of a year at select eateries, and sales of them have been growing ever since their introduction. “Husky Dollars” provide additional debit card cash credit and can be used anywhere on campus and at around 100 on- and off-campus locations as well.

Chartwells manages most but not all of the more than two dozen points of service on campus. The exceptions include several local restaurant chain units on the first floor of the school's Marino Recreation Center building and two Wollestan's grocery stores (one located at Marino and one in the upperclass resident West Village B area).

The campus' largest foodservice volume occurs at three residential dining halls (the new International Village facility and Stetson East and West) and at the Curry Student Center in the middle of campus. The dining halls are geared primarily to those with meal plans, while the Student Center is mostly retail and a la carte oriented. All accept cash, debit/credit cards and dining dollars.

Other forms of purchase flexibility are also offered wherever possible. As one example, the Curry Student Center's retail offerings (from On the Go, the campus c-store, and several quickservice franchises held by Chartwell's) are augmented by The West End, a compact station with hot and cold menu choices ranging from staples like mac ‘n cheeese to daily specials, which in September, began accepting the use of meal plans.

Hot beverage operations across campus cater to every taste. A large, full service Starbucks coffee house and lounge is housed in Curry. Two highly popular Dunkin Donuts franchise operations on the east and west side of campus ring up $1.5 million annually. And a combination Jamba Juice/Peet's Coffee & Tea operation provides yet another option just outside of the International Village eatery.

Other points of service include Outtakes, a grab-and-go takeout concept located between the Stetson East and West dining halls and NU's 716 Concept (a coffee/bakery operation) and Faculty Club, both located in its administration building.

For the longer term, Timmons says the school is looking to take the Curry Center food court to a higher level. That will mean re-evaluating the restaurant brands currently offered there and a “more cohesive” design for the space. “We are also looking seriously at options for operating a mobile food truck on the campus,” she adds, indicating that could provide additional flexibility for late night dining needs.

Beyond that, “I believe that we have a responsibility to educate students about food, cuisine and culture,” says Timmons.

“When students arrive here they already show a great deal of interest in food — they can tell you which cooking shows they watch on TV; they have favorite ‘rock star’ chefs; and they have often traveled widely. One of our goals is to better inform those interests and to improve their food literacy, to expand their understanding of how food relates to global culture.”

To view an animated slide show portraying the NEU campus dining facilities, go to food-management.com and click on the “Web Exclusive” button.