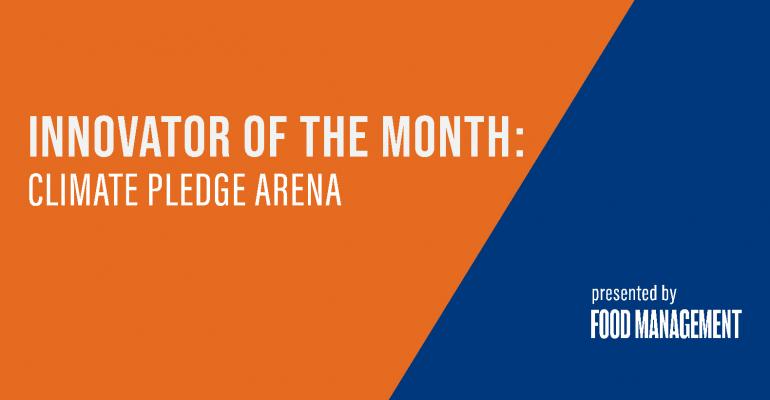 Amazon’s choice to use the term “climate pledge” rather than its own corporate brand in the facility name gives a broad indication of the sustainability philosophy behind its operations, which are governed by its status as the first-ever net Zero Carbon certified arena in the world.
Onsite leaders>FM Innovators

Climate Pledge Arena (CPA) in Seattle’s Seattle Center entertainment complex is a new/old sports facility dating its origins back to 1962 that served as the home of the NBA’s Seattle Supersonics (now the Oklahoma City Thunder) and was known as KeyArena when it closed down in 2018 for a complete renovation.

That renovation is now mostly complete and the facility—renamed Climate Pledge Arena by Amazon, which purchased its naming rights last year—is ready for its closeup, which will begin Oct. 22 with a concert by Coldplay, followed the next night by the home debut of the new NHL franchise the Seattle Kraken. The arena is also home to the WNBA’s Seattle Storm when it begins its 2022 season next spring.

In its new guise, CPA is a completely different sports arena from its KeyArena days. Amazon’s choice to use the term “climate pledge” rather than its own corporate brand in the facility name gives a broad indication of the sustainability philosophy behind its operations, which are governed by its status as the first-ever net Zero Carbon certified arena in the world. 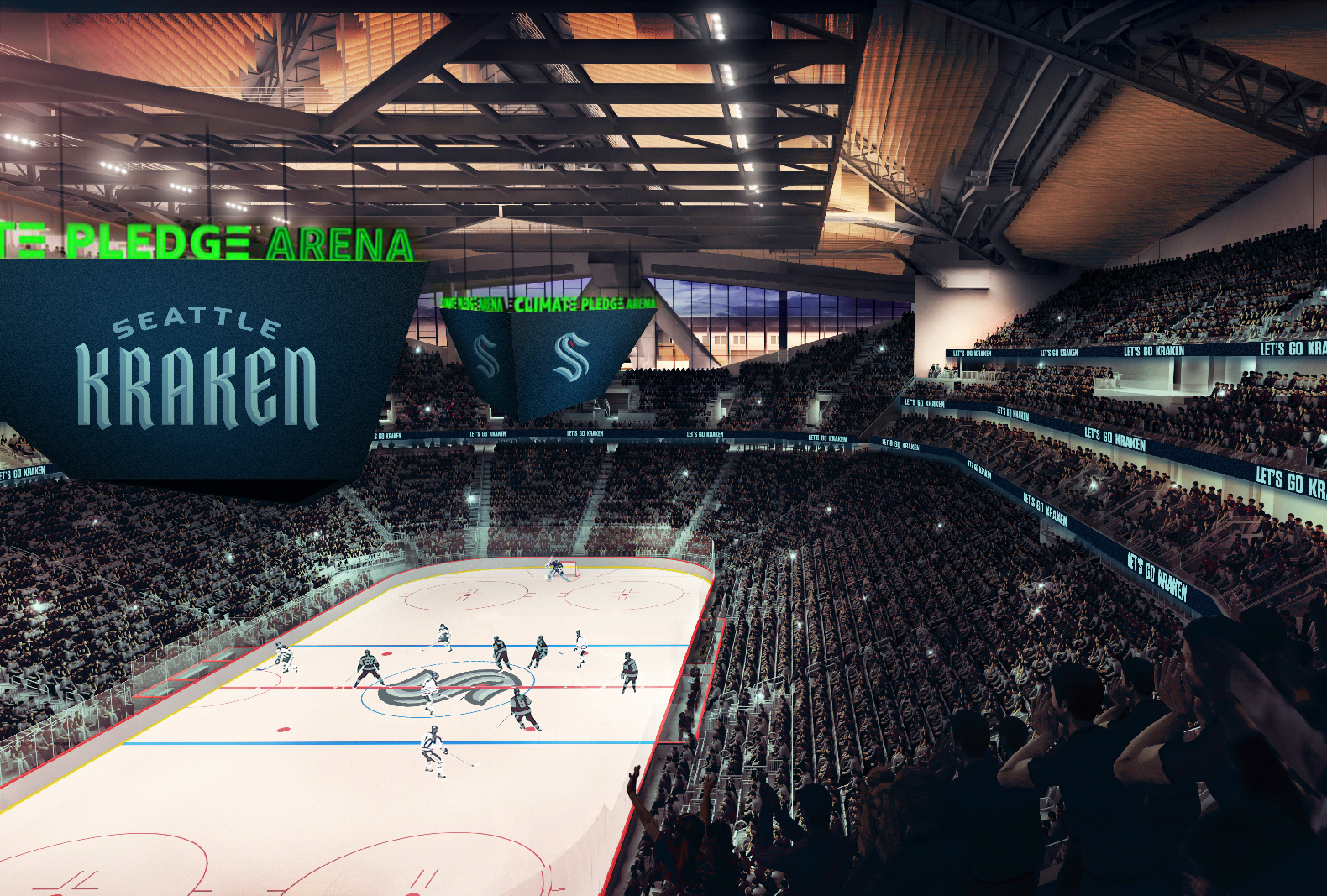 Climate Pledge Arena will open Oct. 22 with a Coldplay concert followed the next night by the home debut of the new NHL franchise the Seattle Kraken. It will also be home to the WNBA’s Seattle Storm when the team begins its 2022 season next spring.

Related: Outside influences: lessons from restaurants and food retail

Maintaining that commitment is the role of Delaware North, which was named the arena’s exclusive food and beverage services partner earlier this year with a mission to play a significant part in building The Climate Collective, CPA’s unique food and beverage program featuring curated vendors, local ingredients and partners that capture the spirit of the Pacific Northwest.

“‘The Climate Collective’ will be an innovative, sustainable, fan-focused food and beverage program that brings all of the flavors of the Pacific Northwest to life," said Steve Mattson executive vice president and general manager of Climate Pledge Arena, in announcing Delaware North’s selection as F&B partner. "I've worked with Delaware North for many years and know firsthand how invested they are in our success at Climate Pledge Arena. They will help us never lose track of what's most important—our fans.”

To head its team, Delaware North tabbed Steve Dominguez as general manager and Molly D. De Mers as executive chef. Dominguez has an extensive background in sports facility foodservice, most recently having served as a district manager overseeing operations at T-Mobile Park, Seattle’s Major League Baseball ballpark, since 2010, and before that spent 10 years in leadership roles for Aramark at sports venues such as Denver’s Coors Field, Cashman Field Complex in Las Vegas and Angels Stadium in Los Angeles.

De Mers, the first female executive chef for a new major professional sports venue at opening, comes to CPA after three years as executive chef at Seattle Aquarium, where her focus on sustainability helped the property become Leadership Status-certified through the James Beard Foundation. She has also held executive sous chef or executive chef roles at high-volume destinations such as the San Diego Convention Center and Denver Convention Center. 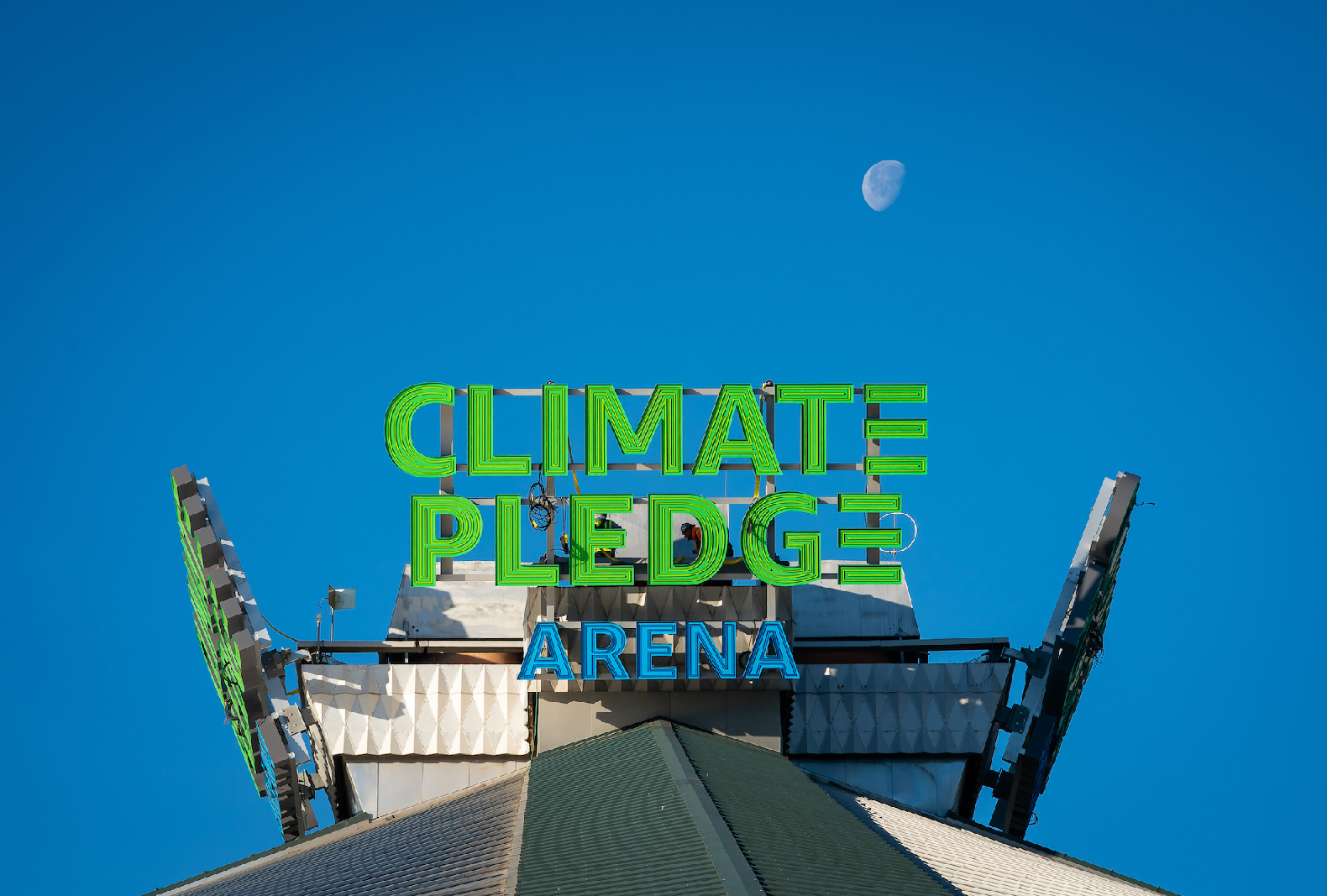 Amazon’s choice to use the term “climate pledge” rather than its own corporate brand in the facility name gives a broad indication of the sustainability philosophy behind its operations, which are governed by its status as the first-ever net Zero Carbon certified arena in the world.

For the F&B operations, the sustainability focus and Zero Carbon status require a number of commitments, including sourcing 75% of food ingredients from within a 300-mile radius and house wines and craft beers from either Washington or Oregon. Other commitments include using certified USDA Organic produce where applicable as well as 100% cage-free eggs, seafood meeting Monterey Aquarium’s Sustainable Seafood Watch rating, antibiotic- and hormone-free protein and 100% grass-fed beef where applicable, Rainforest Alliance or Fair Trade certified coffee and only heart-healthy oils.

“We’re sourcing from a 300-mile radius,” Dominguez confirms. “Fortunately, being in the Pacific Northwest, we have an abundance of choices. It also means that we source all our food from sustainable [providers]; for example, the beef comes from farms that maintain sustainable practices, so it’s not just ‘Hey, we found a great product that comes from within 300 miles of Seattle!’ it’s also one that comes from a source that has the environment and the climate on its mind.”

That poses some challenges in procurement, he admits.

“Once you start peeling off the layers, you realize that a climate pledge is a big pledge, and not something that’s just easy or willy-nilly but something you have to put an extreme amount of thought into,” he says. “For example, we spent a lot of time trying to source snack items such as candy bars with compostable packaging, to the point of trying to repack stuff. The industry is just so set up right now for mass produced and are not really conscious about their packaging.”

De Mers cites the challenge of balancing the climate commitment with customer satisfaction in creating menus.

“In this industry, we’ve always been a creature by design of giving our guests exactly what they want when they want it, but now we’re having to communicate that sustainability means eating in season. Navigating that, especially post-COVID when a lot of our industry is hurting has [been a challenge], but fortunately we have such a great, solid team that is able to work through that because we understand the seriousness of [the issue].”

Ironically, the local focus has actually been somewhat of an asset at times, Dominguez notes.

“When your chicken or beef is coming from Royal Ranch some 200 miles away, it’s a little easier to get relative to something from the Midwest,” he suggests. “The majority of ingredients coming from the local side have not really affected our menu development. We haven’t had to say, ‘Wow, we can’t sell that because we can’t find a sustainable protein or packaging for it.”

In fact, he adds, the product available locally even tends to be of higher quality generally—many coming with premium attributes like being organic—without necessarily being much more expensive than mass-market alternatives.

Of course, seasonality might be an issue for menu creation during the NHL season, which extends over the winter, but De Mers says the alternatives available even in the coldest months are sufficient to produce attractive seasonal menu choices.

“We do have some fruits that are year-round that we use over the winter, and then we also like to highlight the root vegetable season,” she says, adding that the summer bounty is also available in the forms like pickled vegetables and fruit jams. The Northwest, of course, has some regional bounties over the course of the year—stone fruits like cherries, peaches and plums as well as Walla Walla onions and of course apples—that can be incorporated into menu items in various forms even in the winter.

As for food and kitchen waste, De Mers says the goal is to minimize that as much as possible.

“We utilize a nose-to-tail philosophy where we try to use [the whole item], such as pickling watermelon rinds or turning carrot tops into chimichurris.”

Meanwhile, in terms of sustainable energy usage, the building is almost all electric, with the only gas line being for refrigeration, and CPA is also a solar panel property that generates renewable energy, so food production is exclusively done with electric equipment that leaves no carbon footprint.

In the concessions operations—which Delaware North terms “Marketplaces”—the need to reduce contact and perhaps make due with fewer workers, given the ongoing labor crunch, has resulted in increased use of technology.

“Our Marketplaces, in a very intelligent way, are using self-order kiosks because we may not be able to get 10 cashiers, but we can put eight self-checkout POS and manage that with two people, should we have to,” Dominguez explains.

There will also be four food and beverage outlets utilizing Amazon’s Just Walk Out technology where customers—once checked in either with a credit card or biometric palm ready—can simply take what they want and leave with no stop to check out as the system automatically charges them for whatever they walk out with. Dominguez notes that CPA will be the first arena to offer a hot item with Just Walk Out technology.

Delaware North will also operate catering for CPA’s 59 suites as well as an all-inclusive onsite restaurant and membership clubs.

Customer service will be a big focus in suite service with a concentrated ratio of one attendant for every two suites—the traditional ratio is more like 4-1, Dominguez suggests—and some even with an exclusive attendant.

The catering service will provide guests with interaction with a chef in their suite, “creating a special moment just for you,” De Mers says. “As we get to know our guests, we’ll add a personalized relationship that will make them feel like they’re the only people in the building, and that’s our top priority.”

The menu itself, she adds, will be a mix of popular traditional arena fare with some innovative new creations. “I think when each guest walks in, they will find something [on the menu] that speaks directly to them.”

Specials will include exclusive items themed to a particular event—a special drink incorporating Jack Daniels brand bourbon for Eric Church, who is strongly associated with that whiskey brand, for instance, or a plant-based style menu for singer Billie Eilish, known for her vegan and animal rights activism. For Kraken games, special offering may include items like a special lobster roll for when the Boston Bruins come in or a California roll for the Anaheim Ducks. The Kraken also have their signature Kraken Sausage, which is sausage stuffed with cream cheese, bacon, sauteed peppers and jalapenos and is a very popular local item.

The specials will extend across the arena into the general concessions Marketplaces, De Mers emphasizes, “so it’s not just for the 1% in the suites.” The Marketplaces will also incorporate the local restaurant partners that provide a major boost in both menu diversity and local flavor. Currently, they include regional standouts like Ballard Pizza Co., Asian dumpling concept Din Tai Fung, upscale steakhouse Metropolitan Grill, Elliot’s Oyster House, burger/shakes concept Li’l Woody and Just Poke, known for their fresh poke bowls. All have made a commitment to accord with the sustainability requirements of the Climate Collective food and beverage operation.

“The entire guest experience has been thought out from the moment they purchase tickets to the moment they Tweet or Instagram about their experience,” De Mers summarizes. “We’ve thought through everything—Just Walk Out locations, self-checkout locations, interactive chef pop-up locations where we highlight a chef every 45 days. We’re grilling food on the property, we have curing chambers for proteins, we have our own gelato machine and pasta machine. We’re challenging ourselves in every way to make the fan experience better.”