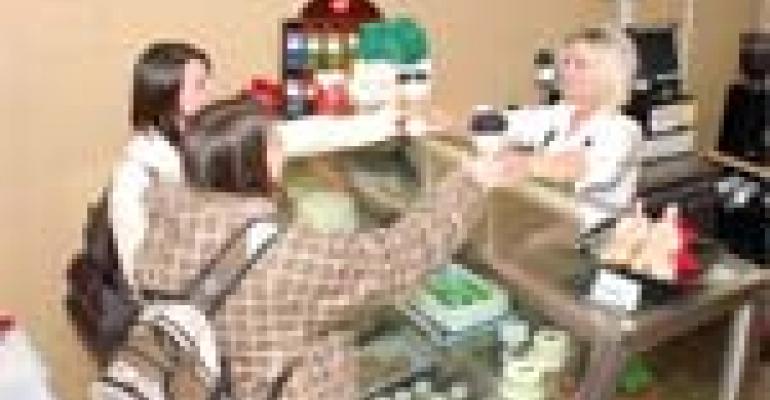 At the new campus bakery café at Carson-Newman College in Jefferson City, TN, you really CAN smell the aroma of freshly baked goodies. That's because, unlike most college bakery cafes, where the display case offers baked goods made elsewhere, the Carson-Newman Bakery (CNB) is the public face of a working bakery that sits behind the counter. At the counter, customers can not only order cakes and other sweets in bulk for take-away, but also single portions of the day's production for personal consumption, as well as gourmet coffee drinks and other beverages.

The idea behind the CNB was to add some direct retail sales for the campus baking operation. “Before we opened the storefront, we would have people call into the bakery to order cakes, a dozen donuts and things like that,” says Rebecca Greenep, dining services director for campus foodservice provider Aramark. “Now, we still have that business, but we also get a lot of students who come by to grab a latte and a donut, or one of the fancy cupcakes as a gift for a friend.

“It also gives people an opportunity to take something nice to the office. In fact, the president's wife is in often to get a bunch of pastries to take to one of the offices,” she adds.

The retail space also lets the bakers display their wares to potential customers and to merchandise catering services. The clientele consists not just of students and college staff but also residents in the surrounding community, to whom CNB has marketed its offerings through fliers and ads.

Greenep says there have been no “town-and-gown” issues associated with this effort. “We are in walking distance of a lot of the area and we get lot of traffic from outside,” she notes. “The community has embraced it very well. In fact, we actually had the local Chamber of Commerce here for our ribbon cutting, which was also written up in the local paper. We enjoy the community coming in and participating.”

The space where the CNB now sits actually was a retail bakery that was closed down around 2002. It was then used for storage by the adjacent bakery production kitchen. Both the kitchen and the retail bakery space are in the basement of Carson-Newman's Stokely Hall, site of the school's main dining hall.

When Greenep took over as director in 2007, she suggested the department revive the retail bakery concept.

“We were really lucky,” she says. “When we removed everything and looked at the space, it still had the showcase and the counter, so all we really had to do was clean it up, paint the walls and decorate it.”

Aramark made a few additions, such as a donut case and an espresso machine, and opened it back up this past June. Since then, word of mouth has helped build customer counts to about 50 a day on average.

It's not an opulent space, nor is it highly visible. “You have to know it's there to find it,” Greenep says. “It's kind of tucked behind the building in an alleyway. To get to it, you have to go down some stairs and into the alleyway. But word of mouth among the students has been building, and they all know it's here now.”

The bakery seems to be busiest in the mid-morning, when students stop by for a quick pick-me-up to tide them over until lunch.

Open from 7 a.m. until 3 p.m. weekdays, the small space has no seating. Greenep says she wants to put some tables, umbrellas and chairs outside the doorway to make a kind of “picnic area.” Students can use their Eagle Bucks declining balance accounts at CNB, along with cash and credit cards.

“We do what we call ‘designer cupcakes,’ Greenep adds. “These are large cupcakes that can take the shape of whatever your imagination can come up with, from a horse to TV dinners to spaghetti and meatballs. One very popular one looks like movie popcorn and it is actually put into a popcorn box.”

The bakers also exercise their imaginations on cakes and cookies. A vanilla frosted donut is a campus favorite, as was an Old World recipe gingerbread cookie (courtesy of one of the bakers) over the past holiday season. Another favorite: the Eagle cookie, which displays the school mascot. The bakers also accommodate individual requests. “Our saying is that if you have a picture, we can make it into a cake,” says Greenep.

While individual sales are growing, special orders and catering are the bulk of the volume. The kitchen supplies the rest of the campus with baked goods and takes care of the bakery end of catering. Greenep says the kitchen's wedding cakes are growing in popularity because the campus offers facilities for receptions that are catered by the dining department.

The bakery added a third staffer when CNB opened, and Greenep says she is now in the process of adding a fourth as volume picks up. It currently produces about eight or nine dozen cookies daily, and some 20 dozen donuts, as well as all the bread, yeast rolls and other standard baked items for the dining hall. There is also another coffee shop on another part of the campus where the bakery's products are sold.

Flavor of the Month: Rhubarb – the fruity vegetable of spring
Apr 19, 2021

25 amazing pasta dishes from food service chefs who are envisioning the shape of pasta to come
Apr 19, 2021