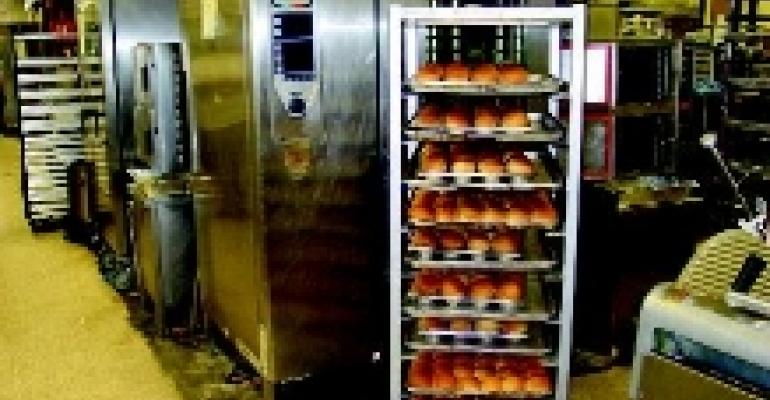 There are two main reasons for creating an in-house bakery. The first is the possibility of lowering your cost of baked goods while at the same time increasing bakery sales and profits. The other is to create a point of differentiation between you and your competitors.

Producing a signature baked product, whether fresh bread or a specialty dessert, will elevate your foodservice operation in the eyes of customers.

While operators in many segments have found that these results are often gained by bringing bakery operations onsite, such results are never a sure thing. You still have to crunch the numbers and make sure that your operation and its traffic volume can support the associated labor and equipment costs. But if onsite baking is a strategy that looks promising, then take a look at a few of the equipment items you'll need to support your program.

Oven types. Ovens are vital for any on-premise baking function, whether it be a traditional or a bakeoff operation. The major types are the rack oven, rotating oven, convection oven and deck oven.

The rack oven, used in high volume applications, will accept racks with 12 or more baking pans in the oven chamber. The rack is mechanically rotated in the oven and gentle convection is used for even cooking throughout the chamber.

In a rack oven, hundreds of rolls can be baked simultaneously and then unloaded quickly and cooled in the same rack used to bake the product. The drawback is that the rack oven has only one large cavity—that means only one type of product can be baked during a given production run. If you're a small operator or you offer a wide variety of baked goods, a rack oven may not be the best choice. Also consider that a rack oven uses a minimum of about 25 sq. ft. of floor space.

Revolving Ovens, often larger than the rack oven, use decks that are rotated like a Ferris wheel through the cooking chamber. Even baking is accomplished by physically moving product through the various temperature zones in the oven, rather than forcing convection. Revolving ovens, used for well over 100 years, still have some applicationsin the modern bakery, but probably not for most small operators, although some newer models are as small as 42" wide.

Deck Ovens. The mainstays of the restaurant bake shop are the convection oven and the deck oven. The deck oven is a must for any real baking because of its well-deserved reputation for producing a superior product.

The standard deck of a deck oven is built of steel and made to hold baking pans. Most of these ovens are also available with a stone hearth for baking "hearth baked" breads and pizzas directly on this special oven deck. A hearth deck acts as a heat sink to store heat, but its temperature is usually lower than the oven air temperature, so the bread or pizza does not burn on the bottom.

The best bakers know the baking patterns and irregularities of each deck. They also know the proper settings to achieve optimum results.

Inherent in the nature of the deck oven is some irregularity in baking from top to bottom and side to side. Since there is no air movement within the oven cavity, there will inevitably be "hot spots" in the oven. Newer ovens have improved in evening the heat through insulation and better thermostats, but for many products, baking pans will still need to be turned or shifted during baking.

Historically, the finest temperature-control ovens have been made in Europe. These ovens have high-quality heating elements, low deck heights to minimize top-to-bottom temperature differences, and heating elements at the top and bottom with separate controls. An experienced baker, and one familiar with the oven, can set what sometimes seems like a maze of controls to produce the most evenly baked products possible.

An option available on most convection ovens is a two-speed fan. The lower fan speed is gentle and is less prone to splatter cake batter or meringues. Some ovens also offer the option of operating the convection fan on a timer, which allows lighter products to set before the fan turns on. Some convection ovens are available with steam injectors, which can be used to keep roasting products moist. Moisture also helps produce a thick crust on some breads. Some manufacturers have recently introduced steam ovens which are suitable for baking.

Mixers and other needs. There are also several other key pieces of equipment you will need in order to do in-house baking. A mixer is a key item needed to mix doughs, batters, and other ingredients for baked goods. Often, the typical kitchen mixer will suffice, but they may not be powerful enough to mix heavy doughs, necessitating a dough mixer or spiral mixer, named for the way the mixing and kneading action is done. In large operations that produce a lot of rolls or bread, a specialty spiral mixer may be required.

A typical kitchen mixer is usually supplied with a wire whip and paddle attachment for mixing different types of products. The paddle attachment will work fine for cake batters, but a dough hook may be needed to mix dough. The dough hook will give full mixing action, even to the sides of the mixing bowl, while mixing the dough with a kneading action. If you expect to produce many piecrusts or flaky breads, which require that shortening be cut into the flour mixture, a pastry knife attachment may also be warranted.

Sheeters. When preparing sheet cookies or biscuits in small quantities, dough is rolled out with a rolling pin and handcut to the shape desired. In larger foodservice operations, rolling dough by hand can be labor-intensive and not as consistent as that produced by mechanical dough rollers. A mechanical dough roller, or sheeter as it's called, consists of a series of motorized rolling pins. The dough is loaded by hand or, for larger applications, by conveyor, into the rolling pins.

A wide variety of sheeters are available. They include small tabletop units fed by a chute that delivers the rolled dough onto a worktable. Larger models have landing conveyors five or more feet in length. More deluxe models have cutter attachments that can automatically cut shapes (like triangles cut for croissants) in the same pass that the dough is being sheeted. Keep in mind that the more sophisticated the machinery, the more staff training will be needed to use it effectively.

Dough Dividers. If you are producing a lot of breads and rolls, a dough divider may be beneficial. The divider allows batches of dough to be divided into equal parts for products like dinner rolls. Mechanical dough dividers take a weighed batch of dough and automatically divide it into a set number of equally sized "balls" to be baked off as rolls. They are available in a variety of sizes and styles.

Commercial Proofers. Yeast breads require "proofing," which is the process of warming the dough to allow the yeast to activate and the bread to rise. Dough will rise most rapidly at temperatures of 100°F to 110°F. Proofing bread at home is often done with the dough in a bowl covered by a wet towel set in a warm place. The same principle is used in a commercial proofer. The cabinets are essentially a warming cabinet with a thermostat to control temperature. Most have humidity control, which keeps the dough from drying out while it is being proofed.

For the small foodservice operator, the oven-sized proofer, which is mounted under a deck or convection oven, is a space-saving idea. These proofers, offered by several manufacturers, use the otherwise wasted space beneath the oven and keep the proofer in close proximity to the oven.

Since baking is a process involving a number of steps, it's essential that the equipment layout be geared to the workflow, even in a small operation, and it's important to consider the relationship of the various pieces of equipment, such as mixers or ovens, when your baking facility is being planned. Plenty of table space will be needed. It's also important to allow sufficient space for cooling products after removed from the ovens.

Butterfly Racks. Standard mobile racks, also known as butterfly racks, are specifically designed for cooling baked goods. They are flexible and can be maneuvered around the kitchen. You also will need to plan for the added load that the bakeshop will give your pot washer.

In summary, there's no question that baking entails extra equipment. The point is that it can also generate additional sales and margins, reduce product cost and provide items that, when wellmerchandised, bring a value-added look-and-feel to your operation. Consider the benefits and costs, study the ramifications and identify the solution that best fits your available space, budget and customer needs.

Dan Bendall , FCSI, is a principal of FoodStrategy, a Maryland-based consulting firm that specializes in planning foodservice facilities. He can be reached at 240-314-0660.