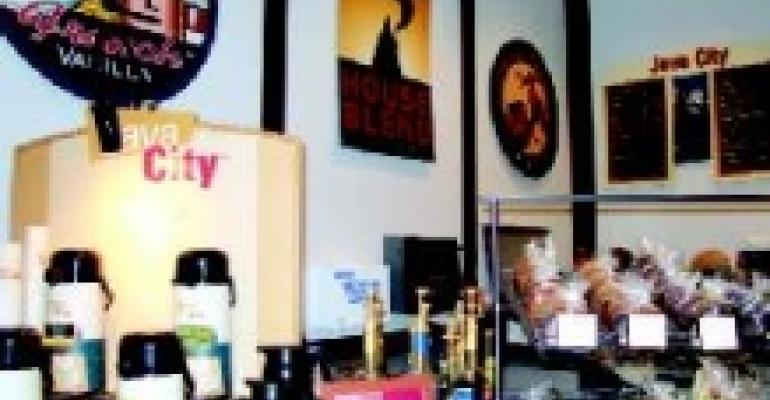 Coffee used to be so oldmannish you could practically see its liver spots and ear hairs. Cool teens might consent to drink a cup if they were at a family gathering, or desperately cramming out a term paper at one in the morning. But to be seen drinking it where other cool people could see them? Uh uh.

Of course, that was BS— Before Starbucks. Now, trendy coffee shops are not only cool places to hang out for teens who can't legally patronize taverns and bars, but dispensers of beverages prized both for their branded and their chemical buzz.

So, what about that old/new saw that caffeine is not good for young, growing bodies? Anyone who has ever seen a teen chugging a can of Mountain Dew knows the answer to that question has been entangled amidst cultural, demographic and marketing forces for decades. In fact, caffeinated bottled and canned beverages are huge sellers to the under-18 crowd and have been for years. So it's only natural that the most traditional of caffeinated quaffs might want to join the party.

"We were seeing a significant volume of students coming into the high school in the morning with Starbucks drinks in their hands," says Jennifer Marr, director of Aramark's operations at Northwest ISD near Fort Worth, TX. "School didn't open until nine, so that gave them time to stop there even though the coffee shop was actually 20 miles away."

So the school decided that if you can't beat them, you might as well join them. Thus was born the Java City Cafè outlet in Northwest High. Open from 7:30 in the morning until 4:30 in the afternoon, it completes an average of about 300 transactions on a typical day, many of them sales of caffeinated as well as non-caffeinated coffee beverages to both students and staff.

Northwest's Java City outlet is one of five Aramark has opened in its high school accounts, generally at the request of the school, says Marr. In addition, the company operates "several dozen" mobile coffee cart in school environments and expects this side of the business to grow.

Other schools didn't need to have a nationally prominent contract management company help them get into the coffee business. They did it on their own.

The Paws Awhile Cafè, winner of one of Food Management's Best Concept awards (see the April issue) was established on a shoestring budget by an independently operated school foodservice program—Oak Park & River Forest (IL) High School. It highlights the relatively low entry bar—at least from an operational standpoint— to establishing coffee stations in schools. One employee mans the station from 8 a.m. to 2:30 p.m., while vendors contributed all the merchandising equipment and a parents group the tables and chairs. While coffee (Wolfgang Puck brand!) is one of the offerings, Paws Awhile also serves as a snack bar and lounge area that functions as a draw to the school library, on which premises it is located. It sells baked goods, smoothies, soft drinks and candy by the ounce.

Paws Awhile was established "to do away with the typical study hall," says District Food Service Director Micheline Piekarski. "It's basically the Borders Book Store idea of adding a food and beverage component to the reading space."

Coffee's reputation as an "adult" beverage, culturally though not legally, makes its presence in schools mildly controversial, but at least one district has used the beverage as a boost to student nutrition.

"One reason we decided to start a coffee bar in our high school was because it seemed a good way to get more calcium into kids," says Vicky Poole, principal of Valley High School in West Des Moines, IA. "In addition, we thought it would be a good addition to a community space we were planning for the school, since so many students seem to come to school carrying coffee drinks in from the outside."

Beth Hanna, RD, director of nutrition for the school, says she was initially skeptical but once she looked more closely at the notion she warmed to it. "I saw it as an opportunity because most of the drinks are milk-based, and many teens these days don't get enough calcium because they don't drink enough milk."

So Hanna researched recipes, working with a local vendor, and came up with a menu of offerings based on healthy amounts of skim milk, some topped with light whipped cream.

"The new USDA recommendations for teens include three cups of milk a day," Hanna says. "The iced drinks each have about half a cup of milk while the hot drinks like the hot chocolate have six to eight ounces. So we're getting at least a sixth of their daily milk requirement into them with each serving. We feel every little bit helps, and because the drinks are made with skim milk and light cream, we're limiting the calories."

The choices include various espressobased drinks (the station has an espresso machine), lattes, steamers and "frappes" (a mixture of malt powder, milk, flavored syrup and a shot of espresso served over ice). Right now, food is limited to cookies but the menu may expand when the station gets a full rollout in the fall.

"We did a 'soft' opening with no fanfare or promotion," says Poole. "It was basically a way to test the concept and adjust the recipes and offerings to see what was popular. We plan to have a full-blown opening in the fall."

Right now Valley's coffee bar is open from 7:15 in the morning until two in the afternoon (it used to be three but traffic lagged significantly as the school day drew to a close so it was cut back. Generally, one employee from the cafeteria staff (the bar is run by the nutrition services department) operates the station, with a second employee added during the mid-day rush). Hanna reports that the hot chocolate has been the most popular offering, but with the weather turing warmer sales of the iced drinks picked up later in te school year.

Other schools have also latched on to the coffee service idea in more modest ways. For example, the Mesquite (TX) High School library operates the Stormy's Brew coffee bar, but it only sells coffee before school opens in the morning.

"We only sell coffee before school so that it will not interfere with class time," says Nancy LeCrone, one of the librarians at the school. "Our cutoff in the morning is before the bell rings for first period. We did not want students late because they were getting a cup of coffee."

Stormy's has a standard pour-over machine with powder mixes for hot chocolate, French vanilla and English toffee flavored choices. LeCrone says the outlet was initially popular but interest has dwindled with the warming of the weather. However, in terms of the core purpose of promoting interest in the library program, Stormy's has been successful.

"Teachers now offer the coffee and time in the library during the day as a reward to students," LeCrone notes.