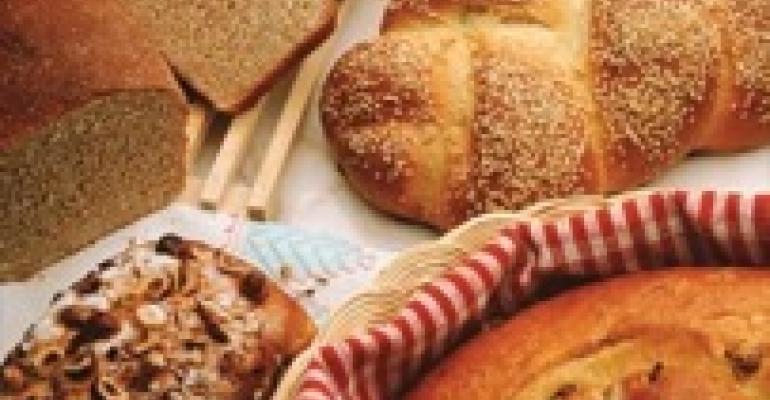 Have you been thinking about in-house baking for your operation? It's a sure way to differentiate your operation from competitors. With some baking skill you can produce items that will make your establishment memorable. In addition to skill, however, you will need a few pieces of equipment that you may not currently have. Here's a look at the equipment you'll need and about how much it will it cost.

Ovens. Ovens are the key equipment item needed for any on-premise baking function, whether it be traditional or a bake-off operation. The major types of ovens used in baking are the rack, rotating, convection and deck oven.

A rack oven will accept a full rolling rack holding 12 or more baking pans. The revolving oven is often larger than the rack oven. This equipment uses decks in the oven that are rotated like a ferris wheel through the cooking chamber. Even baking is accomplished by physically moving product through the various temperature zones in the oven rather than forcing convection. Both these types of ovens have application in large central bakeries or institutional environments.

The mainstays of the restaurant bake shop are the convection oven and deck oven. The deck oven is a must for any real baking. Many bakers get to know their ovens intimately and know the baking patterns and irregularities of each deck and the proper settings to achieve optimum results. Inherent in the nature of the deck oven is some irregularity in baking from top to bottom and side to side. Since there is no air movement within the oven cavity, there will inevitably be "hot spots" in the oven. Newer ovens have improved in evening the heat through insulation and better thermostats, but for many products, baking pans will still need to be turned or shifted during baking. Historically, the ovens with the finest temperature control have been made in Europe. These ovens have high-quality heated elements, low deck heights to minimize top-to-bottom temperature differences and heating elements at the top and bottom with separate controls. An experienced baker who is familiar with the oven can set what sometimes seems like a maze of controls for the most evenly baked products possible.

The standard deck of a deck oven is built of steel and made to hold baking pans. Most of these ovens are also available with a stone hearth; "hearth baked" breads and pizzas are made directly on this special oven deck. A hearth deck acts as a heat sink to store heat, but its temperature is usually lower than the oven air temperature, so the bread or pizza does not burn on the bottom. Getting a good deck oven is important but can be costly. Oven costs depend on size and features but can run from several thousand dollars to well over $20,000.

A convection oven is the other important oven to have for baking. Many baked items, especially pies, cookies and pastries, can be produced quite well in a convection oven. Typically, convection ovens cook at either a lower temperature or for a shorter time or both when compared to a standard deck oven. For higher production, convection is the best oven choice for many products like cookies, pies and cakes. An option available on most convection ovens is a two-speed fan. The lower fan speed is gentle and is less prone to splatter cake batter or meringues. Some ovens also offer the option of operating the convection fan on a timer, which will allow lighter products to set before turning the fan on. Expect to pay $5,000-$6,000 for a single deck convection oven.

Mixers and more. You will also need several other key items to do in-house baking. A mixer is a key item for mixing mix doughs and batters for baked goods. Often a typical kitchen mixer will suffice, but not all are powerful enough to mix heavy doughs, necessitating a dough mixer or spiral mixer, named for the way the mixing and kneading action is done. Large operations producing a lot of rolls or bread may need a specialty spiral mixer.

A typical kitchen mixer is usually supplied with a wire whip and paddle attachments for mixing different types of products. The paddle attachment will work fine for cake batters, but a dough hook may need to be purchased for mixing dough. The dough hook will give full mixing action, even to the sides of the mixing bowl, while mixing the dough with a kneading action. A pastry knife attachment may also be warranted if making pie crusts or flaky breads, which need shortening cut into the flour mixture. A large heavy-duty 60-quart mixer will set you back more than $10,000. A smaller mixer for batters and whipping will still cost $3,000-$4,000.

When preparing sheet cookies or biscuits in small quantities, dough is rolled out with a rolling pin and hand cut to the shape desired. In a larger restaurant, rolling dough by hand can be labor-intensive and not as consistent as mechanical dough rollers. A mechanical dough roller (sometimes called a sheeter) consists of a series of motorized "rolling pins" into which dough is loaded by hand or, for larger applications, by conveyor.

'If you are producing a lot of breads and rolls, a dough divider may be beneficial. The divider allows batches of dough to be divided into equal parts for products like dinner rolls. Mechanical dough dividers take a weighed batch of dough and automatically divide it into a set number of equal-size "balls" to be baked off as rolls. They are available in a variety of sizes and styles. For most restaurants, a manual tabletop divider is sufficient.

Yeast breads require "proofing," which is the process of warming the dough to allow the yeast to activate and cause the bread to rise. Proofing bread at home is often done with the dough in a bowl covered by a wet towel set in a warm place. The same principle is used in a commercial proofer. The cabinets are essentially a warming cabinet with a thermostat to control temperature. Most are equipped with a water pan to provide humidity control, which helps keep the dough from drying out while it is being proofed.

For the small restaurant operator, the oven-sized proofer mounted under a deck or convection oven is a space-saving idea that might be useful.

These proofers, offered by several manufacturers, use the otherwise wasted space beneath the oven as well as keeping the proofer in close proximity to the oven.

Ideal layout. Since baking is a process involving a number of steps, the equipment layout must be geared to the work flow, even in a small operation. It is important to consider the relationships of equipment items, especially with other pieces in the kitchen, such as mixers or ovens, that are used for the general food production requirements as well. Production needs should be addressed as the facility is being planned. In addition, the steps in preparing pastry and specialty breads will demand plenty of table space.

Do not forget to allow sufficient space for cooling product after it is removed from the ovens. Standard mobile racks or butterfly racks, especially designed for cooling baked goods, are flexible and can be maneuvered around the kitchen. You also will need to plan for the added burden the bake shop will put on your pot washer. Utensils and equipment are soiled at each step of the baking process.

As you undertake setting up a baking program or adding signature goods to your menu, remember the two main reasons for having in-house baking. The first is lowering your cost of baked goods and increasing profits.

Consider carefully whether you can actually lower not just your food cost but labor as well. Also, don't forget to factor in the cost of some new equipment, as discussed above. The second reason for doing your own baking is to produce a signature product that will bring guests back to your restaurant. Unique items are the reason most baking programs succeed.

Dan Bendall is a principal of Foodstrategy, a Maryland-based consulting firm specializing in planning foodservice facilities. He is also a member of Foodservice Consultants Society International. He can be reached at 240-314-0660.

The major types of ovens used in baking are the rack, rotating, convection and deck oven.