Pickling is an art that many of our grandmothers perfected in rural basements across the country. From those utilitarian roots, chefs have taken pickling to another level, with housemade pickles becoming a must-have for an awesome small-plates menu. Phil Huff, foodservice manager and chef at Union College in Schenectady, N.Y., brought his pickle skills to American Dining Creations’ recent companywide “Play With Your Food” challenge in which chefs at different accounts created something new and shared it with the rest of the organization.

Now, all of American Dining Creations college accounts offer a daily Ninja Pickle in their eateries to go along with deli sandwiches. The classic bread-and-butter pickle has been the most popular so far, but Sriracha kimchi pickles and sweet and sour maple pickles are close behind.

Among higher education foodservice pros, it’s no secret that while their tastes tend to be more adventurous than ever, there are still plenty of college students who crave chicken tenders 24/7. Another winner of American Dining Creations’ “Play With Your Food” challenge is

Liberty University, taking a page out of Blue Apron’s playbook, is offering Savor Box, a boxed meal program geared toward the busy days of the campus community that doesn’t live on campus. “Life gets busy, and we at Liberty Dining Services get that,” says campus RD Rachel Sanders. “This box provides a complete meal packed with good nutrients, so students can savor more time with what matters most to them and stop stressing about what’s for dinner.” Offered at three locations, Savor Box is available for a meal swipe plus $1.99 or for a retail purchase price. Packaging is environmentally friendly and recent meals have included tandoori chicken, rice and cauliflower; Asian steak salad; and chicken marsala with green beans. Here’s to school-life balance with nutrition included!

This wrap has achieved legendary status at Loyola Blakefield, an all-boys prep school in Towson, Md. “To say this is a popular sandwich is an understatement,” says Director Wayne Kirkley. “This sandwich is a day unto itself. It’s like a holiday that comes every Tuesday.” Even students who never normally purchase lunch will bring money just for the spicy buff, a wrap that starts with a 12-inch tortilla, diced chicken tenders and spicy barbecue sauce. Then, “the fun begins,” Kirkley says, with the addition of French fries(!), ranch dressing, blue cheese dressing, bacon, lettuce or cheese or any combo of those toppings.

Chilled avocado soup for the win

At The College of New Jersey, avocado is having its day in the sun not in the form of the more predictable avocado toast, but puréed in a sophisticated chilled soup with soy milk, citrus juice, scallions and cilantro, poured into a goblet then crowned with sweet shredded crabmeat.

Center-to-Table Gardens, 88 aeroponic towers on site, provide the culinary teams at several Centerplate accounts with a harvest of about 3,500 plants every six weeks. The towers are a great conversation piece for lobbies of convention centers, but the Centerplate chefs have taken things even further, incorporating the harvest into catered event, even featuring plants in water with roots still attached at serving stations and chefs slicing away at a living mushroom log to make the freshest salad guests have ever experienced.

A forward-thinking approach to training
scyther5/iStock/Getty Images Plus

“When you look at school food, the challenge of moving to more of these scratch-speed recipes is the skill set of the staff, so we invest in training new staff and existing staff,” Span says. “We’ve been investing in culinary basics like knife skill training and how to make stocks. As a result, now we have dishes on the menu that use those culinary basics and what we’ve found is the more the staff receive the training, the more confident they are, and the more confident they are, the more open they are to new ideas.”

The K-State Student Union is home to Union Station by JP’s, a gastropub complete with its own signature burger: The Pit Burger. The patty is a half pound (come hungry!) of certified Angus beef from the beef processing unit on campus. Then comes the delicious insanity: a huge hunk of pulled pork, melted cheddar, candied bacon, fried jalapeños and housemade jalapeño-blueberry barbecue sauce. Students like that sauce so much they have been asking the dining team to bottle it.

When Boston College’s dining team put on a Haitian pop-up dinner, one of the standout dishes was this comfort-food soup that you never knew existed: joumou, a velvety pumpkin soup with cabbage, carrots, turnips, squash and Scotch bonnet peppers. Get the recipe at food-management.com/recipes.

At Sam’s Club Home Office in Bentonville, Ark., the employees have been in for some surprises from new executive chef Daniel Concepcion, who has been creating pop-ups, featured items and exciting LTOs nonstop since he started earlier this year. That includes stepping up the barbecue game and creating signature spice rubs for pork belly that’s out of this world.

Salad bars are fresh, bright and kid-friendly at Marin Country Day School, where specialty salad mixes and crunchy slaws are made in house and many ingredients come from local farms and the campus garden. Using naturally colorful ingredients makes it easy to make a salad bar statement.

A giant ice cream sundae is never a bad thing, especially when it’s one of the monotony-busting pop-ups happening all through the year at Quinnipiac University in Hamden, Conn.

Maurizio Persichino, executive pastry chef at the Vancouver Convention Centre, operates a scratch baking and pastry kitchen that supplies 500 events per year with expectation-defying items like these praline yuzu bites, which have become something of a signature—stunning even when made for a crowd of 2,000.

“In Vancouver, we have a strong Asian community, and it’s like East meets West,” Persichino says. “The citrusy flavor of yuzu really mesmerized me. I said, ‘Let’s play with that chocolate and citrus,’ and some said it was too ambitious, that the flavors would be too strong, but it’s been a signature dessert.”

To kick it into high gear when the guest list is in the thousands, Persichino and the pastry team will begin baking a few days ahead, assembling the bottom layer first and building from there, a carefully orchestrated plan that Persichino says never requires a plan B, because that makes the team push harder for perfection.

This labor of love was featured in a local competition in which the Vancouver Convention Centre pastry crew participated in. Working with two helpers, Persichino says it took a few days to make this chocolate visage, and the eyelashes were the hardest part. The chocolate lady’s face isn’t based on anyone, by the way…she just emerged like a sculpture.

“I think I’m very fortunate to have been in this business 34 years,” says Persichino, who grew up in Italy where he fell in love with pastry in his family’s shop. “I do what I really want to do when I go to work. People ask me what I was doing before pastry? I say pastry. I do it because I love it. I always say, ‘I don’t make pastry…I make smiles.’”

Senior diners are changing, and just like younger generations, the “new seniors” enjoy small, shareable plates. That’s the trend Drew Ward, executive chef with Morrison Community Living at Sharon Towers in Charlotte, N.C., is tapping into with his new collection of small plates for seniors, including this country ham board and also deviled eggs, chicken sliders and focaccia with charred eggplant dip. 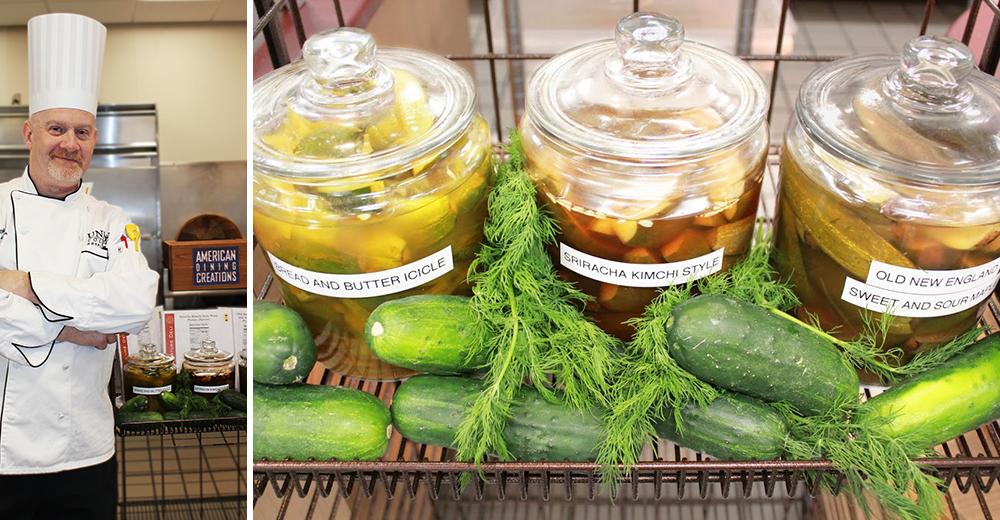