Allyson Tokarek, executive chef with Metz Culinary Management, brings some finesse to school dining at The Kiski School, one of the oldest private, all-boys, college prep boarding schools in the country.

Here’s a trick you maybe haven’t seen before: Using a handheld smoking gun loaded with hickory wood chips, Tokarek says “stick ‘em up” to a cheese board. Within seconds, the cheese takes on the flavor of the wood chips and there’s no heat applied to the cheese, just hickory goodness!

Tokarek spreads a homemade ice cream recipe onto an anti-griddle that freezes the mixture into sweet rolls as they’re mixed with raspberry coulis and chopped cookies.

Soft-poached eggs in a sous vide machine means perfect poaching for dishes that require a beautiful egg on top.

Who doesn’t love elotes, the creamy, crunchy, zesty Mexican street corn on the cob? But not everyone loves to struggle with eating it! Especially at a fancy event. Enter the elotes corn salad, created for summer catering at the Indianapolis Zoo.

Kids at Vestavia (Ala.) Hills City Schools, are loving the classic combo of watermelon and feta cheese with this summery grab-and-go salad option.

Mille-feulle cakes have layers to love

French food is getting noticed by a new generation of chefs (see Menu Mix, p. 24), and with good reason. At Sea World San Diego’s Seven Seas Food Festival, the dining team put together a menu that took a deep dive into the best seafood from around the world. Dessert was French-inspired, the gateau Napoleon, aka the mille-feuille, is a layer cake, yes, but nothing like Betty Crocker. The layers are delicate perfection, and while there aren’t quite a thousand layers as the name suggests, these cakes are showing up a lot on Instagram feeds lately and are an infinitely more sophisticated way to cake.

Another French culinary tradition that could be due to make a comeback? Canard a la presse. It’s a 19th century tradition being done in a new way by Pittsburgh chef Christian Frangiadis, starting with a dry-aged duck, breaking down the enzymes and shrinking the duck down to half its size. The duck is drizzled in lacto-fermented mango-scented honey before roasting to rare. Then, the magic happens: The duck is wheeled out to diners on a cart where it’s carved and then run through the metal press; it gets even more flavor from an elixir that includes wine, butter and koji (fermented culture) water.

No ‘flash in the pan’ equipment

Chef/Dining Director Johnny Curet at Rice University in Houston is totally psyched about a new piece of equipment, which he found at the National Restaurant Association’s annual Chicago show. As Curet walked the floor, “there’s thousands of items you see, walking for a day and a half, trying to find what’s new and will really make you better.” A braising tilt skillet that combines some elements of a pressure cooker looked promising, and also as it had staying power (Curet says he’s simply not interested in equipment that’s too trendy or limited to just one use—a “flash in the pan,” he calls it.) Training was also key. In order to get the most from any new investment, you need to find out what it can do. Otherwise, you’re just using a fraction of what you paid for, Curet says. The Rice dining team had a visit from a professional chef who teaches for the manufacturer, someone they felt a connection to immediately because he comes from the industry.

Currently, the new tilt skillet is in full effect at Rice, making labor less intensive for traditionally slow foods like pot roast that used to take days. “We’ve seen this resurgence in comfort food and a return to rustic cuisine,” he says. “Now we can do that in a way that is efficient but also truly helps us savor the flavor. It cooks 80% faster, everything is very tender, it retains moisture and eliminates some packaging.” That’s especially true for canned beans, which Rice has replaced with dried beans in bulk thanks to the “tilt skillet on steroids.”

What honey can do for your menu

When you’re sourcing local ingredients, there’s an amazing workforce who might be escaping your notice even though they’re making something great: your local bees! Recently, the local honey helped launch Florida State University’s recipe to national fame when a basketball recruit praised the crispy-crunchy-sweet-n-sticky chicken on ESPN. There are all sorts of new ways to honey nirvana that put the honey itself on center stage, from tableside honeycombs, as served by the Culinary Vegetable Institute/Chef’s Garden in Ohio, or the Flow Hive, a new invention that’s basically honey-on-tap for your urban garden.

When we think of foraging, the setting is usually an idyllic forest with mushrooms and sagebrush underfoot. But you can forage anywhere, it turns out. Ever seen a dandelion? Then you can forage! “The Urban Forager: Culinary Exploring and Cooking on L.A.’s Eastside” by Elisa Callow goes way beyond native sidewalk plants, though, taking us into the multicultural neighborhoods of L.A. by way of recipes passed down from people who live there: farmers, food makers, grandmas, sustainability leaders and more. Lots of cool recipes for soups, dips, pickled veggies, jams and main dishes with lots of Latin and Asian influence to be foraged here.

The great thing about buddha bowls is the fact that there are endless combinations of what you can showcase. This gorgeous example is from McMaster University’s event with The Humane Society of the U.S. (HSUS).

When we hear the old adage “you eat with your eyes,” that’s especially true for the humble banana. Just a few spots and the poor ‘nanners are overlooked by students looking for a healthy snack. “We always have bananas that are turning brown, and students just won’t eat them if they become the slightest bit over-ripened,” says Dartmouth Director of Dining Jon Plodzik. “But boy will they line up for Yonana!” The Yonana machine purées frozen peeled bananas into “nice cream,” which has been a huge hit with students. “There are no added juices or anything else,” Plodzik says. “Just frozen peeled bananas that may have become waste. It’s a welcome surprise within our offerings.”

Penn State’s dining team loves to explore the flavors of Middle Eastern and Indian food. At an event with the American Lamb Board last fall, lamb curry was served with rice, pitas and peas. More recently, a new kitchen contraption, the “kebob-o-matic” has brought an ancient art into the 21st century with multiple prongs that help kebob meat get roasted to succulence, in big volume.

After a long, cold winter, students at Dartmouth sprang into action when maple syrup sugaring time finally rolled around in late February/early March this year. “If you’ve ever been into a sugaring house where they take the sap and boil it down into the final product of pure maple syrup, you know how simply awesome the smell is. It’s like eating a sweet dessert with your nose!” says Jon Plodzik, director of dining at Dartmouth, where a sugar shack was the site of a “spring is finally almost here” festival with sweet maple treats for the community.

Josh Ingraham, system executive chef with Morrison Healthcare at the Cleveland Clinic, is known nationally for his alter ego, The Chef In Shape. He’s competed on the Rock’s “Titan Games” on NBC, the result of a reckoning with his own bad eating habits (scarfing down chicken tenders over a trash can in the middle of another busy day), something a lot of chefs struggle with.

“I think we all can agree that there are foods that we will admit our undying love for and you use up all your willpower making other decisions at work and in life, and that leads to moments of weakness,” Ingraham says. “My question to you though, is it really love or is it a habit-formed addiction? Yes, I’m a chef and I love food…and there are plenty of reasons to love your food, but just make sure that your food is loving you back with good health. Ingraham has developed recipes like coconut latte overnight oats that help with the move away from processed foods and into treats that fuel the body for busy days.

Finally! For years and years, food trend trackers have been waiting for the lovely, complex (but let’s face it, intimidating to Americans) flavors of Indian food to come to the forefront. The wait is over, and the inroad has been fast-casual serving styles. Through familiar vehicles—burritos and bowls—Indian butter chicken, tikka masala, paneer and more are warming hearts, as seen here at a recent “restaurant takeover” at USC.

At the American Sector Restaurant & Bar, within the World War II Museum in New Orleans, the “Victory Garden-to-table” menu pays tribute to regional and Southern favorites, focusing on the rich culinary culture of the city, not omitting the Mexican influence and Tex-Mex cuisine, as seen with these pulled pork nachos.

We all howl for ice cream

At North Carolina State University, the history of dairy farming runs deep. A new dairy museum was just unveiled, and the Howling Cow Creamery is making fresh ice cream for the campus community with lots of new flavors in the works. 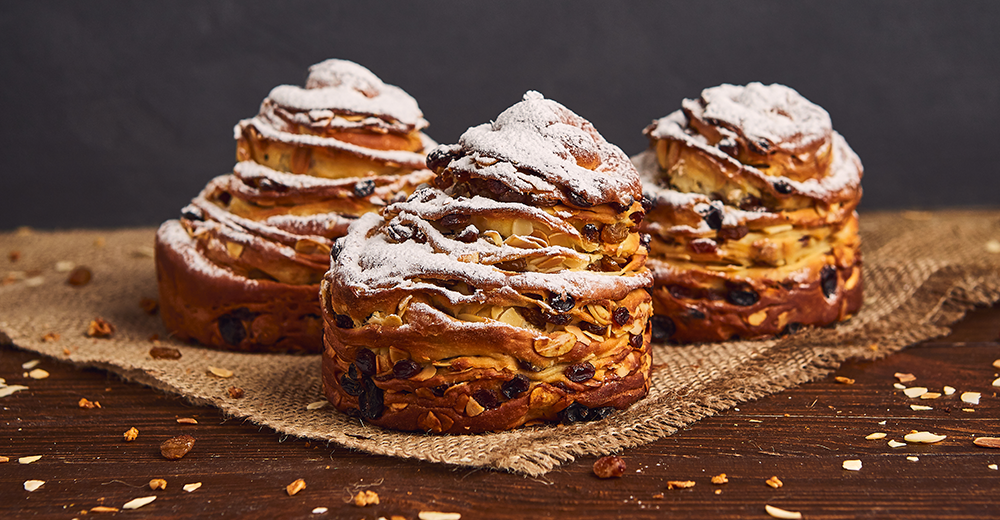 Next Up
Flavor of the Month: Elote, a Mexican street food mainstay
Start Slideshow ›