7 Recipes That Get Kids Hooked on Fish 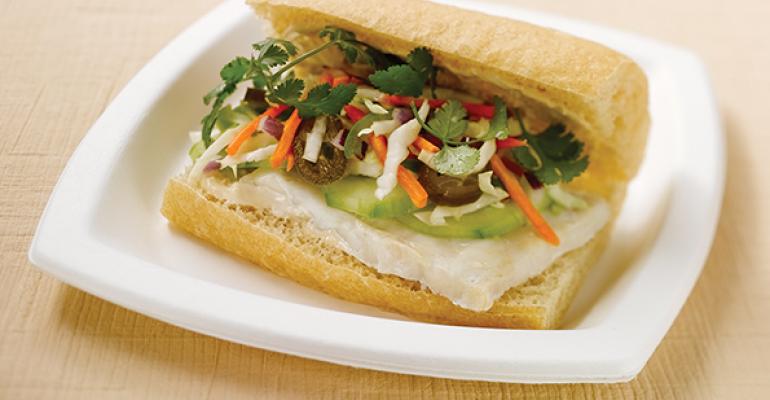 Even though it’s abundant, cost effective and healthful, school dining directors are often reluctant to menu fish because they’ve seen kids turn up their noses at fish sticks for years. Part of the problem, says Lisa Feldman, director of culinary services at Sodexo’s schools division, is that fish recipes for kids are stuck in the ‘70s.

“People have a preconceived notion that fish will taste and smell like a fish stick and it will have tartar sauce,” Feldman says. “That was awesome in 1974, but today, that high school kid is going to reach for the fish banh mi with sriracha mayo every time.”

Feldman and the Sodexo K-12 culinary team teamed up earlier in the year with the Alaska Seafood Marketing Institute to develop recipes for pollock, a whitefish with a mild, cod-like taste and a flaky texture. The fish in the recipes is often times in nugget or stick form, but with whole muscle fish (not minced). It’s also available as a commodity and makes up the protein part of a reimbursable meal. But Feldman realized none of that matters if kids won’t eat it.

So the team developed—and tested—a dozen easy-to-prepare recipes that meet USDA guidelines and are not proprietary to Sodexo, so any school district can give them a try. From a pollock quesadilla (“Pescadilla”) to a spicy pollock sandwich to Pollock Parmigiano, these items were developed with maximum modern kid appeal in mind.

During the past year, Sodexo chefs tested the recipes at the Gig Harbor (Wa.) school district. The recipes were divided into three age groups (K-12, grade 6-12 and grade 9-12) and kids not only tried fish, but liked it and got excited about the cool new menu items, Feldman says, especially the fish taco that “sells like gangbusters.”

“The best way to get them to try it at first is to offer free samples the day before,” she adds. “Get little 2 oz. cups and portion it out. Then they’ll find out that this doesn’t taste like a fish stick—this is delicious.”

And the next day, they’ll order it, Feldman says, adding that at one location, fish normally had a “take rate” of 10 percent, but the day after a free sample, the take rate went up to 40 percent.

Another key component to making fish more appealing to kids is cooking it correctly, Feldman says. “We see people overcooking it all the time, holding it too long and holding it too hot.” These recipes lend themselves to simple made-to-order setups, so each fish “naanwich” or taco is fresh and not at all soggy.

Each recipe qualifies as a reimbursable meal, and although the flavor profiles are wildly different, each is based on a similar school-lunch blueprint: a grain, protein (the Pollock) and a vegetable (slaws are used as an easy-to-prep component on a few of these recipes).

In addition, new takes on the old fish standbys fish sticks and fish sandwiches mean bolder flavors in the forms of dips and sauces. Take a look and see if one of these lunch items could reel in your young diners.

One On One With: High school signs Food Forward pledge to increase meatless options
Oct 18, 2021