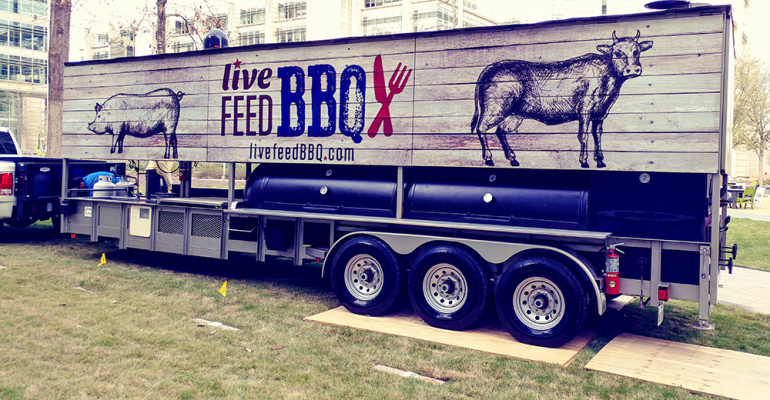 Brisket to believe in

In Texas, barbecue means one thing: Brisket, a tough cut of meat that becomes downright heavenly in the hands (and smoker) of a capable pitmaster.

“The Beast” is a custom-built traveling smoker that Houston-based Chef David Peterson operates for Eurest/Compass Group, bringing the mouthwatering aroma of brisket and other smoked items to events at accounts all over Texas with the Live Feed concept. And the barbecue roadshow is branching out to more locations.

“The farthest we’ve gone out is Arkansas,” Peterson says, “but we’ve had requests to come out to New York, Florida, California…”

In its three-and-a-half years of operation, Live Feed has served tens of thousands of pounds of brisket from an 11,000-pound trailer that can hold about 3,000 pounds of food and feed 5,000 people at a time.

Post oak is the wood of choice for Peterson, and he doesn’t use pellets; just about 40 or 50 pieces of wood at a time that requires warming up and then careful watching in the wee hours of the night: essentially, what barbecue is all about, patience. 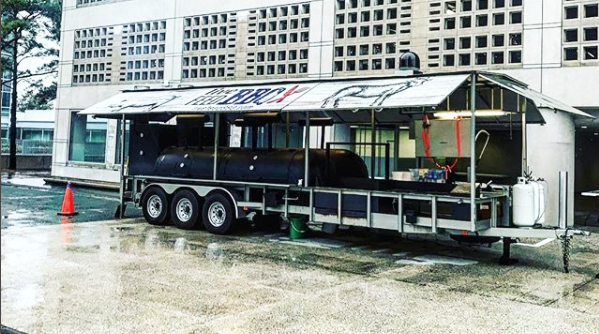 “When you roll up in this truck, you become an idol or rock star…it’s super cool…people are asking for food, but it’s going to be a good 20 hours later,” Peterson says. “There’s nothing automated about this. It’s touch, feel, smell and sight…it’s a complete sensory thing that I’m doing when I do barbecue.”

Peterson splits his time between being pitmaster of Live Feed and serving as district chef for the Houston market.

When it comes to brisket, he follows the gospel of Franklin Barbecue (the famous barbecue joint in Austin), not only with the oak, but also with leaving a good bit of fat cap for a juicy, delicious brisket. “It depends on how marbled the meat is…sometimes I’ll trim off more fat.” Also, he uses turbinado sugar rather than brown sugar, because turbinado crystals take longer to break down and provide a better bark.

Texas: Home of the brisket

“Next to chili, barbecue is what Texas is best known for,” says Dax Schaefer, corporate executive chef with spice company Asenzya. “This is where you’ll find ‘BBQ beef brisket’ on just about every barbecue menu in the state.”

Schaeffer’s Texas travel tip? “Ask for the burnt ends,” Schaeffer writes in Asenzya’s e-book, Trending Flavors: BBQ. “They are the dark, crisp corners of the brisket that got more smoke than the rest. They’re rarely on the menu and often reserved for the cooks, but if you ask nicely and they have extra, they will gladly sell them to you.” 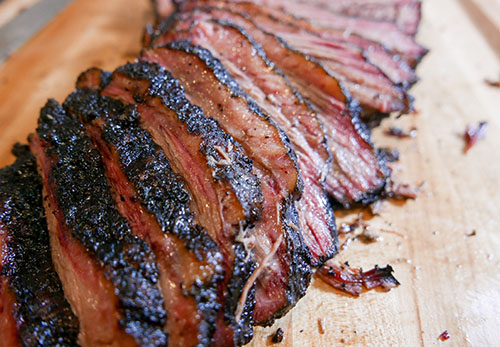 These brisket basics from Schaeffer’s e-book will get you started:

Time: Brisket can take anywhere from 12 to 18 hours

Rubs: Every pitmaster worth his salt has a great rub. Speaking of salt, it’s integral to getting bark (that amazing exterior on a great slab of brisket). Most brisket rubs are predominately half salt and half pepper.

Wood/smoke: Oak, mesquite and hickory are used most in Texas

Texas Tourniquet (aka Texas Crutch): Like most of barbecue, this method has its fair share of controversy. It means wrapping the brisket in butcher paper or foil during the cooking process once a desired color and smoke level has been reached to maintain moisture while it cooks (some pitmasters spray a Worcestershire solution on the meat at this point as well).

Central Texas: This region is what defines Texas’ barbecue identity. North of San Antonio, south of Dallas, west of Houston and east of Midland, this region’s barbecue developed in the 1800s along the Chisolm Trail, where ranchers would take their cattle north. The first barbecue joints popped up to serve travelers some of the undesirable cuts of meat along the way.

East Texas: This region features beef, but also pork, sometimes chopped and served in a sandwich. East Texas is heavily influenced by the barbecue traditions of the southeastern states.

South Texas: Getting into Tex-Mex territory, South Texas is influenced by Mexican barbecue traditions like barbacoa.