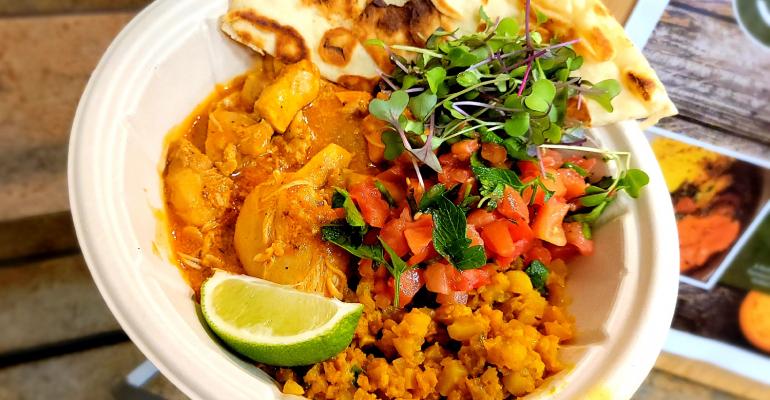 Building your best bowl menu ever

One-bowl meals are crossing the border from trendy to timeless. Check out the building blocks from chefs who have put together some un-bowl-ievable bowl concepts with super-fresh flavor profiles that span the globe.

When HHS Chef Chris McKenzie was looking for a new concept for Yavapai College that checked several boxes—customizable, healthy, engaging—he fell into bowls in a big way. He’s on the eve of launching Wok My Way, a new bowl concept for the Arizona college.

“One of the challenges at this school—at every school—is they are always talking about ‘variety, variety, variety’ and really beating that drum; they want options and they also want healthy food and fresh vegetables and something that allows interaction,” McKenzie says. “Wok My Way evolved when I sat down and looked at these bullet points of what they wanted.”

In addition to checking those boxes, the bowl concept is setting up shop in an underutilized area of the Rider Diner, Yavapai’s main dining hall. A long-term goal for that venue is a food hall-style gathering of “vignettes,” as McKenzie calls them, versatile-yet-focused mini concepts throughout, like Al Forno, which features “things from the oven…pizza, pasta, but also roasted chicken,” he says. Another concept focuses on the char broiler.

For Wok My Way, McKenzie and the team laid the framework for customers to participate in the making of their bowl. First, they choose a base—udon, soba or rice noodles, and also white or brown rice—then, three choices from an array of seasonal fresh veggies. Baby corn, zucchini and mushrooms will likely be on the opening menu. Next comes the choice of protein and a sauce. The sauces sound tempting: bourbon-teriyaki, honey-sriracha, sweet chili, hoisin and spicy peanut.

From there, the cook turns around with the ingredients and gives them a strong sear in the wok, which is specially fitted to induction burners. The customer gets even more involved, as they get the hot bowl and add garnishes like cilantro, crushed peanuts, fried wonton chips and chili crisp. 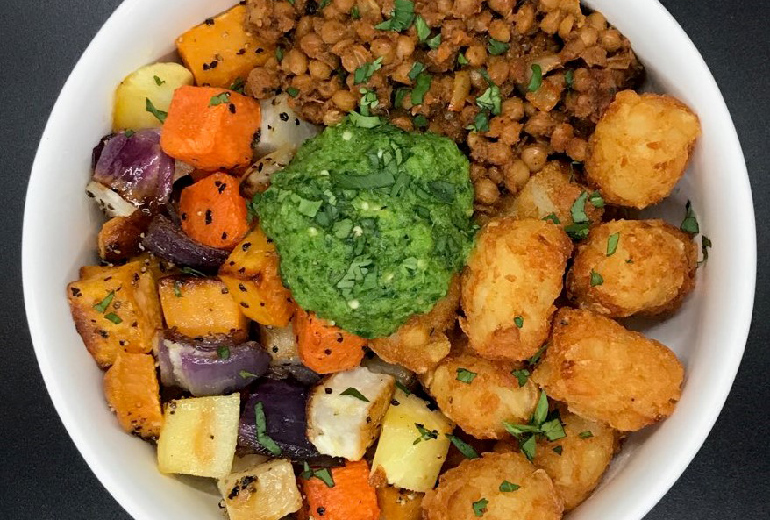 HHS partnered with The Humane Society of the United States for a line of Sustainabowls, including this root vegetable hash bowl that makes clever use of tater tots.

World in a bowl

HHS’ culinary team is no stranger to bowls. Global Bowls is an extensive initiative from Chef Marta Hernandez, VP of Culinary for HHS’ healthcare division. Hernandez zeroes in on the comfort and culture of bowls for this successful program, which since March, has helped boost cafe sales 20% and up.

“To me, bowls in general embody comfort,” she says. “I almost feel like eating out of a bowl connects us to our childhood. And they’re also convenient; in a world where are ‘go go go,’ it’s nice to have something that’s easy to eat, comforting and healthy.”

The criteria for Global Bowls is that each bowl represents a classic comfort dish from a region around the world interpreted into a single, cohesive bowl that incorporates six elements: a base, protein, vegetables, sauce, crunch and garnish.

“It’s about looking at the foods people like to eat and reconceptualizing them into a bowl,” Hernandez says of the bowl-building process. “We have already established a large menu offering of popular cuisines from across the globe, and now we are looking at how we can grow that even more. How can we take a gyro and make it into a bowl?”

Examples of Global Bowls created by HHS chefs include a Thai buddha bowl, a tikka masala bowl, a bibimbap bowl, a chirashi bowl and a beef tandoori bowl. 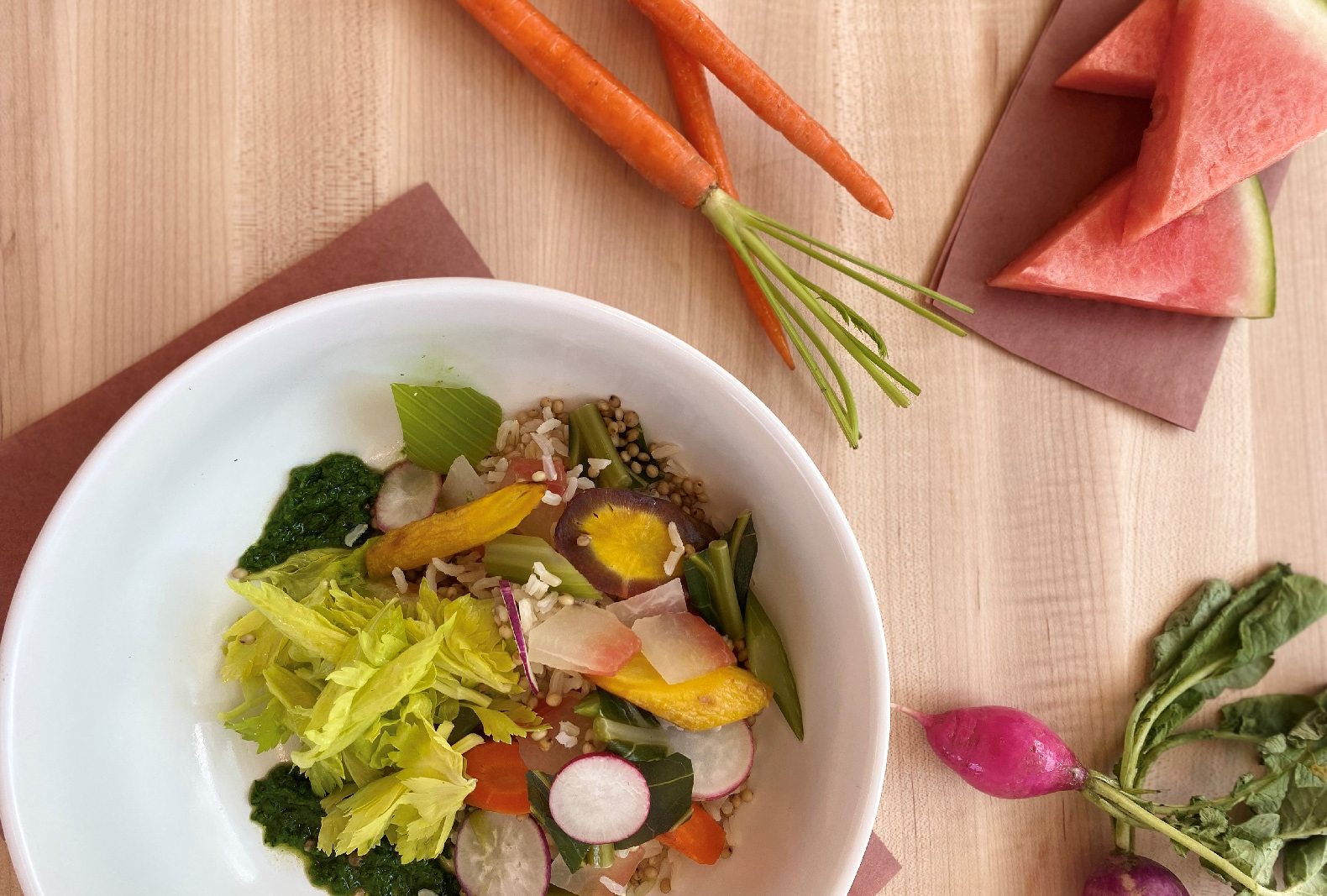 Bowls also opened the door for a partnership between HHS and The Humane Society of the United States (HSUS), which resulted in Sustainabowls, a plant-based bowl series. “These have been such a hit that they sell out almost every time and it has no meat on it,” Hernandez says. “It’s incredible to see people’s reactions” to bowls like root vegetable hash Sustainabowl and penne pasta Bolognese Sustainabowl.

A key meat-substitute ingredient in Sustainabowls is lentils, stepping in for chorizo like a charm in a roasted corn and lentil chorizo bowl, Hernandez says.

Speaking of sustainability, UNC Chapel Hill’s Aramark Chef Michael Gueiss has created the low waste bowl that uses ingredients that are typically composted. “Rather than compost, I created a healthy and hearty recipe that makes these items the stars of the dish,” Gueiss says.