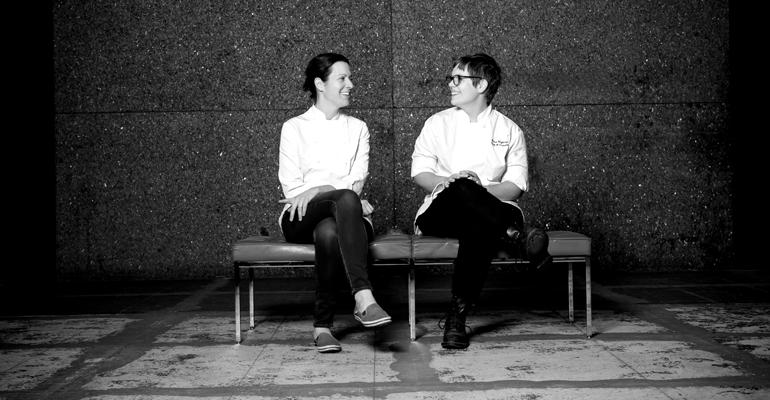 Café expresses the art of seasonality and great sandwiches

Pittsburgh chef Sonja Finn has opened a restaurant in the Carnegie Museum of Art, and the menu is meant to inspire with food that’s seasonal, locally sourced and expressive, yet totally real-deal and approachable.

Finn’s first restaurant, Dinette, is a downtown pizzeria and wine bar on the east side of Pittsburgh. She describes the cuisine as “real food made from real food.”

Finn brought that same sensibility to the Café Carnegie, along with one of her top employees from Dinette, Chef de Cuisine Becca Hagerty, who oversees day-to-day operations at Café Carnegie. Hagerty’s specialty is incredible fermented dough and ethereal bread in baguettes and pullman loaves.

The café, which seats 100 and opens up to seat about 20 more outdoors during the summer, opened in December with Culinaire as the management company. The process began almost two years ago, when Finn worked with Culinaire on a proposal for the café at the museum. During that time, she ran a grab-and-go operation at the Andy Warhol Museum (also in Pittsburgh).

Flavors of the seasons

Seasonality has always inspired Finn during her culinary career, and while the Dinette menu can change practically every night to suit what’s in season, the café at the museum has just one menu per season that stays fixed. That was an adjustment for Finn.

“When looking at the winter menu, I looked at what would be available until we hit spring,” she says, describing conversations with local purveyors of fresh produce, turkey, lamb and more. Responsible sourcing, sustainability and urban gardening are all things that Finn takes seriously. She scoffs at the idea of kitchen herb gardens that are just for show, proudly describing a 70-container garden on Dinette’s rooftop that supplies a large portion of the restaurant’s produce.

“A lot of people think that Dinette is Italian because we serve pizza. But I like French cuisine a lot and pizza is just cheese and bread… a vehicle or a format I can use to highlight fresh ingredients and try different things,” Finn says. “It’s an awesome way to have the creative within the familiar.” One of Sonja Finn's pet peeves is a club sandwich without the "club layer" of bread in between, so her version is true to the classic. Photo: Tom Litle

Another guiding principal in planning ongoing menus for the café is the fact that, in Finn’s eyes, a museum café should provide not just great food but also a sense of place and a sense of occasion.

“The Carnegie Museum is such an institution here,” she says. “When people come to this museum, you want it to be a representation of that area.”

At lunchtime during the week (every day except Tuesdays, when the museum closes), and at brunch on weekends, Café Carnegie is serving sandwiches, big pasta plates and salads. An attached coffee bar serves a limited menu during expanded hours.

One of the best-sellers at the café so far has been the club sandwich, another thing Finn is truly serious about.

“I put a classic club on the menu because it’s something I really like, but I don’t know if anyone would expect me to like it,” Finn says. “It’s one of my biggest pet peeves when it’s done incorrectly.”

Incorrectly, according to Finn, means omitting “the club layer” (that extra slice of toast in the middle of any self-respecting club sandwich).

“So Becca bakes the Pullman bread every day, and we use local turkey and local bacon, and then we put a tomato on it—that comes from a greenhouse in winter but you can’t do it without it,” she says. “I think there are not many places that really do a classic club. You almost have to belong to a country club to get one.”

Another popular sandwich is the leg of lamb sandwich, made with grass-fed lamb from a nearby farm. “I’ve been happy that’s been selling,” Finn says, “because sometimes people say they like lamb but only if it doesn’t taste like lamb. So this is grass-fed, free-roaming lamb that tastes like lamb and it’s been a big seller.”

The menu for brunch (served on weekends) includes luxurious items like oysters on the half shell, deviled eggs with Berkshire prosciutto, bocadillo de tortilla (a pressed potato sandwich with Latin flavors) and of course, a brunch club sandwich with house-cured salmon, pea shoots, herbs and caper mayo. The lamb in this sandwich is grass-fed and comes from a local farm. Photo: Tom Litle

And the kids’ menu is no slouch, either. Finn, who has taken her young son to museums throughout his life, recognizes what a big deal a museum visit can be to a kid.

“It was really important to me that we have a nice menu for kids,” Finn says. “I wanted stuff that was special. A museum trip is a special experience and it should be special to go eat with your parents there.”

The star of the kids’ menu has been le hotdog, inspired by hot dog stands in Paris that naturally use great bread. Hagerty’s baguettes are perfect for the all local beef hot dogs, which have also become popular with museum employees looking for a quick, inexpensive lunch.

At the moment, Finn says she’s already looking ahead to this summer at Café Carnegie, when local tomatoes will serve to inspire a new seasonal menu.