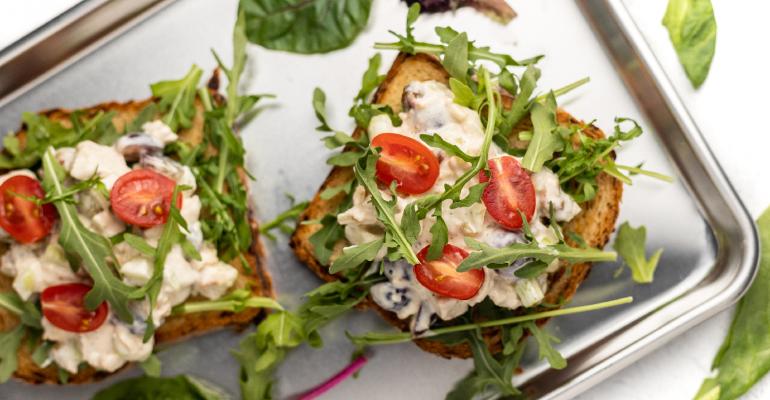 One of the most chilled-out, laid-back, portable menu items, chicken salad is as reliable as it gets…however, it can get pretty wild in the hands of creative chefs as they plan summer grab-and-go menus.

Chicken salad is one of those great “blank canvas” menu items: It’s up to the chef from the start. Mayo or sour cream or yogurt? Or none of the above? Celery or bell pepper? Dill or flat-leaf parsley? Is Dijon part of the equation? How about grapes? What’s your stance on curry powder? All of these are chef’s choice and as we found, the onsite chefs we spoke to are making some truly delicious choices when it comes to chicken salad.

Fit for a queen in Texas 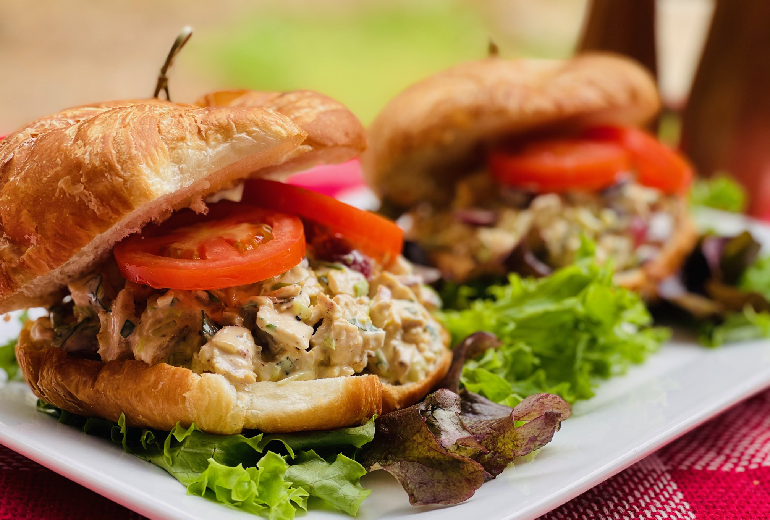 Sometimes called “coronation chicken” as it was served at Queen Elizabeth’s coronation many years ago, this combination of creaminess, sweetness and haunting Indian spices was a revelation to Granados the first time she tried it.

“When I first had it, I knew I always wanted to make sure my chicken salads—or any composed salads—were always layered with plenty of flavor profiles and textures. This one was no exception.”

Her curry chicken salad features “grapes for sweetness, toasted cashews for crunch and smoke, celery for more crunch, lemon juice for acidity, fresh herbs for earthiness and mayo/Dijon for creaminess,” she says, adding that since she’s in Texas, she’s got another trick up her sleeve for chicken salad perfection: “I grill my brined chicken for that charred taste us barbecue lovers enjoy…I think it’s a perfect combination for a summer salad.” 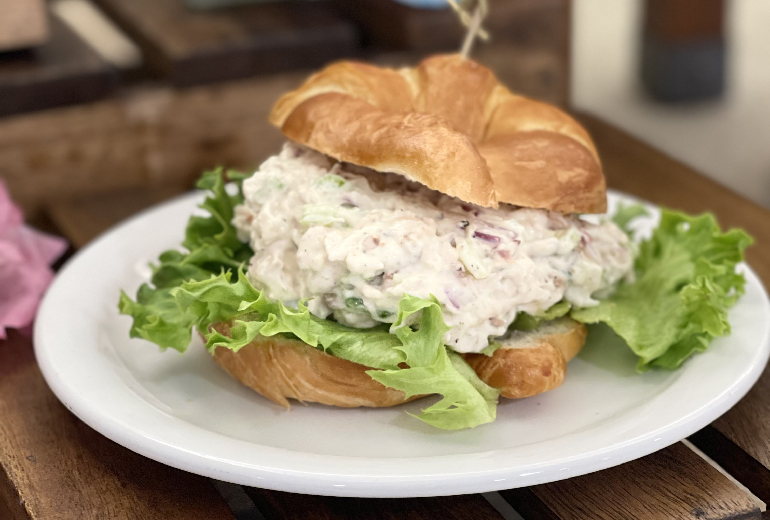 Cool, crunchy and customizable in so many ways, chicken salad is summertime grab-and-go superstar. This bacon-jalapeno version is a celebration of hospital cook Sherry Joyce’s 20-year work anniversary at Condell Medical Center in Illinois.

This May hospital Cook Sherry Joyce is celebrating her 20th anniversary at Advocate Condell Medical Center in Libertyville, Ill., where she’s been wowing the café crowd with a signature spicy chicken salad for most of those years. She calls it “a classic chicken salad kicked up just a notch with the jalapenos…delicious!”

Her recipe, which she shares with the community on recipe cards, calls for diced, cooked chicken, mayonnaise, diced red onion, celery and pickled jalapenos and crumbled bacon. She prefers to serve it on a croissant, a time-tested vehicle of choice for chicken salads, with its ability to stand up in a grab-and-go setting. 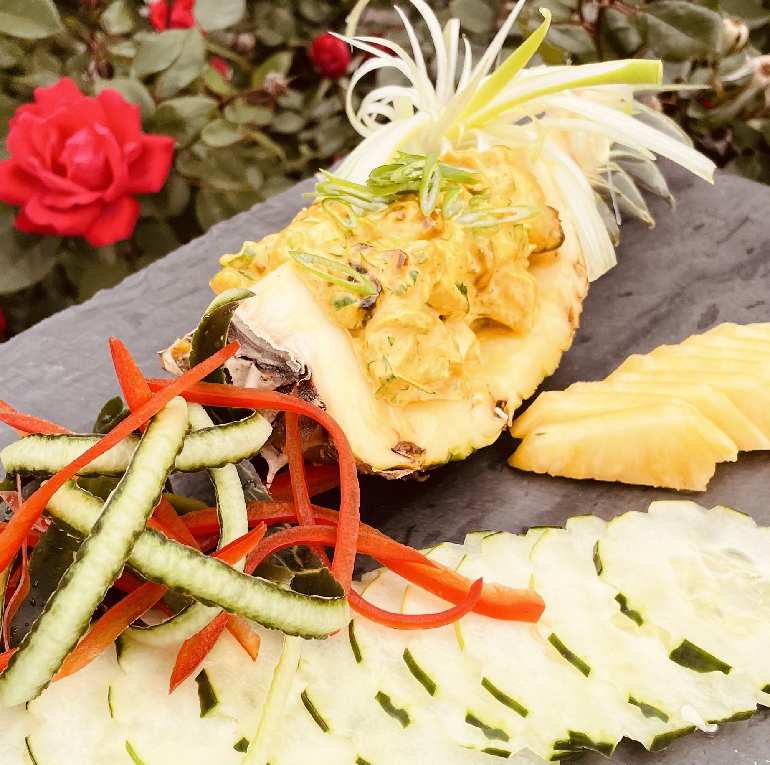 Duke Dining’s Executive Chef Mark Turner created this tropical chicken curry salad in a pineapple. His best tip? “The best advice I’ll share about chicken salad is to make sure you’re using the best chicken available, season or marinate it before cooking and make sure to cook your chicken so it’s still juicy. I cook until the internal temperature reads 167° and then a quick blast chill.”

All about that texture

For senior dining chefs, putting their own riffs on well-loved, homestyle food is a way of life. Chef Chad Myers starts with the essentials of a great chicken salad then builds on it at in his kitchen at Eagle Pointe Place in Dubuque, Iowa, a retirement and assisted living facility. And Myers has a secret ingredient that may surprise you.

“To me the essential ingredients for proper chicken salad are proper small-dice knife cuts (texture is everything), good quality chicken breast, poaching the chicken, dill weed and honey in the dressing.

“At a country club I worked at, the house recipe had honey,” Myers recalls. “I tried to change it once, but almost had a riot on my hands, so I’ll never make chicken salad without honey.”

His chicken salad starts with poaching the chicken in chicken broth, followed by the knife work while the pot simmers: brunoises and dices of celery, red onion, scallions and roasted red pepper. The dressing is mayo based and whipped up with the aforementioned honey, plus dill weed, Dijon mustard, lemon zest, apple cider vinegar for a hit of acid and a splash of hot sauce. Myers’ favorite hot sauce is currently Blis Blast, a blend of barrel-aged chipotle, arbol and cayenne peppers. A finishing touch: zesty togarashi (a Japanese spice blend with chiles, orange peel, sesame seeds, ginger and seaweed) on top. 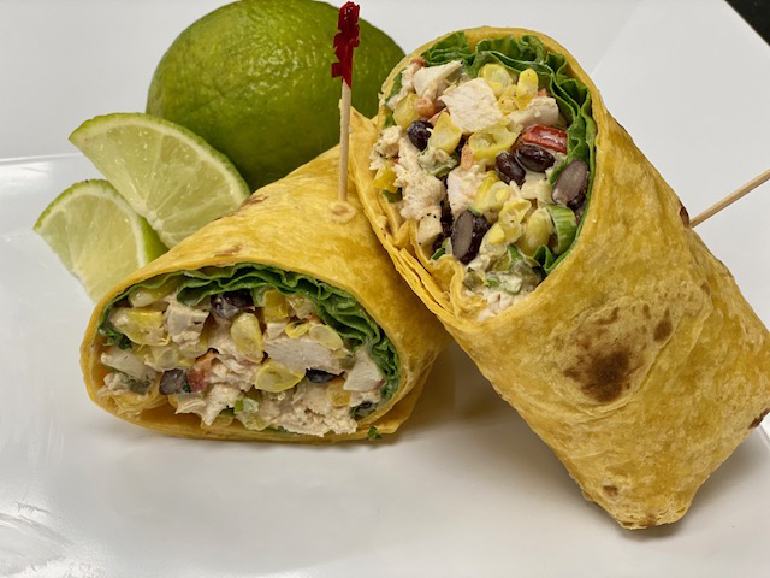 The recipe for these Southwestern chicken salad burritos came to Metz Culinary Management GM Heidi Hickin in a dream.

While Heidi Hickin, Metz Culinary Management GM, slept one recent night, visions of a Southwestern chicken salad recipe came to her in a dream.

“When I got into work, I just had to create the recipe from my dream,” Hickin says. “It’s a nice summery chicken salad with a lot of crisp veggies in it. The lime and cilantro bring a freshness to it that just screams summer! It’s a mayonnaise base, but it has a lightness to it that traditional chicken salad does not have.”

Her mayo base is flavored up not only with lime and cilantro, but also with taco seasoning, cumin, hot sauce and chili powder. To the base, she tosses in diced cooked chicken, black beans, corn, peppers, onion and jalapeno.

The cool thing about this Southwestern chicken salad is it can be served in a burrito/wrap, creating a fun mashup. Served with queso and nachos, this is a great new direction for chicken salad. On a bed of fresh greens as a salad is another option.

Boston College Chef Bradley Shannon also headed south for his chicken salad inspiration. His version is a riff on Mexican street corn, or elotes. “Mexican street corn is a staple in the summer for me,” he says. “When corn comes into season in New England, I put it everywhere. I started to tweak street corn a bit in this recipe, as I moved away from the traditional corn-on-the-cob model.”

Instead, Shannon takes corn off the cob and mixes it with spicy chicken thighs and Mexican crema, then adds some acid with pickled shallots to balance the savory-sweet-rich crema, corn and chicken. “Serving these as a small app is a great way to change up a summer party,” Shannon says.