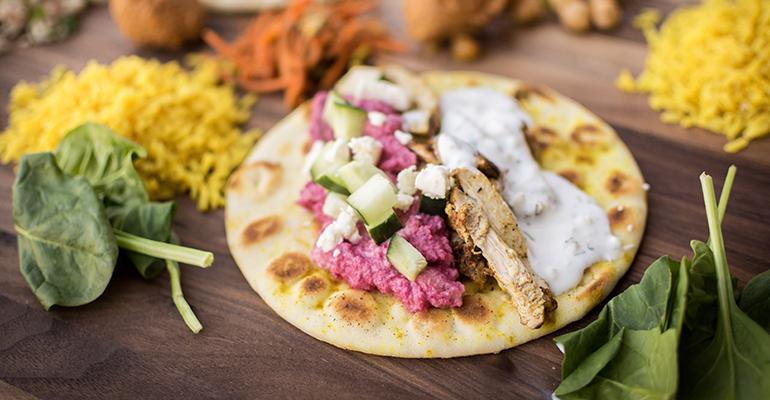 The succulent-charred chicken with bright spices, fresh veggies and a tangy sauce cradled in soft bread is a combination for the ages that’s getting a surge of popularity now. Here are the do’s and don’ts for making the most of chicken shawarma’s moment.

The Middle Eastern fast-casual trend is reaching new heights as it appeals to a wide range of customers. Concepts like Halal Shack, which began at SUNY Albany and opened this month at Howard University and Rensselaer Polytechnic Institute, are bringing items like chicken shawarma to American diners in new, on-trend ways.

Middle Eastern concepts and even just special menu items are drawing big lines and loyal fans. If you’d like to get on this train, there’s no better gateway sandwich than the chicken shawarma.

Maybe you first tried chicken shawarma at the all-night Greek place in your college town; or if you grew up in an urban area, the sandwich might be familiar from food carts lining the streets. 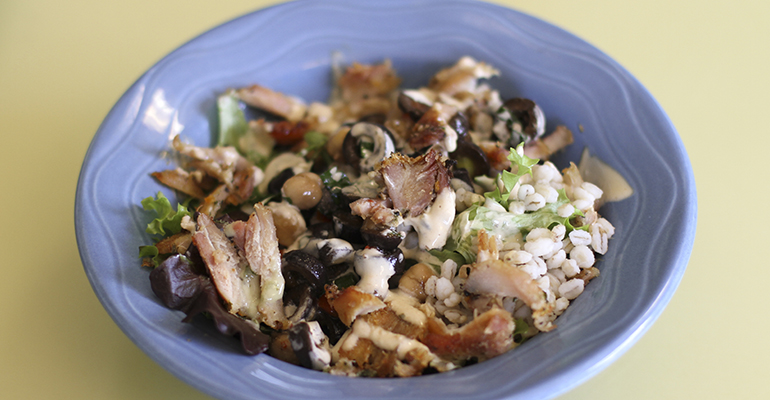 Historically speaking, chicken shawarma has roots in 18th century Turkey, where skilled chefs of the Ottoman Empire developed the technique of vertical roasting to preserve flavor using meat’s natural fat, which they called the doner kebab. The kebab became the gyro when it reached Greece. As the cooking method traveled through the Mediterranean into the Middle East, shawarma was born—an Arabic word for “turning.”

And it was in the Middle East that shawarma found its best flavor companions: a fresh, bright profile created with chopped cucumbers and tomatoes, tahini, hummus, pickled veggies and tabbouleh. Customization plays very well with shawarma, as does variation in how it’s served (think grain bowls, salads, even platters and bento boxes). In addition to having that “late-night craving” cachet, dietitians find that chicken shawarma is also one of the healthier sandwiches out there. Using these components, tailored to your market, it’s a great time to get your shawarma on.

Recent specials have included such cool menu items as surf-and-turf burritos, Southeast Asian fish and rice and “The Godfather,” a meatball-Parmesan-risotto bowl that the students couldn’t refuse. 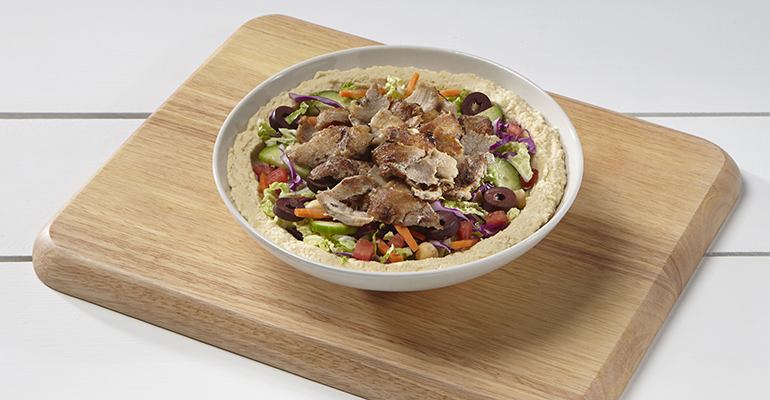 And chicken shawarma bowls have made an appearance, as well, combining colorful winter veggies (greens, red cabbage) with chickpeas, roasted chicken and that unforgettable creamy sauce. About that sauce: It’s traditionally made with Greek yogurt, lemon juice and garlic, but beyond that, customization can be a chef’s playground. It’s possible to upgrade the white sauce with fresh dill, good, fruity olive oil and/or the Middle East’s signature spice blend, bright and citrusy za’atar (dried thyme, oregano, sumac, marjoram and sesame seeds).

Bruce Cafeteria at the University of North Texas (UNT) is one of the most popular dining halls on campus, with its wide-ranging menu that features global eats, comfort foods, awesome veggies and more on a rotating basis. The new kid on the block, launched last year, is the fresh Mediterranean concept. Whole chickens are roasted on a vertical rotisserie and served in lots of combinations: on flatbread from on-campus Clark Bakery; over grains; in a salad with greens, olives and chickpeas. And then there’s chopped cucumbers and tomatoes and the choice of either vinaigrette or creamy sauce. 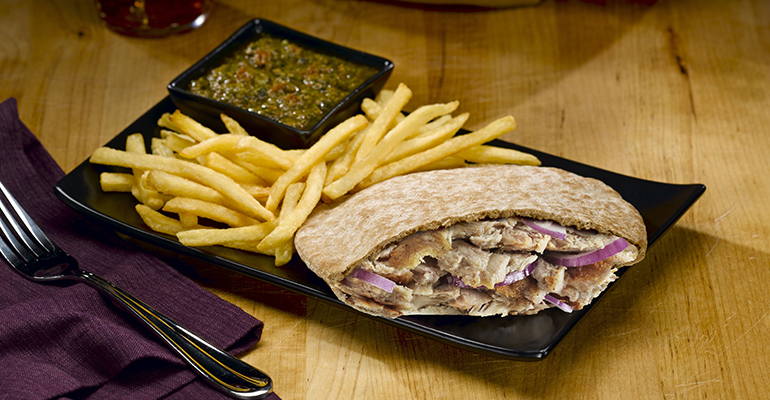 “Bright, vibrant, sharp. That’s the flavor profile,” says Scott Bullock, executive chef of resident dining at UNT. “Students are excited by the new and unique tastes and word is spreading.”

Since the concept opened, production has doubled to 40 pounds of chicken per day, and the dining crew expects that figure to keep climbing as the chefs at Bruce keep roasting chickens as the extremely succulent basis for the menu.

Here are some tips and tricks they’ve learned so far:

The intersection of flavors from this region was the inspiration for Elon University’s special menu at Clohan Hall. The star was chicken shawarma with customizable toppings, and the event also featured housemade Mediterranean salads, falafel sandwiches and an impressive five types of hummus.

Elon students jumped right in to customizing their own chicken shawarma and falafel sandwiches with the toppings, so the dining team is planning on making this more of a permanent menu item in the coming months.